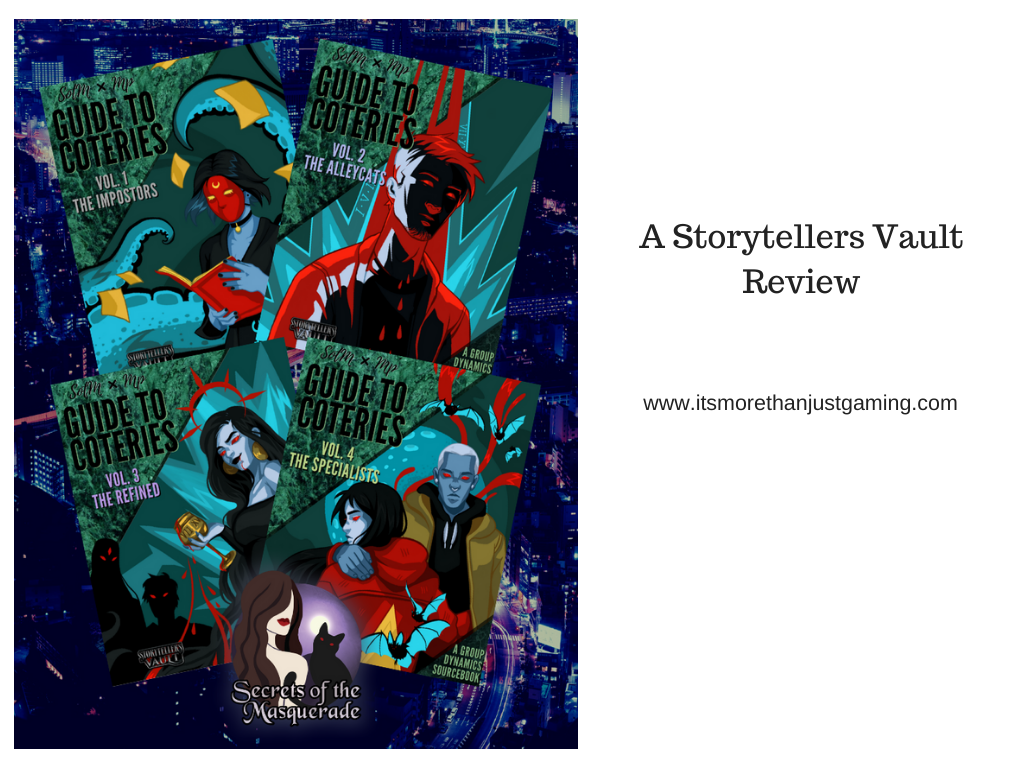 Hello everyone, welcome.  Today I am sharing another Storytellers Vault review from the creative workhouse that is Secrets of the Masquerade, and illustrated by Marina Papetti.  This product is called Guide to Coteries and is a supplement for Vampire: The Masquerade.  It is listed as compatible with 3rd edition/Revised and 20th Anniversary rulesets.  Disclaimer, I was supplied with a free copy of the bundle for review purposes.

I think the first thing that needs to be said is that Vampire: The Masquerade, as a roleplaying game, is not Dungeons & Dragons.  And by that I mean it is not set up to be a fully collaborative game where a bunch of characters come together to form an adventuring party, get rich, get powerful and go home (and yes I know, there are games and players where D&D is competitive, which is fine if that is what you signed up for but not the way I see it).  Vampire is different.  The setting, the context, all of the people you are likely to meet are, at best, allies or more likely rivals or even enemies just waiting to happen.  Vampire is the ultimate power struggle.  Unlike in the real world where there are chances of vacancies in jobs etc when people retire or move on, nobody needs or necessarily wants to retire in Vampire.  If you are at the top of the ant hill, you spent a lot of time getting there and don’t want some upstart player knocking you off.  Though, kings in their castles need their pawns so this is usually the best opportunity for players.  Of course, opportunity is limited so everyone else on your level of this undying pyramid scheme is naturally your competitor.  Circumstances like that don’t really allow for strong bonds of friendship.  However, Vampires do band together despite these circumstances and form coteries.  These coteries could be social, functional or merely a mutual defense pact, but they happen and Guide to Coteries is a supplement that deals with creation of them, their reasons for forming and gives 4 examples.

Note.  I am referencing the bundle here.  Elements of the bundle can be purchased separately if desired.

Included in this bundle are 4 premade coteries, The Impostors, Alleycats, Specialists and the Refined.  Each coterie has a different theme around it, several human character sheets with short backstories for them.  In each pre-made coterie there are notes for players on how to use/play them, and for storytellers on what sort of situations and stories the coteries exist for.  This also gives an idea of what kind of story you might consider using them as adversaries in.

The Alleycats – The Alleycats are listed as your basic direct action coterie.  Blunt instruments for action heavy(heavier?) games

The Impostors – A coterie of street smart neonates abandoned by their sires.  Ideal as unexpected underdogs.

The Specialists – This is the coterie you choose for the heist movie.  Enough said.

The Refined – Political animals, dare I say predators?, that use their disciplines and the city itself as weapons

Each coterie comes with a list of embrace conditions that matches their flavour, which is a nod back to Secrets of the Masquerade Guide to Siring(Link to my review), as well as several suggested clans that would embrace these individuals.  The embrace circumstances and clans each suggest what abilities and attributes should be added to the human character sheets making for quite a large number of possible combinations.  Finally within the main body of each coterie supplement there is an entry for each player character with a list of questions, one of which should be asked to each other player who is playing a coterie member and should be answered to determine how the group knows one another setting up the basic group dynamics.

This bundle also contains a “DLC” which includes additional embrace conditions and several other clans or bloodlines to choose from, and some printable cheatsheets.  There is also the standard disclaimer, feel free to mix and match the clans and embrace circumstances – it is your game.

The individual coteries are interesting concepts, and I personally like that they are supplied as humans with some assembly required.

The mechanical aspect of the coterie building is very good.  Some of it I already use to one extent or another, however there was still stuff for me to learn from this set.

The different coteries have their different themes so you aren’t really stuck if you have one preferred type of game.

The coterie themes are underpinned by Needs.  This, I liked as I quite often encounter character creation (in many games) that is about building an image of something or a facsimile of a beloved character, with no real needs which can lead to a shallow character.

The art was pretty good too.

I actually don’t have a lot to say here.  I can see utility in all aspects of this work.  I prefer making my own characters whether as player or storyteller, but I wouldn’t mind playing one of these characters in a one shot or short campaign.  I also could see benefit in using them as antagonists.  And I like the toolkit you get.

I liked this product.  I would use this.  Mostly for the process provided, as it is a pretty good toolkit, but I think it would make for interesting short campaigns.  Though, if I am honest with you, the players wouldn’t get to choose their sires or their embrace circumstances.  They could choose their characters and ask their questions to define the coterie dynamic, but then we’d do embrace circumstance and clan randomly.  After all, there are some really handy printable cheat sheets with all of those details on them that can be cut into cards and distributed randomly.  That’s just me, of course.  Probably my favourite Secrets of the Masquerade product to date.