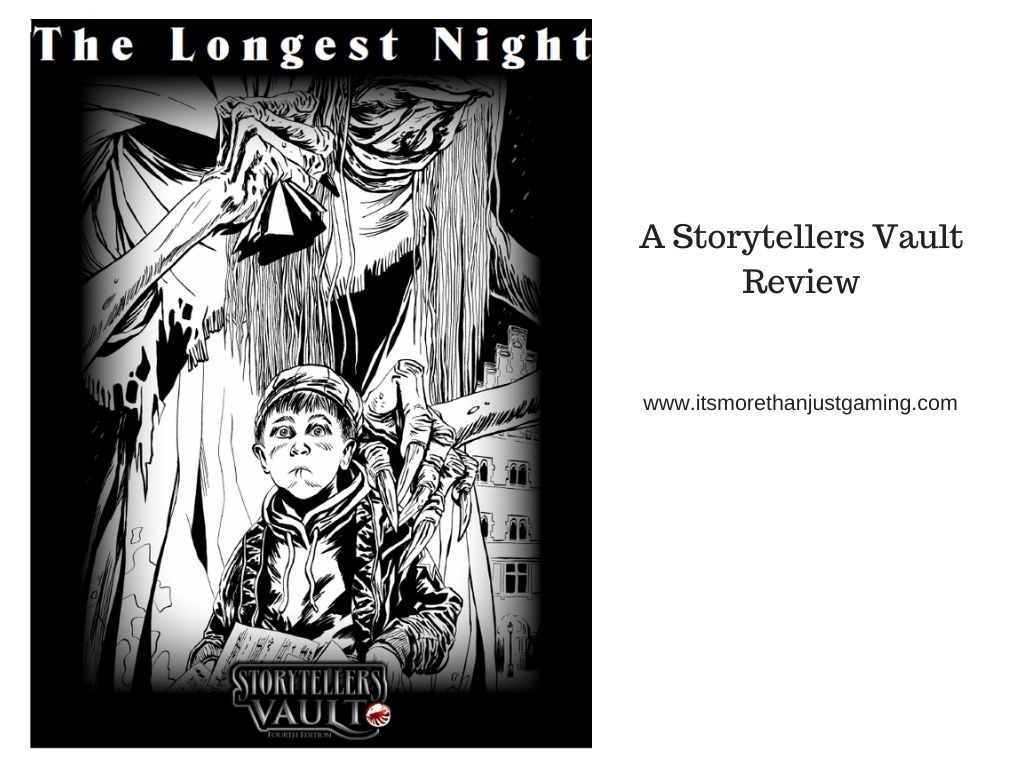 Hello everyone, welcome.  Today I am going to be sharing my thoughts on a Storytellers Vault compilation which covers various product lines and has a Winter/Solstice/Christmas type theme to it, called The Longest Night.

Disclaimers.  I was provided a free copy for review purposes.

The Longest Night is a compilation World of Darkness book that consists of a Vampiric Bloodline,a couple of pieces of short fiction, game content relating to the short fiction, Setting information for Dark Ages: Mage,  a setting for Wraith: The Oblivion and a Christmas oneshot that can be played as a Vampire, Werewolf or Human.

I’m going to have to break my usual format a bit to give a more useful overview, and as some pieces are linked by different authors and I think it is probably prudent to break up my overview by Author(s).

Kraft has supplied a Dark Ages: Mage short fiction telling the story of a mage in the Dark Ages setting looking for ALfheim.  The story is split in two following this mage in the first half, and then in the second half moving forward to contemporary times where a research team including mages is trying to recreate the journey and find an access point to the Bifrost Bridge of Norse legend

This story is called Wrapped in Winter’s Blanket and is followed by setting information for Alfar/Alfheim?, the realm of the nordic elves.  (Sorry, I am rusty on nordic realms)

The setting information includes locations players might encounter as well as statblocks and rp information for Light and Dark Elves, should a player manage to make their way to this location.

The next content supplied by Allsop and Myatt is called Adlivun: The Snowglobe which is a setting for Wraith: The Oblivion.  The setting is situated around Greenland and parts of Canada and the frozen north.  It covers the Shadowlands region in that particular area, a wintery wasteland where newborn wraiths are as likely to become frozen in soul ice as they are to become functioning wraiths.  The setting information has 2 Arcanoi, Whalesong and Deposit, that are tied to the area as well as information for the various creatures a wraith might encounter wandering this particular wasteland as well as the social structure that fills the role that Legions/Guilds do in Stygia.  A specific lexicon for the regions is also supplied.

Heath has supplied a vampire bloodline in his piece, Chernobog’s Brood.  Chernobog’s Brood are a bloodline of the Tzimisce Vampire Clan that dwell in the Umbra and may only enter the physical world on Solstice nights.  Background on how the brood exists, how it interacts with other Tzimisce and one NPC are provided in this short piece.

The team of Metzger and Leonard add a short fiction, A Little Christmas Fear, providing a World of Darkness telling of Krampus.  They also provide the section Christmas Fears which is basically an instruction manual on how you would run this piece of short fiction as a game.  It specifically has hooks for Vampire, Werewolf and Hunter though I can imagine ways for Changeling or Mage to be introduced as well.

There is a fair amount of interesting stuff in this relatively short (50 pagesish) publication.  And if one thing doesn’t catch your fancy, perhaps something else will.

The short fictions may not interest someone who doesn’t play that particular game line, but they do actually help the actual game play stuff that was bolted on to them.  I think this was particularly the case in A Little Christmas Fear.

Probably my favourite part of this publication was A Little Christmas Fear and Christmas Fears section.  The first supplied a graphic narrative of a specific process that is quite useful for a Storyteller to see and understand.  The second is a straightforward one shot.

In the case of the Krampus stuff and the Chernobog stuff, there are callbacks to previous publications by the authors.    For instance, Cambridge Security by Leonard and Metzger make an appearance in A Little Christmas Fear.  Stuff like that is handy placing things in their proper context.

Each piece is well written and laid out.

The stuff you need to make your own mind up about

I suspect there are many folk out there who like World of Darkness stuff but who don’t know much about more than 1 or 2 game lines.  If that applies to you, some of this book can be quite challenging to read.

The wraith section, Adlivun: The Snowglobe would have benefitted from having their lexicon nearer the start.  I was a bit confused.  Perhaps someone who is an avid Wraith Player would be less confused.

I felt the description of Alfheim in the campaign setting information would have benefited from a map.  The location descriptions felt a bit disconnected.

I found Chernobog’s Brood a tiny bit confusing on my first read through and had to read a second time.  That was a bit clearer, however there are references in it to meta plot events, which if you haven’t read for a while (or don’t know) that might add to the confusion.

Would/Could I use this?  Not all of it, no.  Mage baffles me, so I probably couldn’t use that section.  The wraith section is very specific, so incorporating it might take a bit of effort on the part of a Storyteller.  Definitely not impossible.  I could definitely use Chernobog’s Brood as seasonal antagonists, though perhaps they would fit better as a long term villain in a Werewolf game.  The oneshot, I could definitely use, and I think it would be fun.

I think it boils down to what World of Darkness games you play, whether you’d find it useful or not.  It certainly is a decent enough product, it just might not have enough for any one specific storyteller is all.

The Longest Night is available for sale on the Storytellers Vault

2 thoughts on “The Longest Night: A Storytellers Vault Review”