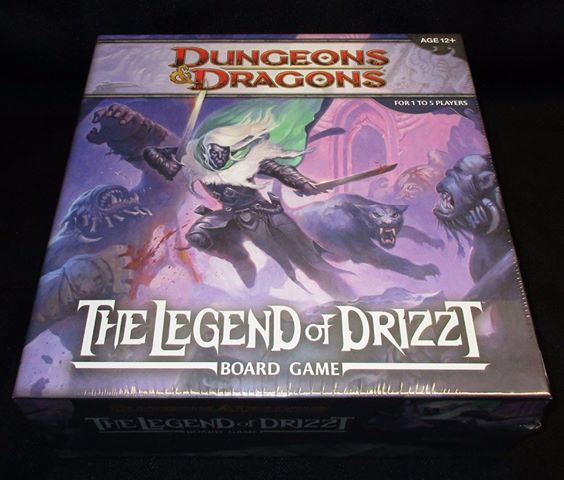 Hello everyone, welcome.  Today I am going to share a recent games night experience, where I was able to play “Legend of Drizzt”, a Dungeons & Dragons boardgame featuring one of their signature characters, Drow Ranger Drizzt Do’Urden.

For a little bit of context, Drizzt is a fairly famous character in the Dungeons & Dragons game, Forgotten Realms setting showing up in various of his own novels, the Baldur’s Gate Video Game franchise and, I daresay, adventure modules.  Don’t quote me on the adventure modules, I haven’t read many but I can’t imagine he doesn’t show up at some point in one edition or other.

Legend of Drizzt is a cooperative adventure scenario game using a modular tile dungeon system where 1 to 5 players can venture into the Underdark to complete some objective.  Our scenario was to find Battlehammer Hall, the throne room of a Dwarven Royal Family, the heir to which is a member of Drizzt’s party.  For long term fans, I know you’ll be screaming his name at the screen right now.  I must confess, I have only read 3 Drizzt books, his origin story from his life in the Underdark up to the point he trained to be a Ranger.  I don’t know all the names, basically.

So we started on a single tile and then we had to move about, exploring setting new tiles when we reached the edge of one.  As you can see, we quickly found a water elemental…

Every turn we would either explore or do something on a pre existing tile (for instance fight a monster that was already out).  The way the game worked, each character had 2 actions.  Basically move and attack.  However each character also had special powers, some that could be used at will, some that were one use then flip.

I randomly picked Drizzt as my character, which was pretty cool.  So, unlike most I had an ability that allowed me to attack twice (Drizzt has 2 magical Scimitars that each had a cool ability) and I could also do small moves before or after each attack.  From a narrative point of view, I saw this as a sort of lunge in, slash and dart out technique that a lightly armoured ranger would likely favour.  This was to prove handy later.  When  it was a players turn, if they decided to explore a new tile, their turn ended and a tile came out.  A monster would spawn and an encounter would be drawn from the encounter deck.  Encounters ranged from attacking spider swarms, or nothing happens – that shadow is just a stalagmite.  Or lava.  Lava was in there too.  If a character didn’t explore, for instance they had to move and then fight an existing monster, they would still draw an encounter card.  Fighting monsters had 3 benefits. Death was their weakness.  If they were dead they couldn’t hit you.  (We got hit a lot…).  Second, if you killed one you got treasure (Yay! Loot).  This could be a healing potion or a reroll or something else.  And thirdly, each defeated monster contributed to the XP pile.  If there was 5 or more XP in the xp pile, and you rolled a 20 on an attack roll, you leveled up to level 2.  I guess in other adventures you might go further?  Perhaps not as the level 2 was on the reverse of the player board.

I didn’t get too badly hurt in this game, though I also didn’t get into too many fights.  I went in the opposite direction from the party to explore, as fast exploring is better and we learned early on that if you are clustered together, events could target all of you.  My first encounter was a goblin archer that I shrouded in Darkness, disabling it.  (Drow racial ability).  Then I utterly destroyed it with my whirling blades of death.  The game then punked me by spawning a Drow Wizard at my location.

But I did my standard dart in slice and dice and dart out, which actually killed it as I managed to activate my scimitar (I think it was called Icing Death?) special ability and do more damage.  One dead drow mage.  I then rejoined the party as they were on the verge of finding the throne room, which spawned the boss.  A human assassin, Artemis Enteri, who apparently is an arch-foe of Drizzt.

The details of our villains’s attacks were read out.  I think we were allowed that information.  So we knew he had as many hp as any of us, and he could heal himself using his vampiric dagger attack.  But only if he started his turn adjacent to us.  I suggested my prancing style would be best suited to tanking him, and since no one was eager to fall on his sword they let me.  I used one of Drizzt’s abilities to charge in and attack, and then continued attacking and jumped out of the way, reducing his hitpoints by over 50% in one turn.  The Dwarven character, I want to say Bruenor?, charged in and finished him off.  And then Bruenor’s adoptive daughter snatched the Battlehammer crown from the throne room, and we fled for the exit.  Quest accomplished.

This game was a lot of fun.  It was very much Dungeons & Dragons lite, with no requirement for a dungeon master.  The components were pretty good too, and there were quite a lot of them so there is value in owning this game if you enjoy Dungeons & Dragons, but don’t have a dungeon master.  Or you are a DM and are looking for some miniatures for an Underdark campaign.  There are Drow, Goblins, Trolls and even a Drider.  And I’m not even counting the big bad monster whose name I don’t know…

Excellent game, and I hope I get to play it…and the other similar boardgames in the future.  Bye for now

1 thought on “Games Night – The Legend of Drizzt”