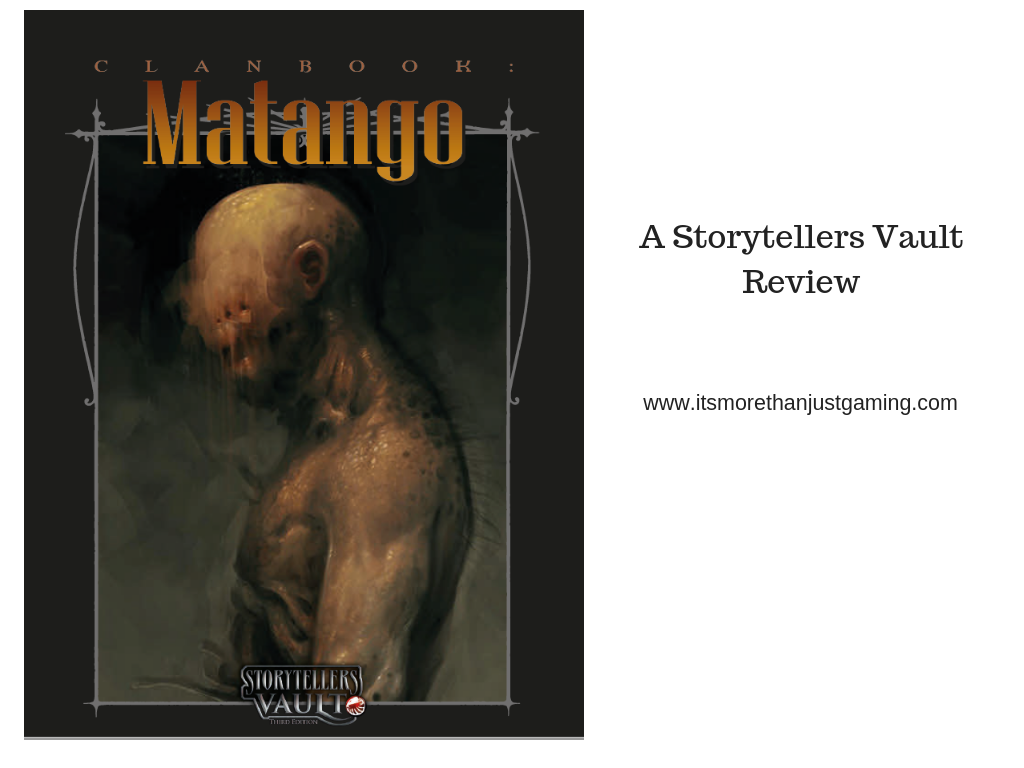 Hello everyone, welcome.  Today’s post is a review of the Storytellers Vault (community content for Vampire: The Masquerade) product, Clanbook Matango.

Vampire: The Masquerade  has loads of official sourcebooks and a legion of community content created via the vault, and for my money, one of the more interesting Source Book types is the Clanbook.  That is, for the uninitiated, a sourcebook detailing history of a bloodline including theories on its origins as well as the archetypes associated with it and some cool clan specific powers.  Clanbook Matango is one such book.

The Matango Clan of vampires, well not to put to fine  point on it, are walking fungus colonies.  That’s not exactly it, but near enough.  To be more precise, when a human becomes Matango they begin developing mold, mushrooms and fungus all over their body transforming them (over time) into some of the most bizarre looking creatures in Vampire.  It is hardly surprising that such a transformation leads to these creatures seeking out secure hiding places, often underground.

Clanbook Matango  gives a brief potted history of the bloodline, going back 150 years describing the various different archetypes of the bloodline from the savage Toadstools to the rural Truffles.  Yep, two of the subgroups within the bloodline are called Toadstools and Truffles.  The clanbook also gives details of the particular niche that the Matango occupy within the society of vampires.  Most commonly researchers and scholars, aided by the new Alias Background,  or spymasters aided by their unique discipline, Mycoidae.

Rounding out the book there are some starter character templates supplied as well as short biographies of notable members of the clan.

This book is well written and professionally laid out.  I found it really easy to read and I think I only spotted a handful of spelling errors in 70 pages, and for me I consider that pretty good.

The Matango abilities, their clan discipline Mycoidae, the clan merits and flaws, and the background Alias are really cool and Alias is a background any clan could use.

The clan history is limited to the last 150 years, and whilst the narrator shares a number of theories about what the actual truth is it is never confirmed.  Normally this irritates me a bit as sometimes it just feels like lazy writing put across as Storyteller Agency, HOWEVER it seems to work here as there is a narrative justification that makes sense for why the clan history stops when it does.  That still leaves Storytellers to back fill clan ancient history and in this case it feels like it was by design rather than not wanting to commit.

I genuinely don’t have an awful lot to say in this section.  There was one element of the Matango lore that I was on the fence about, and that is their relationship with the nosferatu clan.  That is, the other clan of hideous monsters who are spymasters and scholars.  In some respects, Clanbook Matango felt more like a bloodline of the Nosferatu.  The hiding in sewers, filling roles as spymasters and researchers though where Nosferatu tend to be spymasters first and loremasters second, the Matango are the opposite.  Part of me liked this as the Nosferatu are by far my favourite clan, however I recognise a personal bias there.  Still, there are narrative distinctions made between the two clans.  I also wondered about relations between the clans, described in the book as good.  I just wondered if perhaps they shouldn’t be rivals (or enemies) given that they offer similar services each with their own advantages, and they tend to occupy the same sorts of spaces which makes me think of Turf Wars.  In the Vampire: The Dark Ages  setting, the Nosferatu and Cappadocian clans often clashed over territory as they both favoured hidden underground spots.

Another thing that I am conflicted about is the fact that the Matango, as represented in the book, appear ubiquitous.  In one instance I like the idea of them being like a hard to eradicate fungus, but on the other hand unless you are planning a major reshuffle of the world lore, they felt too common.

Acid test, would I use this book?  Yes.  I can see the value in adding a rare bloodline to the mix in a game to give players something to scratch their heads over, and I can even see the fun in running a game exploring why nobody seems to be able to find a Matango more than 150 years old.  That would be quite interesting to run.  And of course, there is also the potential turf war plot I alluded to earlier.

My considered opinion, this supplement can be used in just about any Vampire: The Masquerade game.

Click on the following link to purchase Clanbook Matango