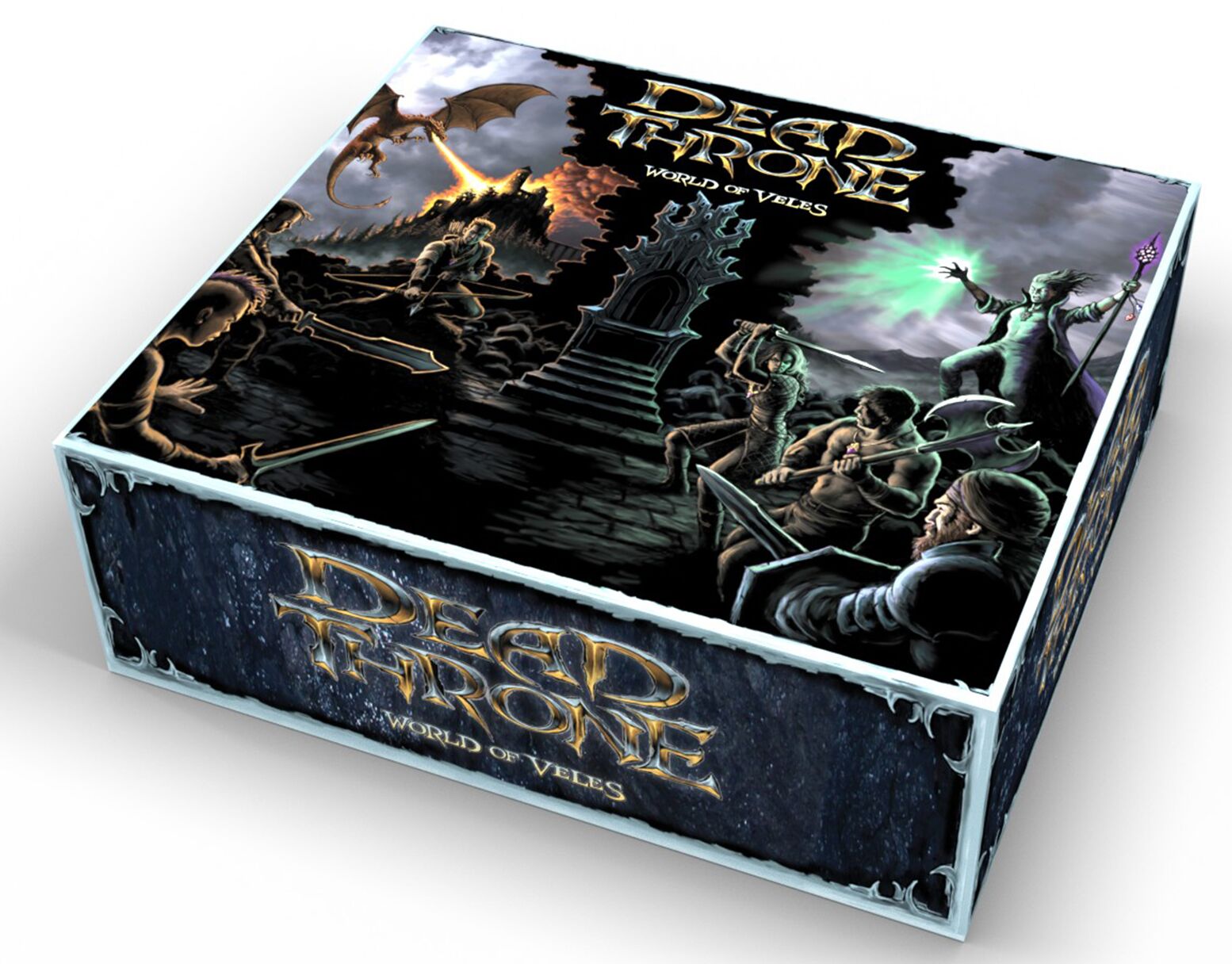 Hello everyone, welcome.  Today I have the distinct pleasure writing a post for some friends of mine who have returned to Kickstarter to release a new version of their successful boardgame, Dead Throne.  This time it is called the Dead Throne Core Box.  Click on the hyperlink to read about the original campaign.  Sharkee Games have had a long road getting to this point, and it is pleasing for me to see they are still going strong so soon after delivering on their first successful campaign.

Disclaimer, Sharkee Games have not paid me for this post, I am supporting this because I like their product.  Last time round I only got to look at it however, since then I have had a chance to play it.  Images in this post used with permission of Sharkee Games.

I don’t know about you, but that looks pretty awesome to me.

We are returning to Veles once again and players will be competing or cooperating to protect the lands and stake their claim on the Dead Throne.

So, what does this new  Dead Throne Core Box campaign have that the first one didn’t?

Ok, so this edition is going to be cheaper, and more compact (one goes with other) so folks that weren’t able to support the first time round might find it easier to this time.

Of course that doesn’t mean you are getting less stuff.  As you can see, the core box is jam packed with goodies.

Why don’t we get a closer look at some of the key bits and pieces.

That’s quite busy, I would say.  A game to get your teeth into with a fair bit going on which will appeal to folks that like in depth games and/or fantasy feel.  And speaking of fantasy feel, this is reinforced by lots of cool artwork.

Now, I mentioned this campaign the game is going to be cheaper.

Campaign regular pledge is £50, though there are early bird and super early bird pledges of £45 and £40 respectively if you support early enough.  The campaign is also promising free shipping to certain destinations, as well as being customs friendly.  Being a UK resident, this is something I am quite concerned about for future Kickstarters that I have backed as I got hit with a customs bill a couple of months back when I bought something from stateside (Not a kickstarter as they generally come via the EU which at time of writing is a good deal for me…) .  I asked if Brexit would affect this in the event of a No Deal.   I am reliably informed Brexit shouldn’t affect anyone already listed as customs friendly outside the UK or the EU, and Sharkee Games have already taken steps for EU and UK clients to keep this promise by arranging for shipping to within the EU for EU and to within UK for UK.

The Game itself has been re-balanced somewhat as a result of player feedback received given various play tests and demos at Cons, as well as folks who have backed the prior campaign.  I have to respect a content creator that listens to feedback, though isn’t paralysed by it.

And I think my final comments have to be on the optional extras available in this campaign.  Foremost among them, the Miniatures.

Not included with the core box as is so often the case these days giving folks an opportunity to buy the game without miniatures at a lower price, or pay a bit extra and get the miniatures included with your pledge.  Now, I know there are some folks who think this is gouging behaviour.  I’ve backed two campaigns recently where miniatures were optional.  When I added the cost of the miniatures as an extra, the price of game and minis came to what I would have expected the game price to be.  I liked that there was the option to buy without for those folks who are more interested in gameplay than miniatures.  An added benefit is that it allows folks who backed the deluxe campaign to supplement their gameplay with the miniatures.  And for £15, seven miniatures for the game can be yours.

And finally, there are several language edition upgrades which include all of the cards included in the core box translated into the chosen language hopefully using actual translators and not google translate…I’ve seen more than one KS use almighty google with comical results(Full disclosure, I spoke to them and they used translators…phew!).  In the name of giving balanced view, I’d probably want the language edition to be part of the cost but given Sharkee Games have cut the cost down as much as they have, I think the additional production cost of this upgrade (£12) is fair.

So that’s it for me just now.

Dead Throne is back on Kickstarter, I’ve just made my pledge (backer number 63 – would have been lower, but I needed breakfast etc) and if this sounds like your sort of thing you can do so HERE.  Now, what was that I said about a long road?