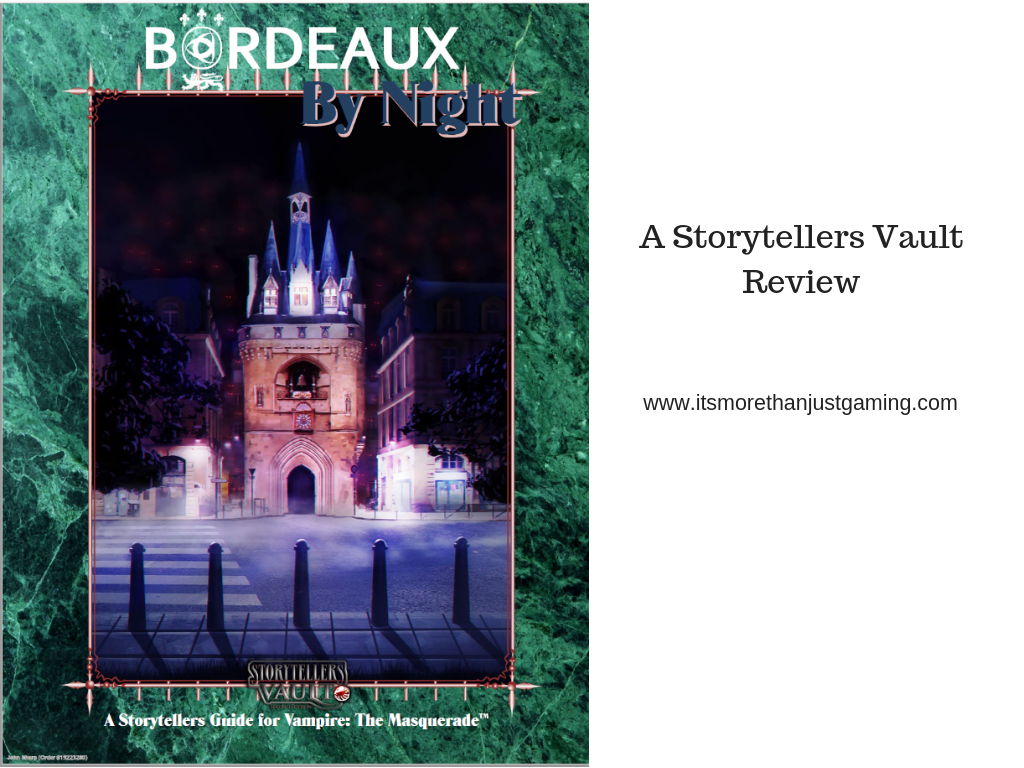 Hello everyone, welcome!  I hope you all had a good summer. Today I doing one of my Storytellers Vault reviews.  This time, for Bordeaux by Night – The Storyteller’s Guide

The Bordeaux by Night – Storyteller’s Guide (from here on in referred to as the St Guide) is a city source book for Vampire: The Masquerade  and is the companion book to the Bordeaux by Night – Player’s Guide that you can read my review about by clicking the hyperlink.  Where the player’s guide gave generic regional information and what is publicly known by and about the characters in the region, the St Guide gives the reader a long hard look behind the wine scented veil of the Masquerade.  In fact the red stuff dripping from the walls behind that veil is not wine at all so much as it is the blood of the many victims created by those characters introduced in the player’s guide that are nowhere near as friendly as they might appear.

That is not to say that every supernatural in the region is a blood crazed monster filling the streets with blood…not exactly.  The Storyteller’s Guide gives the reader a long hard look at the various horrific behaviours and habits of those blood crazed monsters that make up the cast of Vampire: The Masquerade in this particular region.  Without spoiling anything, I made a comment in my review of the Player’s Guide about Kindred (Vampire)secrets up to and including genocide.  I wasn’t far off the mark.  Institutional bigotry, warcrimes and some stuff that is just downright nasty and creepy are the flavours of the NPCs that are listed in this volume.  Yes, some of them might be making an effort at humanity, but they can only fight their natures for so long.

The Storyteller’s Guide is a resource listing secret histories, rivalries, alliances and betrayals.  It contains a timeline of the City of Bordeaux showing critical events, and who was in charge.  There is also a detailed (though not exhaustive) section listing how the key players act towards others in the city, and how they really feel.  This is something I have come to expect from Secrets of the Masquerade products as multi-layered understanding and misinformation is a significant motif in their game ethos.  Speaking of previous products from Secrets of the Masquerade, there are a number of ideas covered in previous works in a neutral tone that are put into practice in a full blown setting which was a beneficial context for folks that have read those works.

A word of warning (or two).  This is not a book for players.  If you are a player who might be in a campaign going to this region, don’t read this.  Secondly, this book is quite heavy duty.  There are some disturbing things in the setting, and on top of that there is a lot of information to take in, so not for the faint of heart.

There is a lot of detail about all the NPCs in this book.  How they view others/are viewed by others will help a storyteller run the game.

The stats for the NPCs are not in the book, they are in a separate downloadable ZIP file which makes them easier to access during a game.  (In other, official, city books the stats of npcs are embedded in text of background which isn’t always easy to flip to if running multiple characters)

Something I noted as an issue in the Player’s Guide, some of the character misconceptions were quite confusing, for instance how some vampires of some bloodlines see themselves as from others.  The description wasn’t always clear in either volume, however there was a read me file in with the character sheets that clarified things a lot.

The characters themselves are interesting, and even if you don’t plan to run a Bordeaux chronicle, they could be used or at least some of the ideas used as there are plenty of them.

The English is sometimes ambiguous.  Not so much that it massively detracts from the content, but there are the odd times where it is hard to puzzle out what was meant.  I tend to overlook this for the most part as the book was written by someone whose first language is not English in their spare time, however it is something that does crop up.  (As noted above there are some clarifications in the read me for some of these)

It is my opinion that you can’t read this without the Player’s guide as there are too many events that are glossed over in the St Guide.

Related to my previous point, there is a lot of information to take in.  A lot.  And some of it exists in The Player’s Guide.  I think I would find this content easier to digest if it was a single volume.  Again, I add the caveat that I am minded to overlook this as despite this you get 206 pages of content written to a high standard of detail by someone in their spare time.

I think we come to my acid test.  Would I buy/use?  I think my difficulty here comes from the fact that I don’t tend to use established settings, or sourcebooks in their entirety (for me as a Storyteller, a big part of the fun is crafting the world) rather than anything to do with the product itself.  It is definitely fit for purpose which is the one thing above all others that I look for when reviewing, though with the caveat you really need The Playerr’s Guide too.  I could certainly use stuff from the book, if I could find a reason to have player characters show up in Bordeaux, but I personally wouldn’t run a chronicle there.  Again, that is more to do with how I run games and nothing to do with the book itself.  I can definitely recommend to anyone who is running a game based in France, or other parts of Europe as there are definite plots that would draw characters from the UK, Germany, and other countries.  Not necessarily a must by for all chronicles, but definitely a book of quality worth your time.