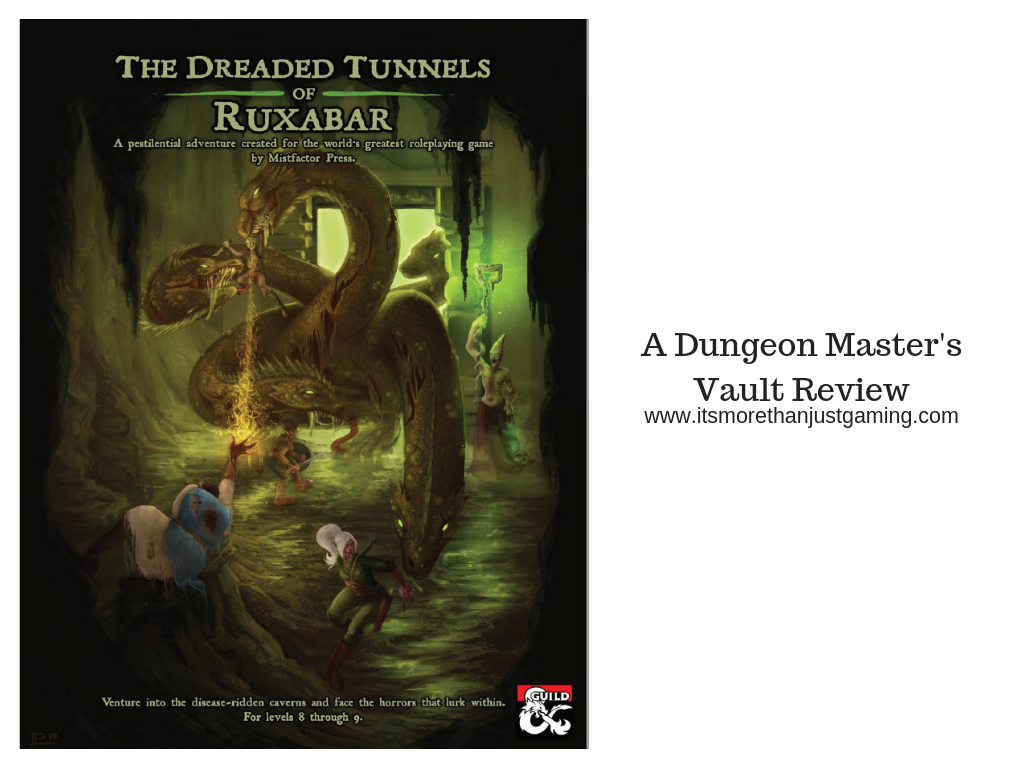 Hello everyone, welcome.  In a small departure from my usual routine (but not an unwelcome one, and something I hope to repeat in the future), this week I am reviewing a product from the Dungeon Master’s Guild rather than the Storyteller’s Vault.  Frequent readers will be familiar with the Storyteller’s Vault in that it is a community content portal for World of Darkness game lines and as Vampire: The Masquerade and Vampire: The Dark Ages are 2 of my favourite RPGs it should come as no surprise that I review community content for those line.  Recently I have been playing more Dungeons and Dragons 5th Edition and getting back into it.  I always liked it, but it hasn’t been a huge thing until recently – I do play in a regular game, but never ran it before and didn’t really read much lore.  In the last month or so I have been reading more of the lore and preparing my own campaign setting (more on that in the future I think) and so it was only natural that I start looking at DnD community content.  And so, to The Dreaded Tunnels of Ruxabar.

Disclaimers.  Whilst I was not provided a free copy for review purposes, I was encouraged to take a copy for free from the DM Guild when it was set as Pay what you like..  This Product is available from the Dungeon Master’s Guild, a website that I have affiliate status with.  This means that any links to this product or the Dungeon Master’s Guild (or other related products on associated sites such as Drive Thru RPG) are tagged, and if you click them and buy anything, I make a small commission.  In order to give you choice, I will also include a “clean” link free of tags at the end of this article if, for any reason, you want to support the product but not necessarily this site.

The Dreaded Tunnels of Ruxabar is an off the shelf adventure module for characters of around 8th level.  Players are drawn to investigate a plague near the town of Stagwood, which will lead them into a lair/dungeon/fortress/place/thing of enemies and traps where they will run a particularly nasty gauntlet of obstacles and ordeals until they eventually reach the story’s conclusion.  There they can choose what to do with the villain, and the information they have learned along the way.  In case you are wondering, I am being purposefully vague to avoid spoilers.  Though perhaps I can add a bit more detail.

The players will run a disease infested gauntlet of traps and monsters that will not only test their might and skill, but also their general fortitude.  As you might expect from a Dungeons and Dragons adventure there are thematic monsters, traps and even some magical items for the players to find along the way.

The book is well presented and organised.  Aside from a few minor bits where the wording is a little bit clumsy, it looks professional.

The flow of the book is logical.  There is a section of story about what has happened before at the start, suggested ways to hook the players and then the adventure itself.

The Adventure itself mostly feels like it could be run straight off the shelf.  A Dungeon Master would benefit from reading the whole thing first but the book is laid out well enough that you could probably get away with running the thing cold.  Though thinking on it, you probably want to know the big picture to keep it in mind whilst running.  Probably best to do a read through first, but it isn’t especially long.

There is a player map supplied as well as a DM Map, with notations corresponding to rooms and encounters in the main book.  And each room/encounter has some flavour text and a DM description for ease of play.

The adventure comes with a random encounter table and some unique adversaries to fight, that mostly have character sheets/stat blocks at the back.

The adventure doesn’t reference the world at large, so could easily be dropped into any setting you like.  If you have different gods, then change the names and you are more or less good to go.

There is a sequel in the works.

Not all the creatures in the encounters have character sheets in the book.  Some are reskins.  I have no issue with this as I do it frequently, however I noted reskins from Volo’s Guide, Storm King’s Thunder and I think the Monster Manual.  I suspect most DMs are going to have access to the Monster Manual and possibly Volo’s Guide (I know I do), but not everyone has all of the adventure modules, such as Storm King’s Thunder (I don’t).

I actually had to scratch my head a bit when I saw the acronym SKT and a page number denoting a stat block.  I am very familiar with PHB, MM and DMG but it took a little while to figure out that SKT was Storm King’s Thunder.  A bibliography of recommended support material would be helpful.

My acid test is, could I use this?  Would I use it?  Certainly I could.  The module is pick up and play, so there is definitely no issue there.  Would I play it?  I probably would.  I think it would make an interesting and diverting side quest, and I can certainly see ways of expanding the back story somewhat to fold it into a grander campaign so that it was more than just a side quest.  And as a DM, it isn’t a bad thing to have an of the shelf adventure that is reasonably short that I don’t have to prepare much for so that helps me.  And building on that, there are so many cool looking adventure modules out there that are quite vast but I am just a bit intimidated to try and get my head round, starting small like this will help me towards being able to do that.

Do I recommend The Dreaded Tunnels of Ruxabar?  Yes, I do.

All links beyond this point are tag free

If you have community content on DM Guild or Storytellers’ Vault, then you should check out my review service and policy HERE