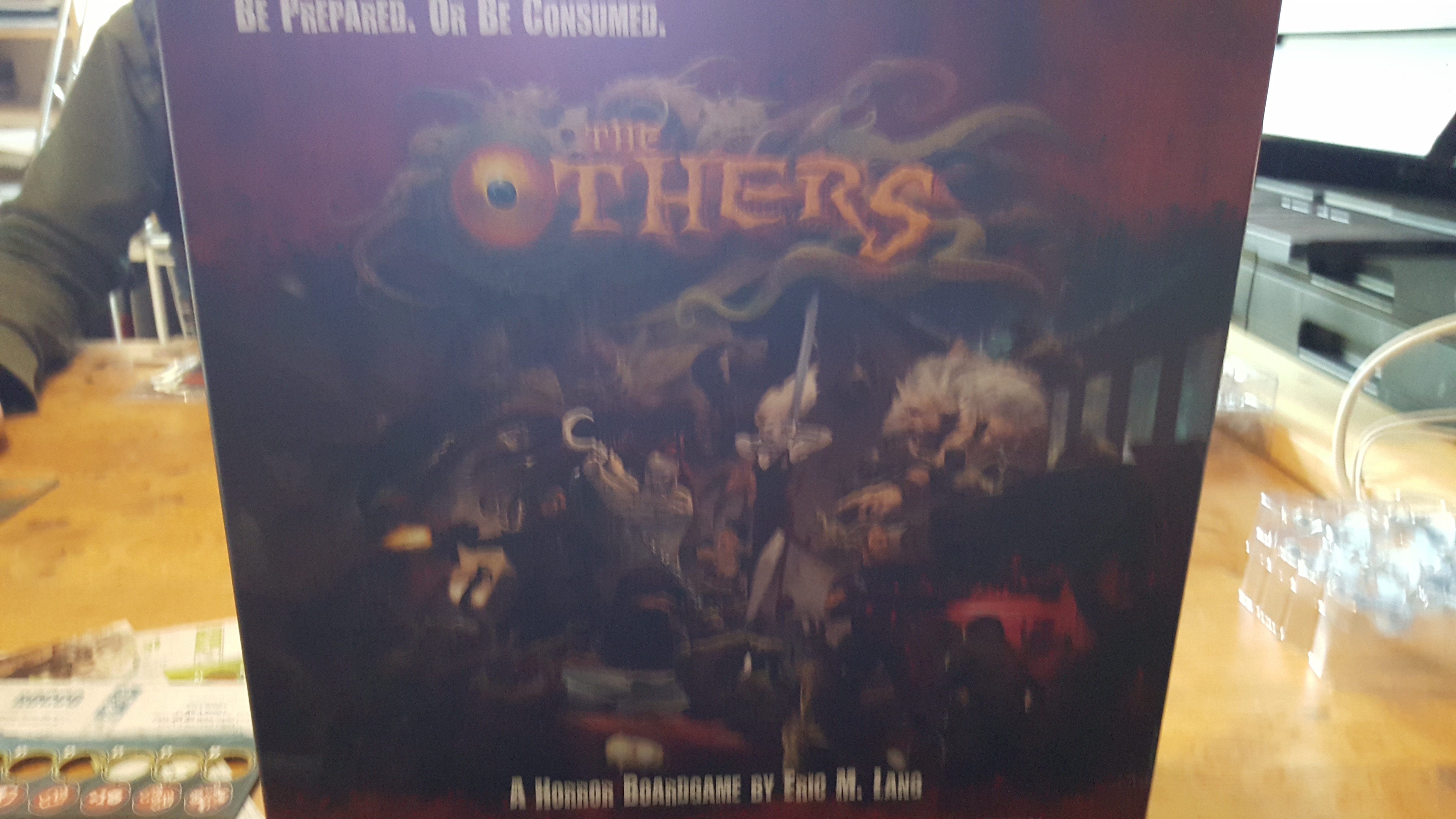 Hello everyone, welcome.  I recently visited my friend Barry, and as so often happens when I do that we played an assortment of games.  Most of which I have played before and written about here but on this occasion we played “The Others” which is a game I was neither familiar with nor had I played.

The concept is fairly standard.  The apocalypse is happening, with the Seven Deadly Sins leading the charge against humanity corrupting acolytes along the way.  The only thing standing in their way (at least in the core box) is Alpha Team of the F.A.I.T.H organisation.  The game is asymmetric, meaning that one player controls the villains and the rest control the heroes.

Your heroes are not your clean cut boyscouts.  They are grizzled, probably cynical and, in several cases, supernatural.  They start with basic gear and leave their starting area with an objective in mind, trying to achieve that whilst gearing up along the way.  Each character gets 2 turns to do stuff per round, whereas the Sin player gets a number of reaction tokens equal to the number of players meaning they activate half as much but can choose when they do so.

Combat is pretty basic, but can ramp up to brutal pretty fast as enemies swarm heroes and even a fully geared hero has trouble dealing with hordes.  However, there is a mechanic that I really liked in the game and that is the corruption mechanic.  Heroes can take wounds, and they can take corruption.  If they reach maximum corruption, they start taking extra wounds and once they have taken 5 wounds they die.  Here is the thing.  Corruption can be involuntary (inflicted by an enemy) or voluntary (taken by choice).  Players can choose to inflict corruption on their characters and when the do so they gain access to extra buffs.  And the higher their current corruption, the longer the list of buffs.  This really made sense for the Vampire and the Werewolf on the team, even the Telepath but it made less sense for the snipers.  However it was fun as it added a risk/reward element to the game as voluntarily taking corruption increased your amount but allowed you the new level’s buff and every previous level’s buff for your next action.  However, and this is where the price comes in.  The buffs only last for that action.  If you want them again, you need to take corruption again.

Players move around the city of Haven trying to achieve objectives, overcoming enemies and canceling the apocalypse.

Of course, the villain has a lot of tools at their disposal.  The game has 7 scenarios in it, and each one has two potential maps to play (Player’s choice).  On the reverse of the map card is the red scenario card which outlines the various branching objectives the players must achieve.  So, we played the Haven’s Last Stand scenario which required me to gear up my characters and then either destroy abominations or clear pentagram tokens from the board before the SIn player’s avatar shows up.  The scenario card gave detailed instruction of the objectives whilst also outlining what the villain player had to do at any given time.  The villain’s apocalypse track, which advanced every turn, also made things successively harder as the game progressed.

Ultimately I lost.  I made a mistake in  the first turn and I never recovered from it.  I split my heroes and tried to achieve multiple objectives which resulted in one hero surging ahead and getting loads of gear, whilst two other heroes became bogged down fighting in difficult situations.  Morgana, the vampire, did really well blazing a bloodstained trail of acolytes and abominations but eventually even she was overwhelmed and her backup was too far away to make a difference and we were overrun.

This game was brutal and it was great fun.  As I noted there are 7 scenarios each with 2 different maps to try.  Replayability is increased by the fact that the game ships with 2 of the Sins, Sloth and Pride, and you can play any scenario with either.  Other sins can be purchased separately and other teams of heroes are also available, and these teams seem to have their own scenarios too.  So there are lots of combinations that can be applied to any given scenario meaning you shouldn’t be bored any time soon.  Also, the game has 3(4?) types of game mode.  Terror, Horror, Corruption and final battle.  There are 2 scenarios for each type except the final battle which has one.  Each scenario type has a different feel, though I didn’t experience them all.  We played a terror game which was basically a skirmish.  There is at least one game that adds a “Dark Past” mechanic to the heroes, revealing a bit of their story.  We had a look at some of the dark past cards. Harsh.  Brutal.  Cruel.  Loving it.  Looking forward to playing again.  Still a bit unclear why it is called “The Others”.

1 thought on “We played (and I lost) The Others”