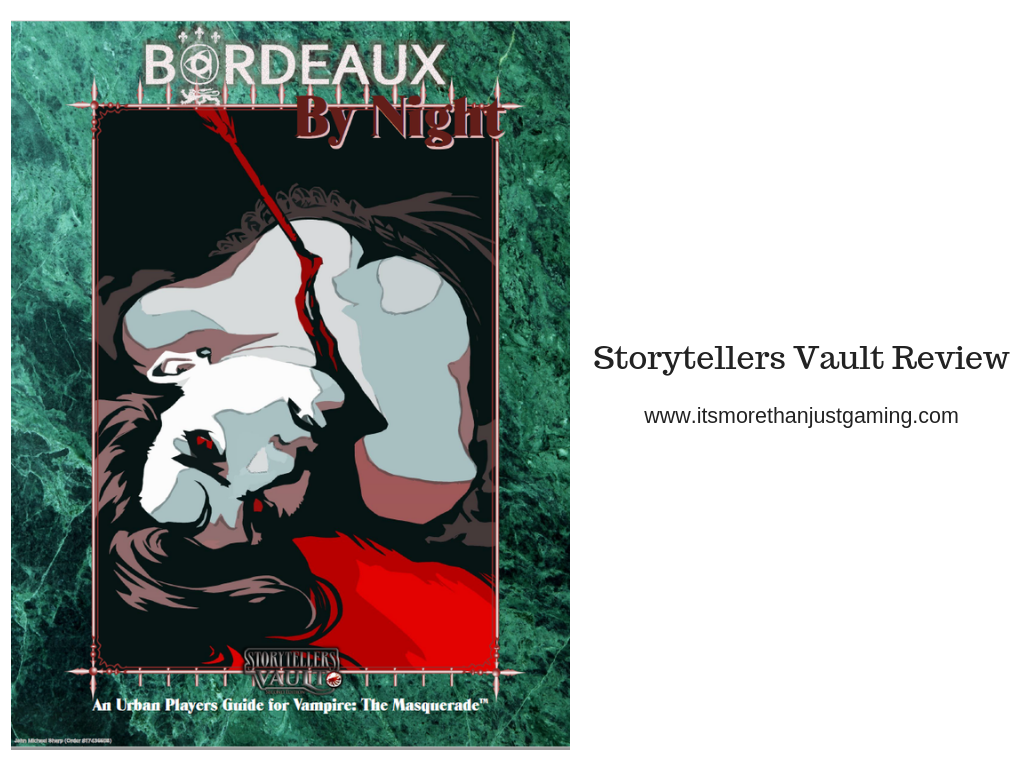 Hello everyone, welcome.  Today I am going to be doing a review for the Storytellers Vault product, Bordeaux by Night, by Secrets of the Masquerade.

Bordeaux by Night is a region setting book for the game, Vampire: the Masquerade detailing the Bordeaux region of France, in the same way that Of Blood and Bays was a regional sourcebook for the Chesapeake area of the US East Coast, which I wrote about a few weeks back (see the link).   Which is to say, a regional sourcebook is written with the intent of giving players and storytellers flavour for a region, indeed, details of a region in order to run a game in that locale without necessarily having to run to the library or google in order to research in the name of authenticity.

What you get in this book is a fairly detailed potted history of the region dating back to the times of the Angevin Empire (When the King of England was also a Duke of about half of France, among other things…) and before, setting the historical context with information.  The historic information is set out, with sidebars on each page relating to Kindred (vampire) activity at the time in question spanning a fair chunk of the timeline, at least covering some of the major events.  There is also a really detailed section on the Geography of the region, down to the local districts detailing their whereabouts and overall feel.  This is accompanied by a fair amount of information on French Law and Civics to help with players and Storytellers in running their games.

And, of course, there is a concise list of all the Kindred resident within the city giving a brief overview about what is publicly known about them, their appearance and what their agenda is known/assumed to be.  There are also Coterie charts of the various factions within the city, which outline the feelings coterie members have towards each other.  For the uninitiated, in the game Vampire: The Masquerade young vampires tend to band together in groups known as coteries, which sometimes survive even as they age and these groups form bonds as strong (or stronger) than family or clan ties.  Sometimes a group of kindred will form a coterie later on in their unlives for a specific purpose and this coterie may persist beyond the purpose or it may collapse.  For all intents and purposes, the coterie is the Vampire: The Masquerade equivalent of the DnD adventuring party.

Finally there are links to further reading sources for those who wish to follow up with their own research.

As I said above, there is a lot of detail about the region collected in this 111 page work.   In fact, for me, the most useful element of this book was the history and geography of the region.  There is enough there to run a game with authenticity.

The use of Sidebars to add Kindred details to historic periods was an effective tool in building the context of both mortal and supernatural population.  Though, I would expect nothing less after reading Secrets of the Masquerade’s other title Guide to Storytelling. (Secrets of the Masquerade has many titles on the Storytellers Vault, many of which I have reviewed on this site)

There is a large number of Non Player Characters listed that effectively form the court of Bordeaux, and the details of what is publicly known in terms of politics and backstabbing is quite in depth.

There are some entertaining French stereotype jokes.  (Which is allowed as the author is French)

The Stuff you Need to Make Your Own Mind up About

The English is not perfect.  Normally I don’t tend to focus on grammar as it can come across as pedantic on my part, however I mention it here as there were a couple of bits where the meaning was ambiguous (to do with NPC characters and their bloodlines).  I have fed this back and we may see some changes in the next round of edits.  The rest, whilst sometimes appearing clumsy/clunky, is understandable and I am inclined to overlook as the author is a non native speaker doing this on their spare time.

This is a player’s handbook.  The history and geography of the region is really interesting, though potentially not complete.  The Non Player Characters are certainly not complete in terms of what their dark secrets and hidden agendas are (Given the Author’s take on the World of Darkness, I assume all of the friendly charming, happy NPCs are guilty of things up to and including warcrimes).  The NPC details in this volume are useful for players to refresh their memories on what is publicly known but if you are the storyteller, you will either need to fill in the blanks yourself or wait for the Storyteller Handbook for Bordeaux.  Which is what I would be inclined to do, as I don’t see the point in using a setting book if you are going to have to spend time adding details.  Aside from anything else, I am curious about what the not publicly known stuff is.

The coterie charts were interesting and did add a bit of depth though they might be better placed in the Storyteller’s Handbook for bordeaux…unless the charts show what is publicly known and future charts show the truth.  (Coterie charts created by MrGone, a prolific St Vault contributor in terms of sheets that help run games more smoothly)

Would I use this?  It is a pretty good product.  If I wanted to run a French Campaign, I could certainly use this to run a session or two where players visit Bordeaux though if I wanted to write a campaign in the region using the NPCs, I think I might want to wait for the Storyteller’s Guide.  Certainly, if you are a player in a Bordeaux region game, using these NPCs, it is a very useful reference to remind you about the NPCs you have met so I suspect others would find more use for this product than I would, as I don’t get to play the game too often.  That being said, once the Storyteller’s Guide comes out, this might be considerably more useful as (hopefully) you’ll be able to look at the public face of a character on one title and look at their grubby reality on another.  That will lead to a good story, I think.