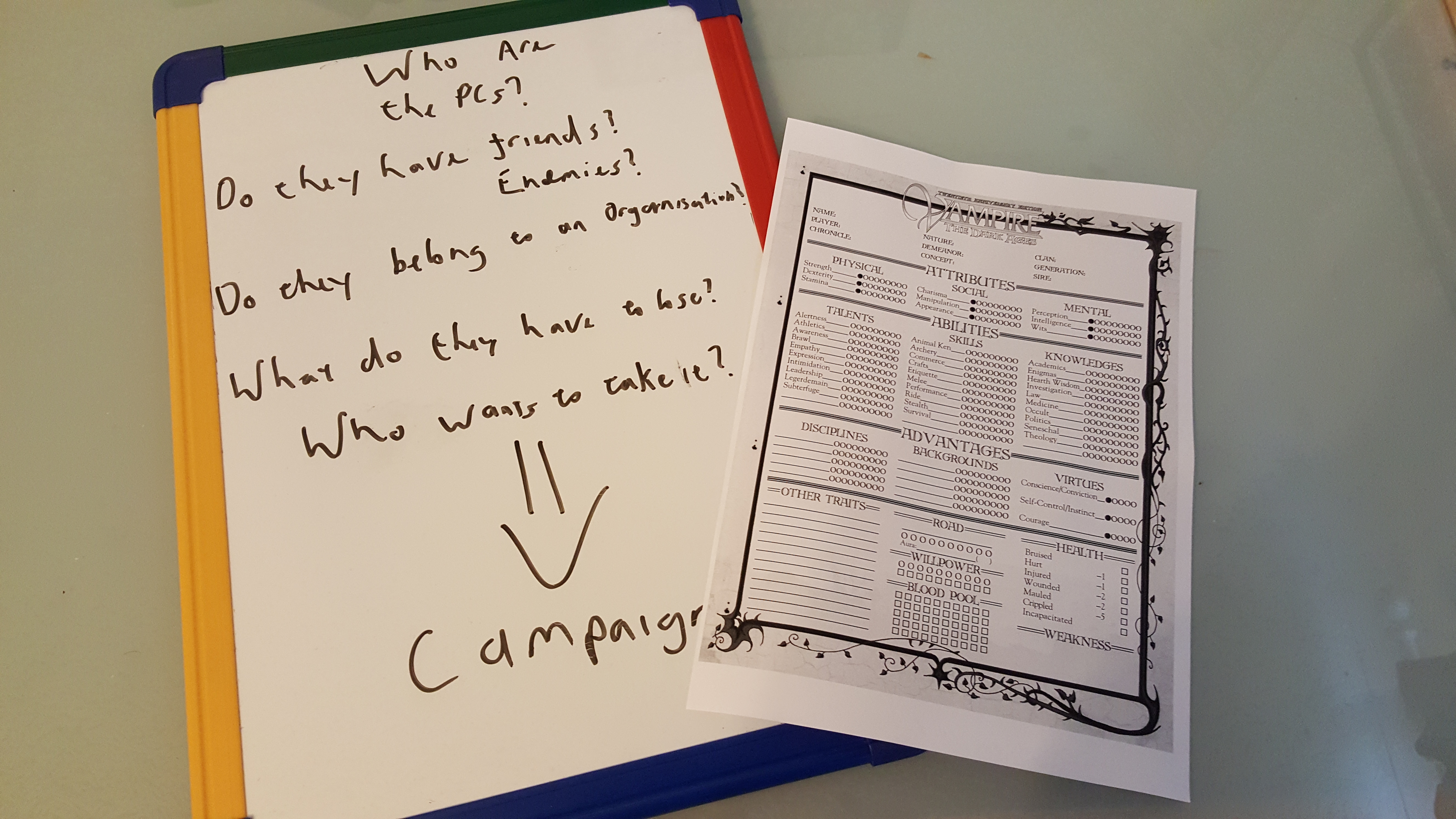 Hello everyone, welcome!  Today I wanted to revisit a subject in rpg that I have covered before, and that is close to my heart when it comes to running a fun game.  And that is player involvement.  I have spoken about this in the past in terms of how it benefits the players in terms of buy in to games, which you can read about HERE, or even use player involvement to ramp up suspense, which you can read about HERE, however now I am going to talk about some of the advantages to the Games Master.

There is one assumption made.  That no campaign is written yet, that you as Games Master have gone to a group of players and invited them to a game.  If you already have a campaign and a plot figured out, what I am going to discuss might be a bit harder for you (though not impossible).  It relates to a third post I wrote a while back where I discussed using characters as plot, which you can read HERE.  In that post I talked about how a game can be run from almost no preparation if you have an NPC with an agenda and an array of other NPCs (and locations) that you can trot on as needed depending on what players do.  This post goes a step beyond that, but along the same path.

Imagine yourself as the Games Master.  You have your favourite game systems, your favourite types of game and you have your favourite books and movies that inspire you.  The end result is that you will create a certain type of game for your players.  In my case, it tends to be darker and more horror than adventure.  However, each of the players have a different set of experiences and preferences.  Some of them may be games masters themselves, though that doesn’t really matter.  What does matter is that they will have their own ideas about what is interesting and fun to play in and they will be entirely different from yours.  This is good, and in fact this is my key point.

So, with these thoughts in mind, you are about to plan your campaign, right?  That does seem to be the norm.  But what if you invite your players to a game and instead of writing a campaign in a vacuum, you have your character creation discussions, leading to a group of characters with rich backgrounds.  But instead of just leaving them to the players to drip feed to the other players in conversation over the course of travelling from adventure to adventure, perhaps you can apply your own skill as a storyteller to those backgrounds and make a campaign.

Frequent readers are aware I run Vampire: The Dark Ages games with my friends quite frequently.  One of my friends read my post about using character creation to increase suspense and asked to join a game because that sounded fun to him (that stroked my ego quite a bit).  So I sat him down with another player and we had a chat about what setting we were going to play in.  We eventually settled on 11th Century Scotland, in the Central Belt (The part of Scotland with Edinburgh and Glasgow).  And then the players did some brainstorming about their characters, and what they produced were an illegitimate son of Lady Macbeth and an exotic bodyguard from a distant land.  Admittedly, I am over simplifying things as they do both read these posts, however the simplified versions will serve my purpose well enough.  My purpose being to say that my players had brought two different ideas, with two rich backstories which I was then able to run with.  Exotic bodyguard from a far away land?  Ok, let us build up on that faraway land, build a society around the bodyguard and suddenly reasons for being in Scotand spring to mind…and enemies that I would not have thought of now exist.  An illegitimate son of a royal family (technically 2 royal lines due to some convoluted ignoring of historic timelines…) led me to thinking what sort of NPCs would want to recruit such an individual, and how they would go about it given that the player had created the story of a wastrel who spent his life in constant fear of murder so wasted their life to appear non threatening.    The player-created stories led to an encounter between one player and a monster from oriental lore that I really hadn’t heard of before, and a game for the other player that was one of the most harrowing games I have ever run.  Both of these games were successes, the harrowing one was probably the best game I have ever run as it was pretty intense for player and GM, and neither game would have been possible without player input first.

So, what does this mean for other Games Masters?  Well, if you simply want to run a game but don’t have a full campaign plotted out then there is a lot of advantage to starting with the player’s back stories and building lore and a world round them, and then seeing what plots naturally grow from them.  It occurred to me long ago, and I have written about it a couple of times, that stories don’t exist in a vacuum.  They are a collaboration between the writer’s talent and the reader’s perspective.  The story happens somewhere in between.  What I am discussing here is just one more way of using this particular thought process by putting the Games Master in the role of writer and the player in the role of reader.  Actually scratch that.  I have made that comparison before, HERE, but actually this feels more like a subversion of that where the players are the writers and the Games Master is the reader.  If the players create their characters first based off a very basic premise (IE two characters in 11th Century Scotland Central Belt with a reason to work together), then the Games Master becomes the reader as the GM didn’t create that framework.  The players did.  The reader brings their perspective to a written plot/narrative and story grows from that.  In this case, the reader/GM reads the framework the players have given them and applies their own perspective – their own experience as a gm – and then creates a story from it.  And the roles reverse, which is amazing when you think about it as what you get is a story that was started by a handful of creators, where the ending is just as much a surprise to them as the beginning was to the reader.

That got a bit philosophical there.  To make a long story less long, a Games Master that starts their campaign based off the character sheets of their players will get something that they are unlikely to ever get if they had simply written it themselves.  They get something new, something original and they get to have fun.

Backstory soup…now there is some food for thought, don’t you think?  Let me know in the comments below.

6 thoughts on “The Games Master’s Toolkit -More than the Sum of its Parts, How Early Player Involvement Enriches RPG”