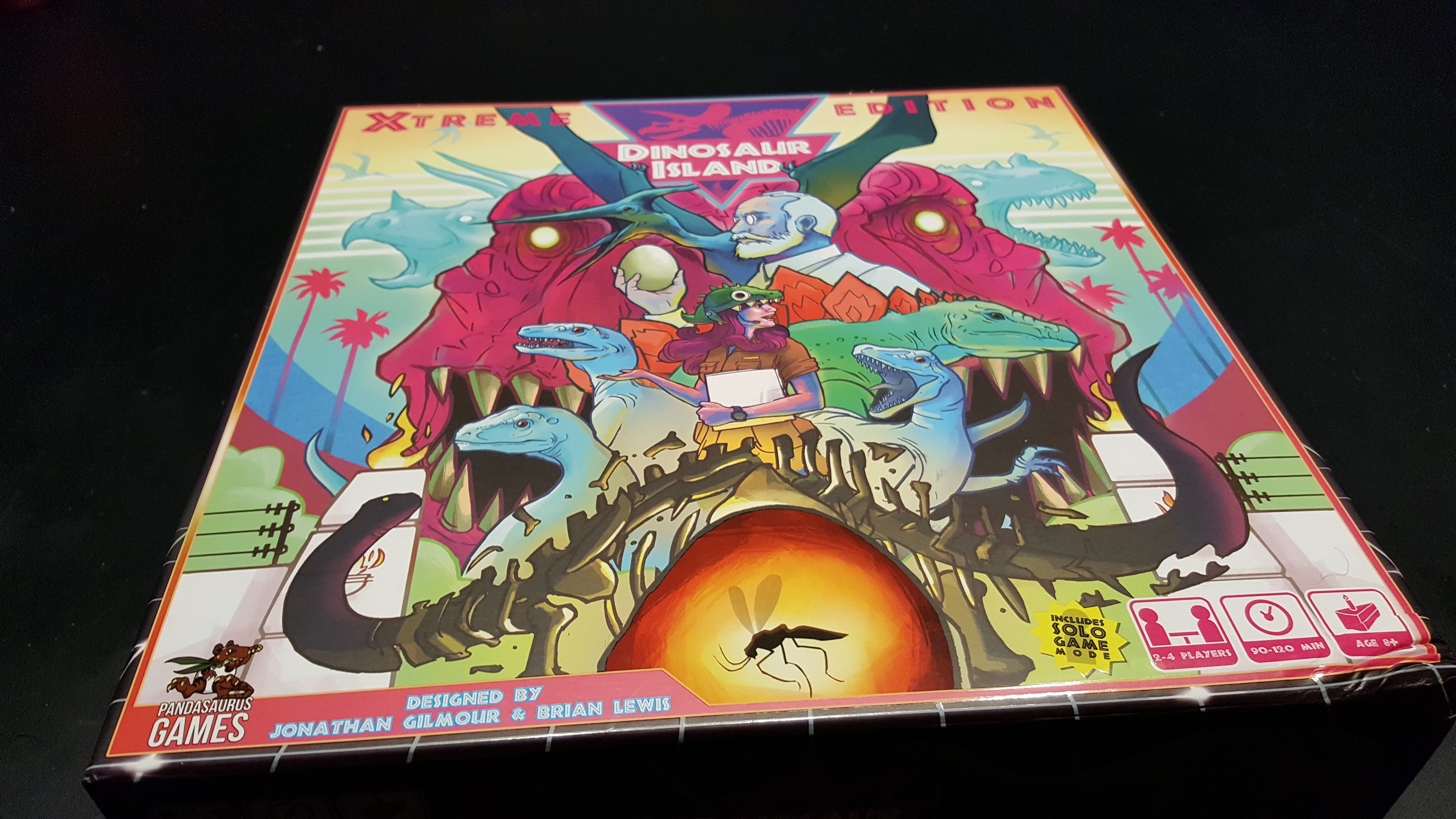 Hello everyone, welcome.  I recently alluded to the fact that I had less opportunity to play boardgames so their would be fewer boardgame posts, however I was recently invited to a friend’s house on one of our non regular gaming days.  We were going to play SSO, or S.S.O which is the acronym for Starship Omega, a coop game where you play a crew of space rescue technicians trying to salvage a derelict/figure out why it is derelict/figure out why the crew is dead before running out of oxygen.  However, the rules were so poorly written as to be virtually impenetrable.  As was the quickstart first turn guide we had from the manufacturers.  So, with a heavy heart and disappointment we put S.S.O away for another day and dug out a game everyone else had played but me; Dinosaur Island.

In this game, each player takes the role of a business tycoon building their own Dinosaur Themed Park.  Looking at the box and many things in the game, I really don’t know how this game didn’t get a cease and desist from the makers of Jurassic park.  I mean, the box art features prominently a mosquito in amber and the font used for Jurassic Park.  And one of the attractions in the game is a food concession called the “Clever Grill”.

Players start with one paddock with one dinosaur in it.  I had Gallimi-something, but I decided to use the Stegosaurus models anyway.  So in my mind it was a stegosaurus enclosure.  So, the game goes in a number of phases.  In the first one,dino dice are rolled, and are available to the players.

The dice feature things like DNA, extra workers and Paddock upgrades.  Taking it in turns, players play their three scientists in this phase.  Players can assign a scientist to grab a dice, gaining the benefit of that dice be it DNA, worker or paddock, or they can increase their DNA storage space, build a brand new paddock or draft a scientist as a worker.  Incidentally, just to add a random factor into the mix.  Any dice not selected by scientists that had purple spots on them are put to one side.  The one with the largest number of spots adds them to the threat level in all parks for this turn.  More on rampaging dinos later.

As I said, scientists can be used to build paddocks.  There are three ranks of paddock, labeled in game as herbivore, small carnivore and large carnivore.  I would simply label them 1, 2 and 3 as there were some herbivores in amongthe small carnivores as it turned out.  Your scientists have three levels and if you want a level 3 paddock you need to assign your level 3 scientist.  Level 2 paddocks need at least a level 2 scientist and so on.

The large green rectangles with Triceratops on them are the dinosaur paddocks.  The top one is always on show.

Once the scientist phase is done players take it in turn to go to the market twice, which is blue phase 2 in the image above and the cards to the right of it.  Each time at market you can buy upgrades, attractions or hire specialist workers.  Some workers increase your workforce size as well as giving benefits, whereas others do things like reduce costs or increase security.

In phase three, you assign workers from your supply to do various things such as splice DNA, build dinosaurs, increase security or trigger the effect of an upgrade.  For instance by the end of the game I had quite a few upgrades that gained me DNA and allowed m to swap it to other kinds of DNA.  Each dinosaur you build requires specific amounts of DNA of specific types, type one dinos being easy and type three being hard.

DNA replacement and Dino research can be upgraded during the game, as can the tool bench and as you can see there are two “under construction” spaces where you can add lab upgrades.

Then comes phase 4.  Guests.  You look at park excitement level, which increases every time you build a dinosaur and the level is the number of tourists the park attracts.  A number of tourist tokens are taken from the tourist bag, blind.  Yellow tokens mean paying customers, and red means hooligans that sneak in without paying.  I like to think of them as raptor fodder.

Each attraction, be it a Dino paddock, ride or concession has a max capacity.  Dino paddocks can hold a number of guests equal to the number of dinos they hold, but will only attract a number of tourists equal to the dinos in the paddock.  So, a level 4 paddock with 2 dinos will only get 2 visitors even though it could hold 4.  Any guests that cant find space in the park wait outside until folk leave and then enjoy the attractions, however they are not counted in victory points at the end of a round.

On my first turn I was able to use one of the DIno dice to upgrade my starting paddock for free and with a bit of DNA swapping I was able to get an extra dinosaur.  Unfortunately, by this point no one had explained the necessity of security and how park threat worked.  Basically each additional dinosaur increases the threat in the park.  After guests enter the park, but before they are scored, players need to check to make sure park threat is equal to or less than park security level.  Mine very much did not fall into this category on turn one.  So, by the end of turn one I had rampaging dinos, who, despite their herbivorous nature, ate most of my guests and as a result I lost victory points.  However, I learned my lesson and over the next few turns was able to build my park up preventing any future accidental rampages.

I was able to hire and build a lot of DNA gaining and swapping advancements which meant making dinos was actually easy.  It was quite late in the game when I learned the strength of other attractions, and of the upgrades to the Dino Research and DNA Replacement tiles.  I spent the entire game in second place (of three), and could see that the leader was about to score their final victory condition, so decided a last valiant effort to keep up and not be overtaken by third was in order.

By the final turn I had 4 paddocks, my starter with 2 stegosaurus, 2 Brachiosaurus, 1 Spinosaurus and an as yet empty Anklyosaurus paddock (somewhat embarrasing as I had christened my park Anklyosaurus Land, it being the best dinosaur ever – and the one dinobot they didn’t make, and I have no idea why they wouldn’t make one of those.  An anklyosaurus Dinobot would be an absolute tank…).  I also had a lot of workers and a fair amount of money.  The final victory condition as yet unscored was get park excitement to 15.  I was on 8 or 9.  Sarah was on 12.  I knew she would score it but so long as I scored it this turn too, I would still be eligible.  So I hatched a plan.  Which involved hatching another Spinosaurus and 2 Anklyosaurus.  All of which I could manage given I had funds and ample DNA storage.  What I didn’t have was people to staff security given that I was just about to raise the threat level by 4 ranks.  I knew this was going to happen and I embraced it.  I built my dinos and got my excitement to 15 or 16, let people enter the park and watched as 4 of them got eaten.  4 VP penalty, however 7 for scoring the VP condition = net win.  And the Dinos didn’t need fed that day.  Everybody wins.  Apart from those that were eaten.

This was such a fun, tactical and slightly silly game.  Probably not meant to be silly, but I imagined rampaging herbivores eating tourists, it just made me laugh.  I thoroughly enjoyed this game.  There were logical tactics, things made sense and you could really feel your park developing.  I recommend.