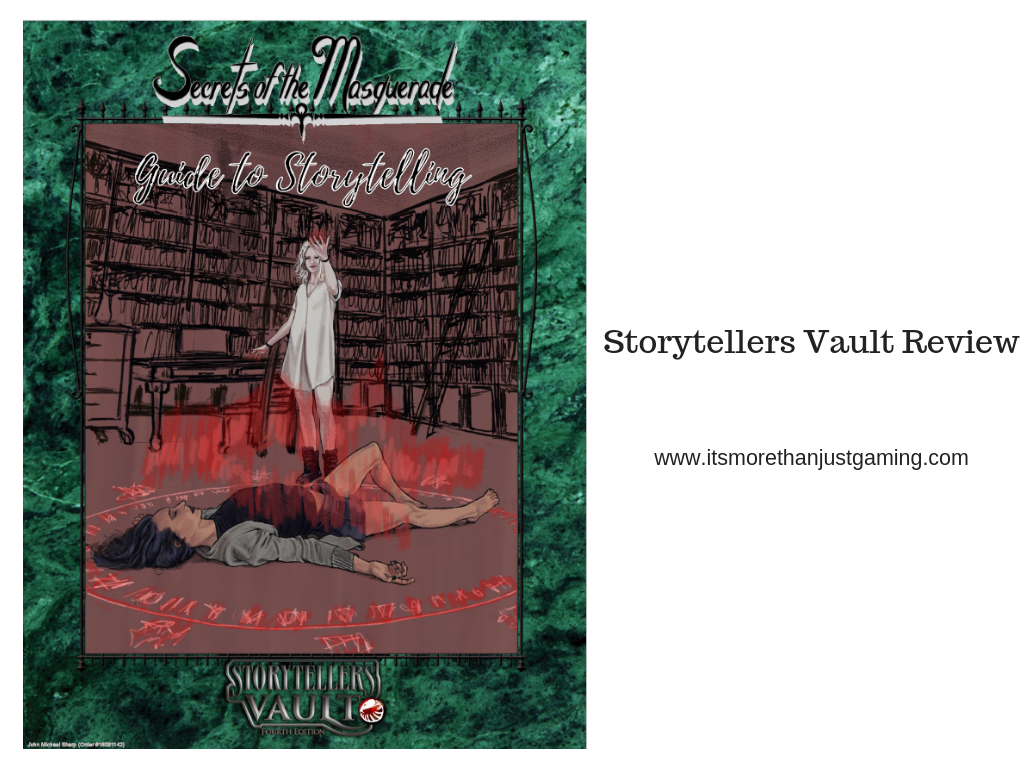 Hello everyone, welcome.  Today I am writing a review on a Storytellers Vault Product called Secrets of the Masquerade: Guide to Storytelling.

Well, if you are reading this then you must be at least vaguely familiar with World of Darkness games, or at the very least, Roleplaying Games in general.  There are always more players than Storytellers in my experience in the gaming community, though there are plenty of folks willing to have a go at running a game but not knowing where to start.  Or perhaps they get caught up in nervous procrastination over the seemingly overwhelming nature of running a campaign.  This is compounded if they have been in really good games run by skilled Storytellers.  The best way to go is just to give it a try, however there are plenty of resources available to help the new Storyteller.   Secrets of the Masquerade: Guide to Storytelling is one such resource.  Incidentally, a bit of shameless self promotion but I have a series of articles called The Quest for the Perfect Game, and a second looser series called The Games Master’s Toolkit available to read giving my take on how to run a game.  However, let us focus on Secrets of the Masquerade: Guide to Storytelling.

Secrets of the Masquerade: Guide to Storytelling is a work of around 80 pages that details various aspects of running a roleplaying game.  It is admittedly tailored specifically for the World of Darkness setting of personal horror and much of the advice it gives relates directly to that, however there is general advice about who to have at your table during a campaign, and situations to avoid, that is basically true for all roleplay games.

Generic stuff tends to be about boundaries and dealing with mature content respectfully.  For instance, providing X Cards/Red Cards to players to raise if something about the description is bothering them.  For instance, imagine someone in the game who finds dentistry and activity on teeth to be disconcerting.  Imagine then that the Storyteller describes a scene where a player character or non player character is strapped into a chair and having their teeth pulled out.  The player who feels uncomfortable with this could then raise their flag and the storyteller could simply move to a generic description “You find such and such in a chair being tortured” instead of “You find such and such strapped into a grey reclining dentist’s chair, having his teeth pulled out by bad guy number one”.

There are also suggestions on group makeup with the ultimate aim to avoid player drama at the table.  Such as two polar opposites on the political spectrum getting into a heated and disruptive quarrel at the table.

The more specific stuff about World of Darkness content pays particular attention to Vampire: The Masquerade  but a lot of what is discussed could be easily applied to other World of Darkness games, such as Werewolf: The Apocalypse or Changeling: The Dreaming.  This tends to be about the history and geography of the setting and then advances into who the Non Player Characters are, making them integral to the story, and how to avoid making them quest givers and friendly tutors.  It is the World of Darkness, after all.

The suggestions given about how to keep a game respectful whilst dealing with adult themes is really helpful and it is my observation that more tables would benefit from reading these suggestions.

There are detailed discussions about layers of what people know and what is actually true.  This becomes quite intricate and has incredible potential, and is something that Storytellers might shy away from as it seems complex.

There is a great section on running short games, and how preparing them differs from long games.  This was of great interest to me as personally I struggle these days with the finale oriented game.

There is lots of helpful advice about building interesting Non Player Characters to have them avoid clan stereotypes and be a bit more than an advanced character sheet.  Building on this, in actual fact if you know your non player characters well enough you probably don’t need full character sheets as you probably have a good sense of what they are capable of, should it come down to an opposed dice roll.  This is something I already do myself, though admittedly this is more for lower tier npcs until the players show an interest in them.  Then, the control freak in me gives them full stats.  However, it is a good way to save you some time when preparing NPCs for your game, without doing them a disservice.

Available as a separate entity on the Storytellers Vault, but included within this product is an excellent guide specifically for Vampire: The Masquerade characters on why characters are sired.  I am going to build on this in my next point.

There is a lot of advice on making the non player characters individuals including why any one non player character would sire another.  This advice is built around the idea of avoiding the cliche game where players look for a gangrel because they need information about travel outside of town, or they need a nosferatu because nosferatu know stuff.  Instead, perhaps the players need to speak to Jimmy, a Nosferatu they have met once or twice who seems to have his finger on the pulse of the street and a lot of friends who owe him favours.  It is all about immersion and realism.

There is a suggested merit, Storyteller Benevolence, intended to help out with newer players (or at least players new to the World of Darkness)

There are suggestions on how to add depth to the non player characters with specific reference to the fact that none of them should actually be admirable.

The Stuff you Need to Make Your Own Mind up About

Not much to say here.

The advice/suggestions are very detailed and might come across as a bit intimidating for rookie Storytellers.  However, the caveat is included, take what you needed and don’t sweat the rest.

I read this product and decided that whilst a lot of the content went to a deeper level than I normally go, or I have observed in other Storytellers, much of the information is common sense.  When I spoke to the author, they rightly pointed out “Common Sense doesn’t mean common practice.”  I can’t argue with that.  So with that in mind, do I recommend this product and would I use it?  Recommend, most definitely.  As much for the common sense stuff as anything else, but also because it deals well with issues of respect and mature content in a game and dealing with them without creating player drama.  I should say this is a recurring theme in Secrets of the Masquerade products, and one that does need to be shouted about.  Would I use this product?  Yes, and to one extent or other I already do.  The biggest impact on me, from this book, has been thinking about reasons for non player character embraces and from that I have been filling a notebook with interesting NPC ideas that defy stereotypes.  Granted, my sister’s dog did try and chew the notebook when I was pet sitting for her but he was good enough to chew the empty pages so I interpret that as he found them to be interesting.    As someone who writes fiction, I have shelves and shelves of “How to write” books.  This is a “How to write” book for roleplay, because in my mind an rpg is just a different way of delivering a story and this book provides thoughts and help on how you might go about this.

This book has lots of complex ideas in it but that shouldn’t put you off.  The ideas and advice is all good, and storytellers are free to use or disregard as much as they feel like to keep it all straight in their head.  I recommend.

All links beyond this point are Tag Free.

Click on the following link to purchase Secrets of the Masquerade: Guide to Storytelling

2 thoughts on “Guide to Storytelling: A Storytellers Vault Review”