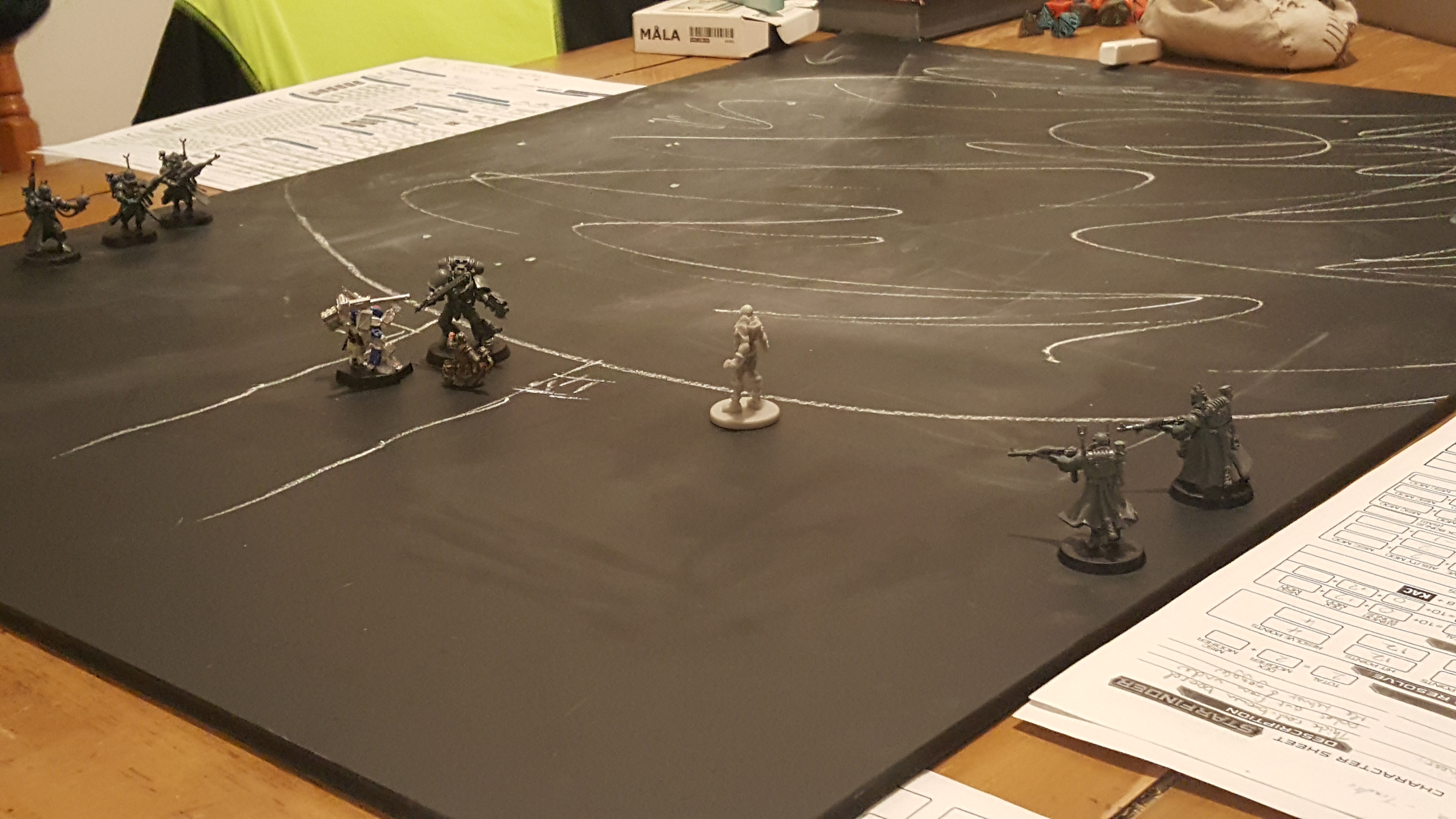 Hello Everyone, welcome.  Today I am going to write a bit about the latest part of our Starfinder game.  We actually only had a small group for this session (our numbers tend to fluctuate and characters are assumed to be in the background/on a rope etc so that they can rejoin the game when available) and this was also our first story with a new GM.  I should say that the intent of the ongoing game was to rotate GMs frequently, ideally everyone taking their turn.  For adventure driven games I imagine that is going to be fun as it will give us variety.  Some plot hooks were established by Pete when he was running the story, setting up a larger plot and it remains to be seen if any of the other GMs decide to run with them.  My turn is next and I am having thoughts about doing just that.  Stories that are the product of two, or more, minds can be unexpected and interesting.  Anyway, this time Chris was in charge.

Davis – A Dwarven Mechanic, Male, played by Pete with his tracked drone A.L.X

After returning to Chaval’s place following our introduction to OverGnome Mechanics, most of the rest of the group decided to party the night away.  Being somewhat tired after sabotaging two wmd shipments, exploding three times and creating an existential crisis for Jeff 12 I retired to my bed.

The next morning I arose to discover some very hung over comrades and a weary Chaval who informed us if we were looking for work today we should check in with Olivier at a shop named “The Cogwheel”.  (Note – I can’t recall the shop’s name so I am taking a liberty here).  As a group we decided to go shopping for some gear and then check out this Olivier.  I was looking for a battle staff with electrified/shock components on the end (Think General Grievous Bodyguards), and found none in stock/my price range.  My companions purchased various weapons, including what they are dubbing “Self defence Incendiary Grenades”.  Am looking forward to explaining that to an authority figure. We then decided to look up “The Cogwheel” and discovered it wasn’t in any of the station directories.  We asked a few passers by with no luck and some of my comrades started looking at their character sheets to see what skills they could use to try and find it.

I didn’t bother checking my character sheet.  I knew that at character creation I had purchased a comm link, and used it to call Chaval.  He answered and I informed him the Cogwheel was nowhere to be found, and asked him where it was.  He gave me the precise location.  We went there.

The Cogwheel couldn’t be found as it was renamed “The Gear Haven” (again, can’t recall what it was called so am taking a liberty).  It was being staffed by a human male, so we decided to talk with him.  It transpires he wasn’t Olivier, but he eventually relented and let us speak to him.

What we found was quite remarkable.  The shop front was basically junk and devices.  However, the rear portions of the shop were filled with clockworks of exceptional quality.  Standing in among them was the hooded and robed figure of Olivier.  On a hunch I asked the GM if there was any ticking coming from Olivier, who was facing away.  One really high roll later I determined that there was indeed ticking coming from Olivier, and a second later he turned around revealing that he was in fact a clockwork life form.  Think clockwork automaton encased in glass, with all of his inner workings on display – and they were intricate, and beautiful to the eyes of my character.  A quick conversation with the GM later established that this type of life form featured in the lore of my order, which venerates “The Great Symphony”.  This creature, a Cogsmade, was a being of perfect harmonious creation to my order and presumed to be mythical by my character, so I suddenly became a supplicant to Olivier.  This surprised the party, and perhaps amused them.

Olivier informed us that he was Cogsmade, and that he believed he was the last of his kind.  However he had learned that something matching the description of a Cogsmade Heart was found on the planet below.  He would very much like for us to go to the surface and retrieve it.  There wasn’t much to go on, only that one of the salvage groups had acquired the item.  We agreed to help out Olivier and made our way to the processing hub, and by virtue of making nuisances of ourselves we were able to speak to the foreman fairly quickly who told us to talk to the Grievands, one of the salvage crews on the planet.  I think he told us that just to get rid of us which is fine by me if I am honest with you.

We got the next shuttle down, and were given the mandatory Imperial Health + Safety disclaimer followed by some pills that would protect us from the radiation on the planet and we were deposited in a hangar next to a mountain of junk, near lakes of…we weren’t quite sure what.  We asked around about the Grievands and were pointed at a couple of robed figures.  Davis and I introduced ourselves whilst Twitch kept his distance.

We asked to speak to the Grievands as we had heard a piece of tech had been found on the planet and we had a buyer lined up.  One thing led to another and we wound up with bags over our heads being escorted to this group’s secret lair.  Twitch kept his distance and followed discretely in the event that we get into trouble.

We were taken to a large dome of junk, with a pool of bubbling, boiling, corrosive not quite sure what.  Around the lake of stuff there were robed individuals, with various cybernetic enhancements and they were giving all of their attention to a high altar where a cyborg was preaching about a prophet.  As part of the ceremony a net full of machine and tech parts was lowered over the bubbling pool in preparation for a sacrifice to the so called prophet.  We determined that this was some kind of machine cult whose beliefs were based around sacrifice to the machine.  This didn’t sit right with either of us, particularly given our mission.

We made a bit of a fuss to get the attention of the cult’s high priest, Cassius.  Davis, given that he was accompanied by his drone (basically a self propelled artillery piece) was escorted to the priest and began an effort to sway Cassius and his flock away from wasteful destruction of useful gear.  Cassius responded that the sacrificial items were given by the prophet and returned to it by the sacrificial pool, which irritated the Dwarven Mechanic no end who tried to make a solid argument about venerating the prophet by building stuff in its name rather than sacrificing.

I was observing all of this, and had come to the conclusion that the so called prophet was the cogheart we were looking for and that it was merely being used as a display ornament by Cassius to maintain control over the cult.  That was the point that I looked at my level 1 character with 8 ranks in religion and decided it was time to defrock the pretender and change the direction of his cult.  I had been chatting to a couple of the cultists who were assigned as my guards and after listening to Davis’ attempts to sway Cassius I started reiterating it to them and their nearby comrades.  And then I took a gamble and walked among them, telling them of our mission.

To find the heart of a mechanical life form, that I believed to be their prophet.  I then further revealed that we were sent by another mechanical life form, and began extolling the virtues of its mechanical perfection and that perhaps if they truly venerated the machine, it would be in their interests to hear me – the emissary of another prophet.  (I did pretty well improvising that sermon if I do say so myself, which isn’t bad for someone who is agnostic in real life…)

This caused some rumbles of dissent among the congregation; it was clear more than a few were actually considering my words.  Cassius did his level best to counter my preaching, but with Davis having already laid the groundwork for not wasting useful stuff and Saross knowing what buttons to press in his audience the cyborg was losing ground.  His attention was entirely focused on me, so he didn’t notice Davis sneaking up onto the high altar behind him.  I should say, my character can communicate telepathically with anything he shares a language with within 30 feet.  As I was preaching I was advancing and got within range of Davis and opened up my telepathy.  We agreed a plan very quickly.  Cassius was probably using the cogheart as a centrepiece to manipulate the cult, and was an obstacle not likely to reason with us for it.  He had to go.  I was to keep his attention, whilst Davis got in position.  And when he was in place, he pushed Cassius into the bubbling pool to his presumed demise.

I ascended the High Altar and denounced Cassius as a pretender who sought to mislead, and in the name of the congregation, I would seek out the Prophet.

I failed to notice that not a single one of the cult were moving, and thus I ventured into the private sanctum behind the high altar.  And that was where I found the prophet.

It was a Cogsmade’s Heart, technically.  Inside a living Cogsmade, whose body had been destroyed and much had been replaced with junk.  Not the heart we were looking for.  Only questions…