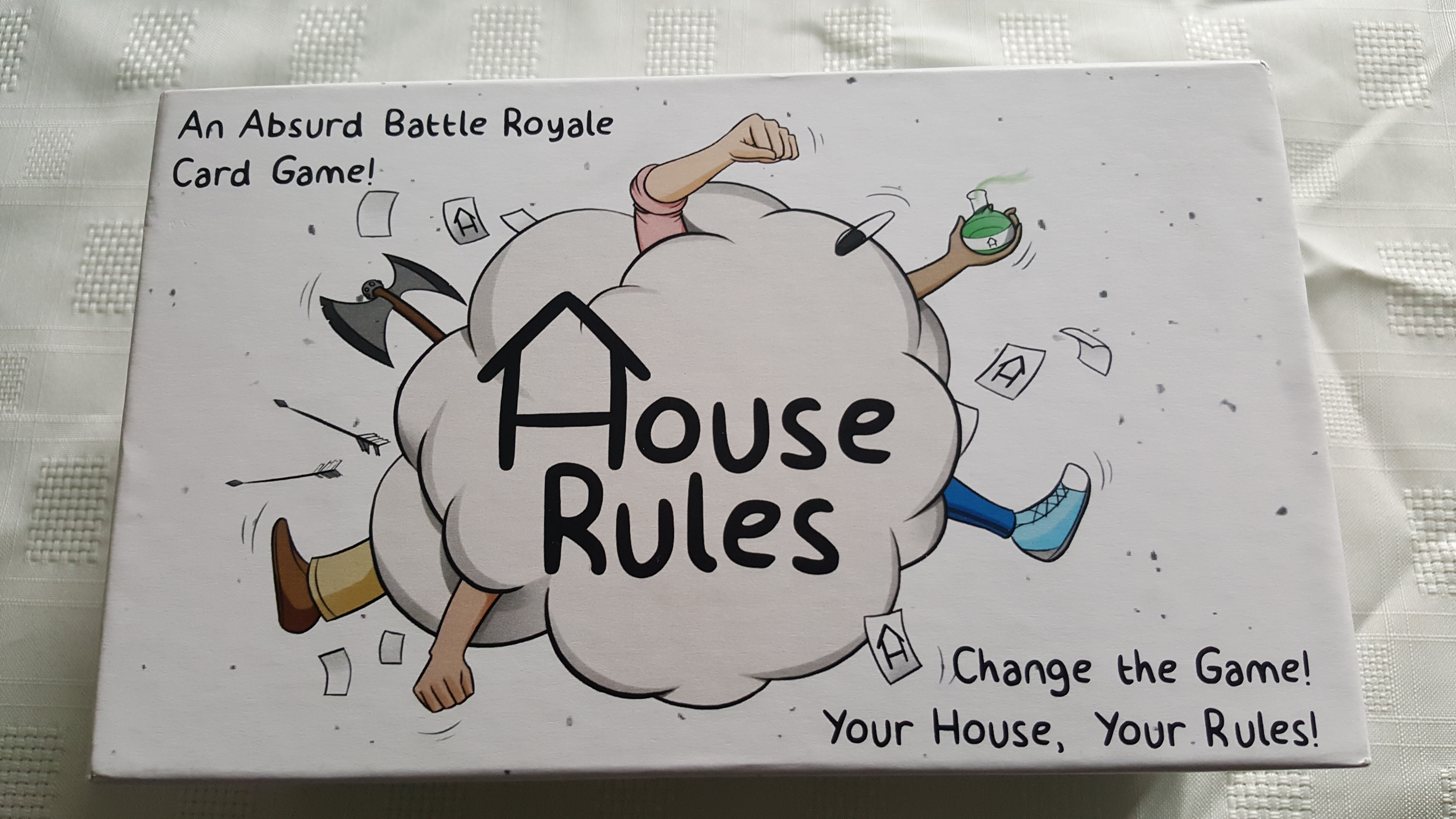 Hello everyone, welcome.  I was recently contacted by a games developer who let me know about his current project in development, launching on Kickstarter this November called “House Rules”.  He very kindly provided me with a review prototype and I have been able to go through the box, read the rules and have a play around.  And now I share my thoughts.  Please consider that I am working from a prototype so the final game may change slightly, and due to some personal health issues I didn’t get to spend as much time playing the game as I would like, so this is a basic overview.

The concept of the game is simple.  Over three rounds three to six players clash with one another trying to build up their stash in order to claim victory points.    Each round, players have a hand of seven cards made of 5 weapon cards and 2 rules cards.  There are also special action cards hiding in among the weapons that have game changing effects and each player also has one house rule card.  At the beginning of a round each player plays one of their rule cards face down and a weapon face down as their defence.  Remaining rules are discarded, and the played cards are mixed up and then revealed.  These rules as written on the card are now in force for the round.  There is also the option for someone to play their house rule card, whereby they write a rule on their House Rule card and play it instead, and so long as one other player approves it, then it is now a rule.  And it can be nearly anything, so long as it doesn’t affect scoring in the game.

Players reveal their defence weapons and the player with the lowest value weapon makes the first attack.  Attacks are made by playing weapons from your hand against a defence weapon.  The highest card wins, attacker winning ties.  Whoever wins adds their weapon and the loser’s weapon to their stash.  If the defender lost, they play a new defence card face up.  Play now passes to the player with the next lowest defence card.

During these clashes, there are special action cards that can drastically alter the game on short notice, see below.

So, what is to like about the House Rules?

House Rules is a straightforward, fast paced quickish game for folks who don’t have time to play epic stuff.

The weapons are humorous, made more so by the fact that you can write on any of them and some are specifically designed with blanks for players to fill in.

I think this adds to the humour of the game especially if you are playing with different people who might take a different approach when they see a blank on their card.

The volume of different rules cards mean that no two rounds are ever going to be the same which makes the game perhaps less predictable as strategies might have to change on the fly.  Again, some of the rule cards can be edited by players making them even more unpredictable.

And of course, there are the namesake House Rule Cards, whereby you can radically alter how the game plays according to your own whim.  So long as someone else agrees to it and it doesn’t affect the scoring.

You get a fairly solid game in a pretty compact box, and I think it will appeal to the folks that enjoy games such as Munchkin, Cards Against Humanity and Joking Hazard as it has much of the whimsy that can be found in those games (perhaps less of the 18+ dark humour that you might find in CAH).

This is a definite worthy addition to a gaming collection for folks that want something fun and speedy without overly complex rules.  Or maybe they will be.  That really all depends on the players.

You can get updates about House Rules HERE