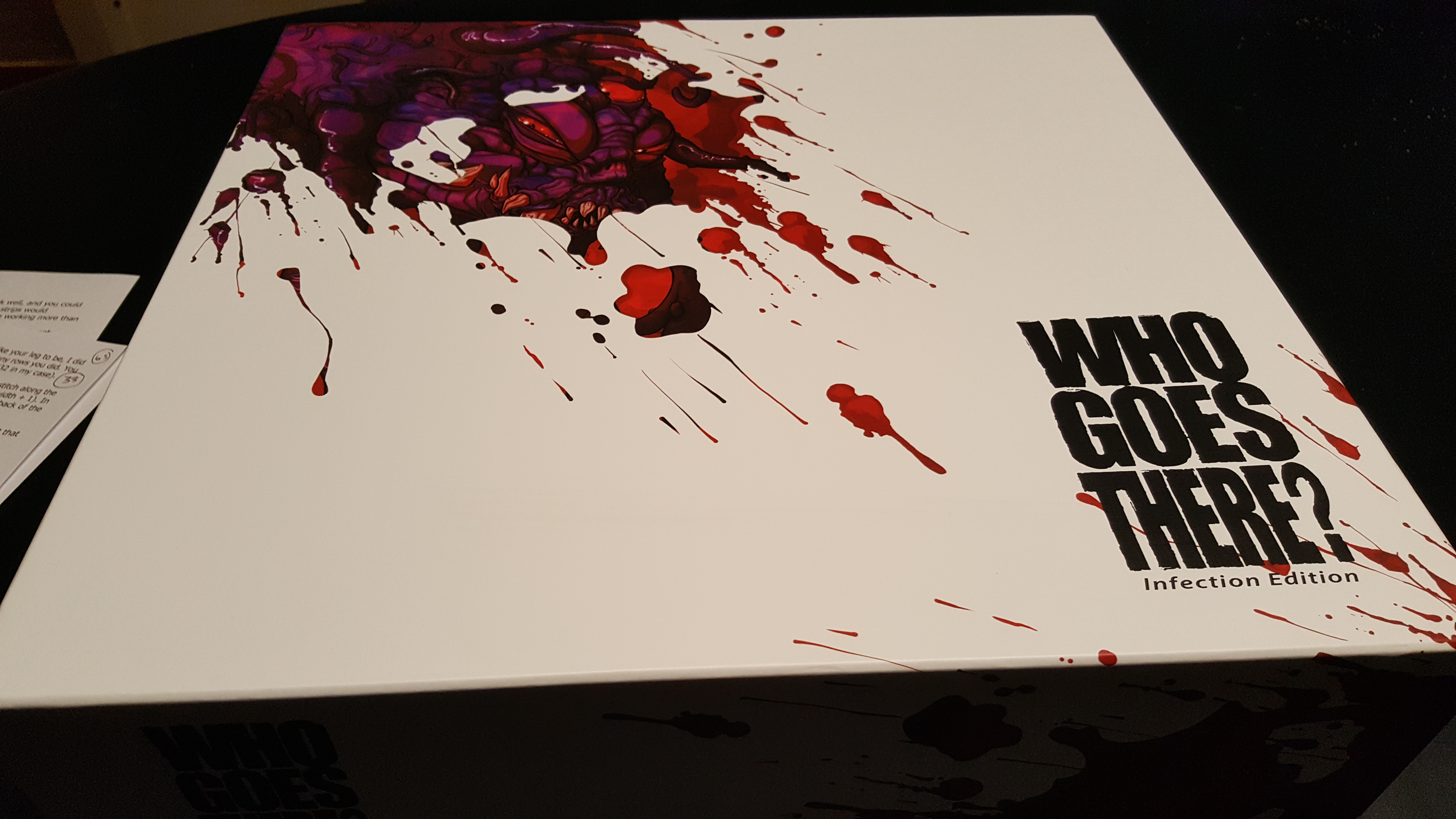 Hello everyone, welcome.  Today I am writing about a game I recently played called “Who Goes there?”  “Who Goes there?” is a semi coop game that my friend Sarah backed on Kickstarter that we have all been eagerly awaiting, and one that arrived a few weeks before that Sarah and my other friends managed to play a few times when I was unavailable, and they thoroughly enjoyed it.  The reason for our anticipation is that “Who Goes There?” is the name of the short story that the movie “The Thing” by John Carpenter is based.  And this game is most definitely based on the movie.  (I have to confess, I have never read the story).

The board layout is fairly straightforward.  In the above image we see that on the left we have the inside of the polar research station where the action takes place.  There are cards for workshop and storage that can be drawn as part of the search action.  On the right there is the outside area, with decks for phases 1 through 3, phases determined by the position of the dog on the track (The dog runs along the track, moving one space every turn until the end of the game).  Players can spend time inside finding gear and food as well as class abilities, or they can suffer stamina loss by searching outside to gain XP and potentially useful stuff.

Each player chooses a character, and I am pretty sure they are all characters in the 80s Thing movie.  I chose Norris, because he looked a little bit like a paranoid version of Beaker from the Muppet Show.  Realistically, since I hadn’t played before I really wasn’t sure what other criterion to judge the characters by.  The player board looked a bit complex, however as someone who has played Scythe I actually understood it fairly easily.  The 5 coloured cubes in the top area were my action tokens, and I saw that I could unlock a 6th with XP.  There were 3 green stamina markers in a stamina track.  The number of markers dictated how tired you were and mechanically, how many basic dice you had on a roll.  There was a 4th cube unlockable with XP and 2 others that could be gained through resting inside (I am not sure if the action is called resting, but it stands to reason).  At the bottom of the tray there were spaces for items, of which you could hold 2 at the start of the game unlocking a further three spaces with XP.  There was also a handy list of the types of cards in my character’s personal deck.

Turn order was straightforward.  We started by moving the dog and then resolving Eat and Sleep (More on them shortly) before revealing a Camp Event, which could be a vicious dog or a thing attack or some environmental setback that each player has to deal with.  In this case, it was a fire.  Some Events were instant, and others had to be dealt with by each player on their part of the turn.  Some caused a lockdown trapping the folks inside inside and the folks outside outside, and some only affected inside or outside.

In the event that it is a round where eat is highlighted on the turn track, each player needs to discard canned food or they pick up a Vulnerability card (more on that shortly).  If it is time to sleep, sleeping alone means the corresponding players take vulnerability cards whilst people sleeping in the same location trade their status clickers (more on them below).

Once eat, sleep and events are resolved players take actions.  They can move around, search inside for gear and food or personal equipment, build stuff or repair damage.  When outside they can search but it is possible that bad stuff will happen when they search outside…

Whilst there is some decent stuff outside and it is the only source of XP, you could be attacked by the Thing.  Resolving an attack is simple.  You roll as many dice as your stamina allows (0, 1 or 2) plus any bonuses from equipment or abilities.  Each die is D6 with a 50/50 chance of getting a success.  You need as many successes as the phase you are currently in.  As you can see from the card, failure means you get a strike (a wound) and a vulnerability card.  (Yes, I will tell you shortly…).  As you might expect, three strikes and you are out.

Other actions you can take are building items from components.  I managed to build a club, upgraded it to a torch and then a lantern using wood, screws cloth and matches  or something like that.  There are lots of equipment items that can be built from tools to makeshift weapons.

As you can see, Beaker had at this point built and equipped a club which gave him one additional die for attacks.  Upgrading to the Torch with cloth and matches would also give him an additional die for dealing with hazards (which included fire, so I wasn’t quite sure how that would work…) and then using alcohol and another match the torch could become a lantern (a bit of transformers going on here, but ok…) which has a bigger hazard bonus.

And finally you could trade stuff with other players so that if you needed food and someone had some, they could share it.  Or if they had spare cloth and I wanted to build a torch, they could trade it with me.  Which makes things easier.

I have mentioned vulnerability cards and the status clicker.  There are about 12 vulnerability cards in the game, and one of them indicates “You are the thing”.  That means that from that point onwards you are a traitor in the group.  You are wanting one human to survive to pilot the helicopter out of the research station since flying a space ship didn’t prepare you for 80s helicopter flight.  However, I did just say that there is only 1 “you are the Thing card”, so there can only be one traitor, right?  If you said yes I recommend you go watch the movie, and even the more recent prequel.  Or the Pingu version, Thingu. (they are all enjoyable in their own right) Where there is one Thing there are more as it is parasitic and spreads and that is where the aforementioned status clicker comes in.

The default setting is shown above with Green (Human) and Red (Thing) showing.  When two players trade, and I think when 2 players bunk in the same area (don’t quote me on that) they trade clickers.  If you are human you must slide it so that only Green is showing.  If you are a Thing, you can slide it either way to infect or remain hidden.  If you receive a red clicker, from that point on you are a Thing.

When we played Simon was the first to receive a Vulnerability card.  We found out later that was when he became infected.  I was the last human alive by the end of the game, playing cat and mouse with him.  I was trying to scrounge weapons all the while he was dumping useful stuff onto the bonfire and destroying it (or at least I think he was doing that).  I managed to kill him in the last turn (I hadn’t proved he was the Thing at this point, but I was insanely paranoid and torched him with a shotgun and my Lantern).  Unfortunately I miscalculated, and whilst I did actually kill him, I succumbed to wounds and sub zero temperatures and as a result nobody won.  But I count it as a moral victory, sacrificing myself to protect the world.

And this would have been the tragic part where Simon, who often plays up being dodgy in these situations for humour, reveals he was human all along.  He wasn’t, I hadn’t murdered an innocent human but the truth is my character could have and that felt very thematic in terms of paranoia that is present in the movie.

“Who Goes There” was a fantastic coop and then traitor element game that does a really good job of creating paranoia and simulating an infection that spreads throughout the humans.  However, as difficult as it is for the humans, the Thing players need to spare one as they need a helicopter pilot, so they don’t have it all their own way.  I recommend.  And now, for your viewing pleasure, found on youtube, Thingu.

4 thoughts on “Who Goes there? A First Play”