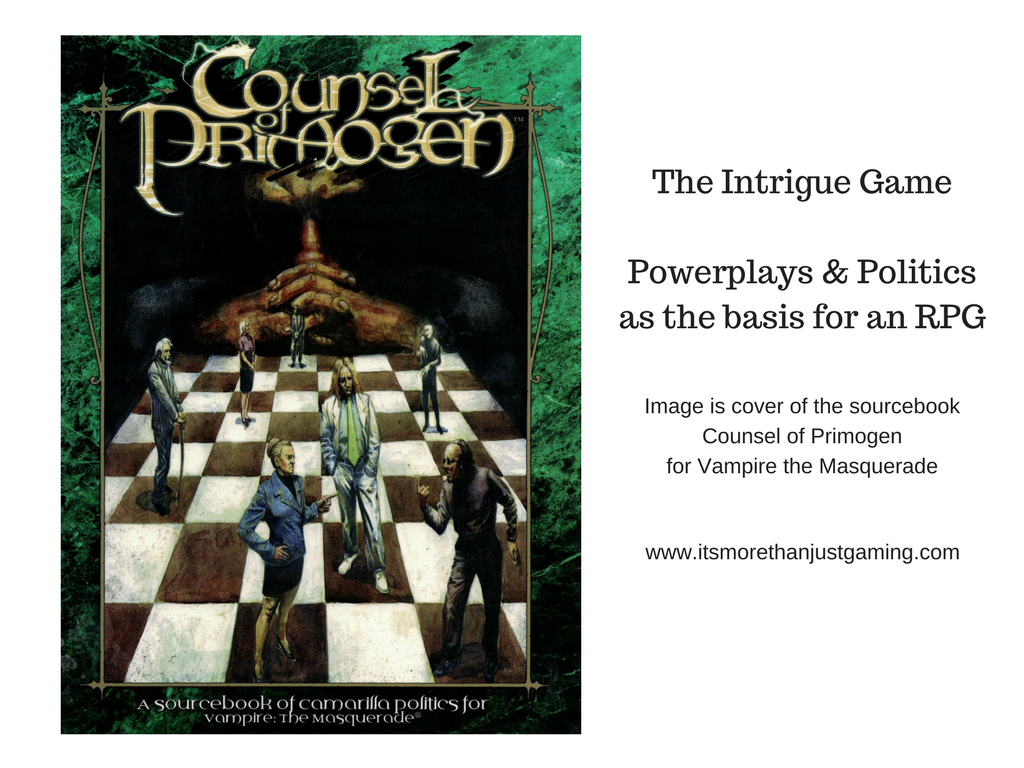 Hello everyone, welcome to you. Today I wanted to talk about intrigue and politics RPG sessions.  As per usual I will be referring to my game of choice, Vampire: The Dark Ages  as it works really well for this. World of Darkness games, particularly the Vampire Franchise are intended as games of politics rather than dungeon delving.  This sometimes doesn’t look too different from any other game where the players gain a patron and start doing tasks/dirty work/wet work for said patron.  And suddenly, by the end of the Adventure, the Patron is challenging the Ruler and has a good chance of winning as you spent the better part of the game crippling the Ruler’s resources.  But, there has to be more to it than that, right?

Today I am going to talk about the setup of an Intrigue based game, and also the sorts of things you can put as encounters in it.  I will be using systems I know can accommodate these sorts of encounters, but that doesn’t mean other systems won’t support this type of game.

So, for a politics game to work a powerplay has to be going on between NPCs/Factions, and the players need an incentive to involve themselves.  I asked myself, what sort of powerplays could their be?  I came up with a list, though it is not exhaustive.

All of these are powerplays that easily fit into a game of Vampire.  I recently designed and ran an intrigue game and I am going to refer to the process of making it.  So, I had a powerplay in mind and I even knew how the culprit was going to attempt it; remove a rival by luring them into an enemy ambush. All of this information had to exist (even if in multiple parts) that when assembled would point at this answer.  I started trying to draft a plot, and then as fortune would have it, the file containing what little plot I had written disappeared.  That was annoying but on the other hand I took it as a blessing in disguise.  In order to avoid boredom with writing, I began focusing on all the NPCs in the Campaign.  I had a list of 14 NPCs (of varying importance and detail, which admittedly grew as I wrote) so I started writing backstories and motivations for them.  This is stuff I would normally do for any game, though perhaps I wouldn’t always go to the same lengths of details.  However, this time I specifically gave every character some form of secret that they wouldn’t wish shared.  This might be as dark as “I am planning to murder X” all the way to something that someone might find simply embarrassing (rather than damning) “I have never kissed a girl, despite being a noble firstborn son.”

Suddenly, the players of the game have a means to gain leverage on each NPC.  That isn’t to say the secrets are easy to find, in some cases they probably won’t even come out in this campaign but I gave to all as I had to assume my player would be imaginative.  The next thing was to add specific triggers to each NPC.  Most of which was already covered in their background, but these triggers, when activated, will cause them to like or dislike players.  And then the final part of the politics set up was to outline exactly how the power play happened, and who knew what about it.  This is borrowing from my philosophy of not plotting out a game, which you can read about in my To Plot or Not post rather outlining what has gone before, and then seeding clues for the players to find and assemble.  The only thing then that is required is a hook to draw in players.  This is important.  I have been a member of various facebook groups about roleplay games and one of the frequently asked questions that boggled my mind a bit was, “How can I force players to walk the path I have set out for them?”

Basically, how do you get players to interact with the adventure you have plotted out.  One of the common answers was “Railroad them”.  Which I suppose works in short term, low impact games.  (By low impact I mean one where players don’t necessarily have a lot invested in their character or story, they are just present to roll dice and loot a dungeon).  I find that to be a bit boring and my response would be “Don’t.”  I also wrote an article about this, Avoiding the Railroad Game, which you can read if you want to read my thoughts on this in more detail.

In short, don’t force the game, rather give the players a reason to buy into the story.  Survival, personal gain, power, revenge, a vital piece of information about their dark past – whatever.  Then simply make sure your clues are findable and puzzles solvable.  When my player created his character, the largest part of it was he wanted to be a seeker after dark lore.  An occultist.  I hooked him by having one of the NPCs ask him to spy for him.  The NPC was the court chamberlain and he was tasked with unearthing dastardly deeds, but he figured court members would be suspicious of him.  Perhaps not so suspicious of the new, apparently guileless, arrival at court.  The chamberlain made this request after explaining favour trading currency, whilst sitting in front of his personal library.  The player leaped at the request asking for a favour, then saying he wanted to use it to study the books.  No need railroad here.

For me, this sort of game is going to happen in a palace, or a castle or manor or anywhere that has lots of separate chambers, passageways and even a main audience hall.  The players are given their hook to draw them into the intrigue and then it is up to them how they proceed.  The various NPCs are likely going to drift into smaller groups and begin their own conversations and intrigues, and depending on what the players choose to do will dictate what they learn.

Much of this is down to players roleplaying, and the GM knowing the NPCs (I had a look at my NPC notes last night.  They are extensive, because I need them to be).  However, this is also an opportunity in games like vampire for the characters to use some of their newfound powers.  As some of them are very social, making the player the centre of attention, or making them likable.  Some of the powers will allow them to eavesdrop on conversations remotely, or even sneak up on them.  And, the World of Darkness does actually have a social combat system where players can engage in debates with NPCs to humiliate them, elevate their own status (thus making the NPCs potentially more cooperative) or even to compel the NPCs to reveal certain things.

The Social Combat rules for Vampire are available in the Sourcebook, The Succubus Club (affiliate link below).  This is a fantastic resource for the courtly intrigue game.

With all this in mind, politics can be cut throat and despite the nature of the game being very social, that doesn’t prevent violence from seeping in in the form of murder or intimidation.  This is all well and good, and if as the games master you are planning to have an event where an NPC is murdered (to tie up a loose end), or have an attempt on a player’s life (they are getting too close), then maybe you want a timeline.  So, for instance you might say that certain conversations happen at certain times in the timeline.  All you really need to do here is make the timeline and at each point on that line, decide who is talking to (or likely to be talking to) whom and about what.  This might be a source of potential clues for the players (in fact each conversation should have something at least vaguely useful, even if on its own it doesn’t help), or it might simply be a set up for other stories that players can get involved in.

You might also find that part of your game becomes about breaking into somewhere, when you suspect another character has information.

Why Do this At all?

I think that is a fair question.  In any game you are (hopefully) going to roleplay with other NPCs to gain useful information, investigate things gone awry, fend off attackers and break into enemy lairs.  I would say first of all, it is a bit different.  It feels more like a story than a game of Heroquest.  Also, in games like Vampire where many of your opponents are super powerful, social combat levels the playing field somewhat.  No game 2 neonate brujah (a young vampire of reasonable social ability, generally) is going to win in a fight against a 400 year old gangrel (great fighters, not always socially adept – and very old in this example), but he might just outsmart him in a contest of wits.  This allows players to feel some accomplishment without the GM having to handhold them through the story.    This is actually a fairly common theme in such a game, in my view.  An intrigue game is about allies and enemies, secrets and favour.  It isn’t about a direct assault on the Elder’s citadel, which you would assuredly die attempting.  In an intrigue game, you win favour with other powerful beings by impressing them, or gaining secrets and using them.  And the finale is not an epic clash of steel, but perhaps a war of words where your allies and enemies confront the target of the Intrigue.  Again, the playing field is level despite power disparity and the game becomes more about player wits than dice.

I hope this helps people trying to run games of this nature.  Believe me, they are a lot of fun.

This section of this post contains an affiliate link, which means if you click on it and purchase anything as a result, I will gain a small commission.  This helps keep this website up and running.  Many thanks.   John

The Succubus Club – Available at DriveThru RPG as PDF or POD.  Click the Hyperlink or the Image to view at source.

The Counsel of Primogen – Another Sourcebook for Politics Based Games in Vampire the Masquerade – Available at DriveThru RPG as a PDF or POD. Click the Hyperlink or image to view at source.