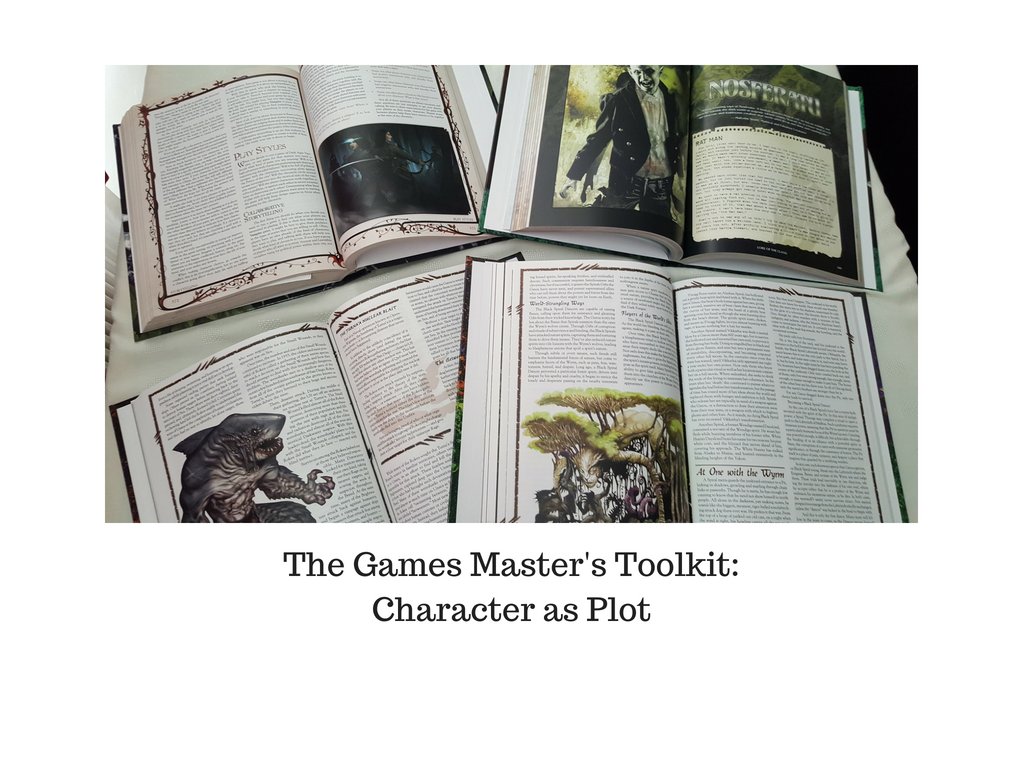 Before I start, I will supply  bit of context.  Every person who has ever run a roleplay game has weaknesses in how they deliver their games.  The skilled will acknowledge those weaknesses when they become aware of them, and try and work around them so their limits are less limiting.  My weakness is my tendency to overthink and over complicate things.  This has resulted, in the past, in very detailed and entirely rigid plot structures that worked so long as people stuck to the main path through the game.  It also meant that I always had an ending in mind when I added layer after layer to try and achieve that.  This was a lot of work, and when players inevitably go off course, the work becomes wasted.  Previously I have talked about writing what happens before the game in my post To Plot or Not.  In that post I used techniques learned studying crime writing, whereby you write what has happened prior to play and seed clues and then let the players interact with it any way they see fit.  In this post I am building on that idea.

This technique assumes a couple of things.  Firstly you are comfortable with your rogues gallery of NPCs (and in your ability to create them as needed) to be able to respond to what players do.  Second, you know the setting and all the locations players can go to.  And that is all that is required.

This technique also has a conceit.  Things don’t happen for no reason.  Things happen because someone caused them to happen.  In other words, Cause (a character) precedes effect (the Game).

So, you have your setting with NPCs and you want to run an adventure for your players.  Question 1.  Which of the NPCs are enemies of the player?  Question 2.  Are any of the NPCs doing anything that will affect the players?   If you can answer either of these questions, you have the basis for a game.

Let us use option 1.  There is an NPC who is an enemy of the player.  Any half decent NPC will have an outlook and a skillset, as well as contacts or allies and that will dictate what they try to do to a player group.

In a game of Vampire: The Masquerade I am running my players had an enemy.  She had appeared to them as a Lawyer, and someone who had access to troops, resources and some occult stuff.  They didn’t realise she also had a particularly potent magical array of abilities.  She had specific motivations and it took me 30 seconds to decide that this was going to manifest in her abducting the Elder of one of the players, setting up a future game.  She had a character sheet and the lackeys she took were my most basic statline lackeys.  (By that I mean I decide in advance what their average dice pool is and leave it at that, no more is required)

I wrote her motivation down, that was one line of prep.  I noted a place she would be afterwards.  I noted something (the next event as it were) that was due to happen further down the page.  And then I started the game.  I was hoping the abduction would take about half a session and the players might then find out the information that would lead to the future event.

Instead, here is what happened.

The Abduction scene took longer as the players put up a mighty, but ultimately futile, fight.

The players didn’t rush to the logical place where the villain would be (I figured they would realise a lawyer has an office and they might find something there).  Instead they reported in to the elders of the city, like good little vampires, letting them know that something was awry with the lawyer and that their elder was missing.  This resulted in the Sheriff of the City being brought into the plot (I had considered dropping him in later, but hadn’t settled on anything) and him taking charge (this was undesirable as I didn’t want an NPC in the driving seat).

The Sheriff then interrogated the players (unplanned scene) and from that scene figured out that there would be an office, and he decided there might be information there.  Being something of a thug, the Sheriff didn’t share his thoughts but took the players to the Office, then hid them round the corner and told them to wait here.  Being of a sneaky sort, he left using his invisibility powers to infiltrate.

He then didn’t come back.

The players waited for ages, and decided to disguise themselves before doing a bit of breaking and entering.  This led to an unplanned scene where an Irish Beat Cop (undoubtedly days from retirement) arrived on routine patrol, meaning the players had to do something to avoid detection/avoid looking suspicious.

They succeeded and broke into the building with the lawyers office, and snuck upstairs.  I had planned for them visiting, and even perhaps confronting the Lawyer Villain.  However, given how badly she had beaten them in the previous game they decided stealth and evasion was the best option.  The players snuck through a building, neutralising Clarence the Security Guard (another average statline NPC dropped in for fun) and then broke into the Lawyer’s outer office.

The players searched the office, all the while making stealth checks.  Again, this was unplanned but it yielded some useful information, which the players stole before fleeing and returning to the Elders of the City.  This information was unplanned for the story but was reasonable to obtain from a search of a Lawyer’s office.

This led to an encounter with another Elder who gave the players their marching order (Sit down, shut up, we’ll handle this…)

The players disobeyed (I knew they would, I was hoping they would) and then decided to confront other characters (implicated in the Lawyer Evidence), leading to another almost break in and that is where we left it.  Two sessions into what amounts to a scenario in three lines, and we were barely approaching halfway point and we had ended on another unplanned scene which would have repercussions of its own.

So, now that I have outlined a specific example and organised my thoughts how can you use it?

Well, if an NPC is doing something against the players you will get play out the following.

Is the NPC acting alone or in concert with others?  If they are working with others, the players will have lots of fun finding connections.  Here is a secret.  So long as you know who is working with whom, you don’t need to plot out where all the clues are. If the players go somewhere and do something that would reasonably yield information (and they don’t screw it up), then give them that clue.  They can then have fun chasing that lead.

Do the players have allies or contacts they can visit to gain information?  That is a scene to play.  Are those contacts and allies strangely silent or missing?  Perhaps the NPC enemy took them out of play?  Investigating that could yield clues.  Perhaps some indicator of the hired gun used to silence a snitch.  Finding the hired gun and interrogating them is a couple of scenes.

Basically, if you have your NPCs in mind and you know your setting, the game can evolve pretty much any way you like.  You don’t need a plot, just someone with a motivation to do something.

Also, don’t forget, if your players have contacts and allies in the game, things affecting them can also act as plot hooks.  So for instance, using the Vampire example again, perhaps the character’s elder is not abducted.  But maybe the mortal informer they have in the police/media/mob/anything winds up face down in the river, then that is a reason for the player to get involved.  In a case like this the motivation for the villain could be removing a spy, or even removing a spy for a client.

Ok, so I have meandered a bit as I usually do when writing these posts, lets try and pull it all together into a list, because lists are good.

And those are my thoughts.  I have a couple of questions for you.  Does that make sense?  Do you feel like you can use this?  Does it feel like I am telling you stuff you already know?

Let me know in the comments!