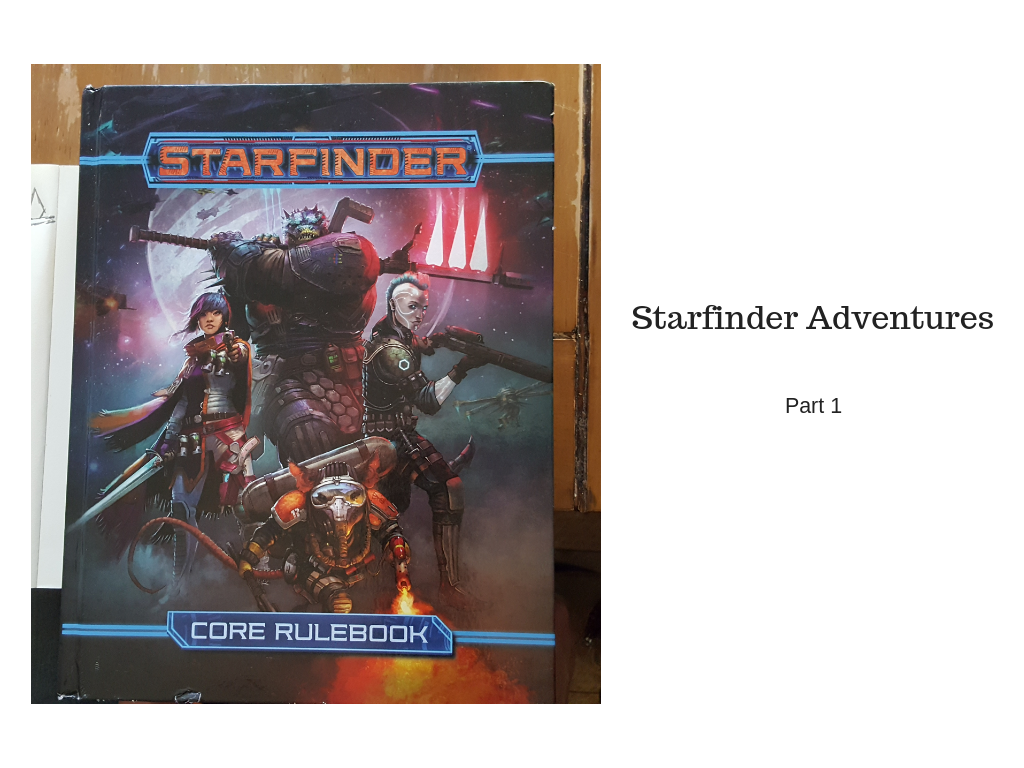 Hello everyone, welcome.  Today I am going to be writing about a game I recently played which I learned about when I attended the UK Games Expo earlier this year.  The Game in question was Starfinder, and I heard about it as one of the staff developing the game was a participant in RPG Live Plus which I was fortunate to see and was able to record.  Anyway, you can click the hyperlink to watch the video of a bunch of grown adults doing a parody of a C’Thulhu Game.  Back on topic, my friend Pete asked me if I was interested in playing Starfinder, which was basically Pathfinder in space.  I am in quite a few games right now, but as I am a glutton for punishment I said sure.

I initially thought a Cleric who also happened to be the ship’s engineer would be an interesting concept to play.  However, Pete was playing one of his signature characters (A dwarven engineer) so I decided that playing an engineer/cleric would be a tad redundant.  I started thinking along entirely different lines, in this case a wandering space mystic.  I didn’t have a purpose for him at this point, but as this type of group tends to be more adventure-centric and as we are rotating GMs every few sessions, I didn’t need a particularly detailed background for him yet anyway.  I asked if I could play a monk type character that could wander around our star system spouting occasional wisdom, and beating down things that underestimate him.  I wanted him to feel like a space mystic, like Chirrut Inwe from Rogue One.

After rejecting almost all classes and races and backgrounds, I created a characters who was a Lashunta (Humanoid with antenna, similar to Mantis in the Guardians of the Galaxy Movie), Solarian (Mystic Warrior that harnesses a form of the Power Cosmic to create weapons and combat effects) with the Priest Background.  I figured my character, being mildly telepathic as a result of being Lashunta, and being attuned to cosmic energy as a result of being Solarian received some form of revelation during his meditations.  He perceived the ruling power, an empire, as being a growing organism that has become sickly.  Or, to put another way, he perceived a once healthy organism as one now blighted with disease and corruption, even cancerous, and thus requiring radical treatment.  Upon returning to consciousness he interpreted the vision as a directive from the cosmos warning him of the growing Imperial Authority and its authoritarian ways.  Perhaps it served a purpose, once but he foresaw a future where it completely fell to corruption.  And as such, he decided to begin exploring the underbelly of society, the criminal and outcast fraternity making his way as a negotiator and arbiter for these disparate groups.  He was on his way to Tekris Station along with an associate when his ship is attacked by pirates.  We escaped in a pod and were picked up by a passing space bus who took us to the station and relieved us of our money for the privilege.  And that was where the game started.

My character, Saross Kirran, and Chris’s character Hugh (not sure last name) boarded Tekris Station.  Chris was playing a Technomancer Human Medic type thing.  We boarded a station that looked somewhat like a cross between Mos Eiseley Cantina and Deep Space 9.  We were immediately approached by a small Ysoki (Ratfolk) giving out flyers for a place called “Chaval’s”, which billed itself as a place where new folks could find bed, board and work.  Being new to the station and spotting a plot hook a mile off we decided to visit this place.  We found it quite easily.  Outside there was a commotion.  An older Ysoki was having an argument with a group of 5 Shirren (Insectoids).  Apparently the Shirren had been contracted to do a job, had failed and were demanding payment.  They were getting a bit rowdy.  Fortunately the Ysoki had finely tuned Player Character Senses, spotted us and offered us Bed and board if we would help him if things got rowdy.  Hugh didn’t wish to get involved.  Being a man of Peace I advanced and suggested to the Shirren that cooler heads might prevail and I asked them what seemed to be the point of contention.  In the first of a series of staggeringly bad rolls (I got three natural ones in 5 dice rolls that night), I failed my diplomacy check and combat started.  The Shirren in front of me attempted to attack me and failed.  Being a man of peace, I summoned my Solarian Gauntlet (Think Green Lantern deploying gloves made of the power cosmic) and then knocked the Shirren out cold.  The older Ysoki brained one of them with a club and seeing they were outmatched, the Shirren fled.

The Ysoki thanked us and introduced himself as Shaval.  He invited us in and true to his word offered us food or drink and a room for the night.  He then asked if we were looking for work.  We were and Shaval told us there were two jobs available.  I suggested it looked like he had one with more urgency than the other, given the Shirren didn’t complete their task.  Shaval agreed and told us if he told us about the job we had to keep it secret.  On pain of death.  We took the job.

A freighter with cargo unknown was docked in Docking Bay 12.  Shaval’s client, a human crimelord by the name of Noals wants the nature of the cargo determined and stolen if possible or destroyed if not.  Intelligence gathering was our primary goal, depriving a rival of whatever this valuable cargo was, the secondary.  I flat out stated that if the cargo was living sentients, I would not kill them.  Chaval seemed to respect my candour, and did his best to assure me that the likelihood of the cargo being passengers was slim.

We made our way to the cargo bay and slipped in through a maintenance tube.  We found ourselves hiding behind some crates in a gymnasium sized hangar with a cargo ship parked.  An official with a clipboard was directing ship’s crew in unloading cargo.  Hugh and Saross did a quite recon of the bay and determined there were a number of camera blind spots.  Saross clambered up on top of a crate and observed the workers, determining that our target was a shipping crate about 1 metre cubed.  They were loading it into another container.  Using Saross’ racial ability of detecting thoughts, it was confirmed this was the correct crate and they were expecting someone imminently.  The crew boarded their ship and Saross signaled Hugh with his limited Telepathy that the coast was clear.  Hugh snuck out from cover and moved to the crate, avoiding the cameras.  The crate was sealed.  He tried, without much success, to force the crate open.  Saross tried to help, causing more noise than success.  However, it was enough to get the large container open (think shipping container).  Unfortunately, they heard us forcing the crate from within the ship.  Fortunately, the Lashunta have Psychokinetic Hand as a racial ability.  Saross used this to manipulate the controls on the loading ramp of the freighter, closing and buying time.  This confused the crew, who lowered the ramp again.  The ramp closed again.  A few times, buying Hugh time to sort out the cargo.  We had a demolition charge specifically for dealing with whatever the contraband was.  Hugh had been inside for a while, and I had just rolled a 1 which meant that the ramp antics were over.  Clipboard and friends were descending the ramp just as Hugh was leaving the crate.  Saross had positioned himself beneath the ramp, waiting for them to exit and leaped out behind them simply saying “Hello there” a few seconds before my Nova ability detonated.  Knowing that the stealth portion of our mission was up when I got the one, Saross began charging a solarian power before hiding and it was ready by the time the crew exited the craft.  Two of five enemies went down in the initial blast.  Combat started.

Hugh managed to Zap clipboard with a technomancer lightning type spell a couple of times scratching him.  Saross tried to daze Clipboard, but this failed and resorted to knocking out one of the crew with Solarian Gauntlets.  Three rounds into combat, and Saross detonated again, after taking a couple of scrapes, wiping out the crew and setting off the fire alarms.  We hurried through the maintenance shafts and made it back to Chaval.

He was pleased that we completed the task, and told us that alarms were bad things.  Saross put on his negotiator hat and agreed that alarms were bad things, but sometimes unavoidable, particularly when sent in blind to a job that had already been bungled placing the target on alert.  Chaval conceded that he wasn’t criticising and asked if we had time for another job.

Job 2 was simple.  We were to work for a local casino to try and catch out a thief.  A Lashunta woman who the casino suspected of cheating.  We were provided money for our cover and pins that would identify us to casino staff.  Saross took the roll of gambler (despite Hugh being a better cheat).  His plan was simple.  She was a Lashunta, so he knew that she also had the psycho-kinetic hand ability.  He would observe her betting pattern and use his minor psychic ability, Detect Magic to catch her cheating.

This proved to be a red herring (probably put in to catch out Saross).  However, as the Mark was leaving Hugh noted some weird mono-filament type stuff along her arm.  He got Saross attention who established a telepathic contact.  Hugh determined it was some kind of force field manipulating device used for cheating and showed Saross, who established a contact with the casino Pit Boss and showed him.  The mark was arrested for cheating before she got out the front door.

Saross and Hugh returned to Chaval’s for meal and rest, eager to see what the next day had for them.

And that was our first session of Starfinder.  I personally quite enjoyed it and am looking forward to our next adventure, when our full group should hopefully be present.

3 thoughts on “The Game where I Exploded. Twice. Starfinder Adventures Part 1”