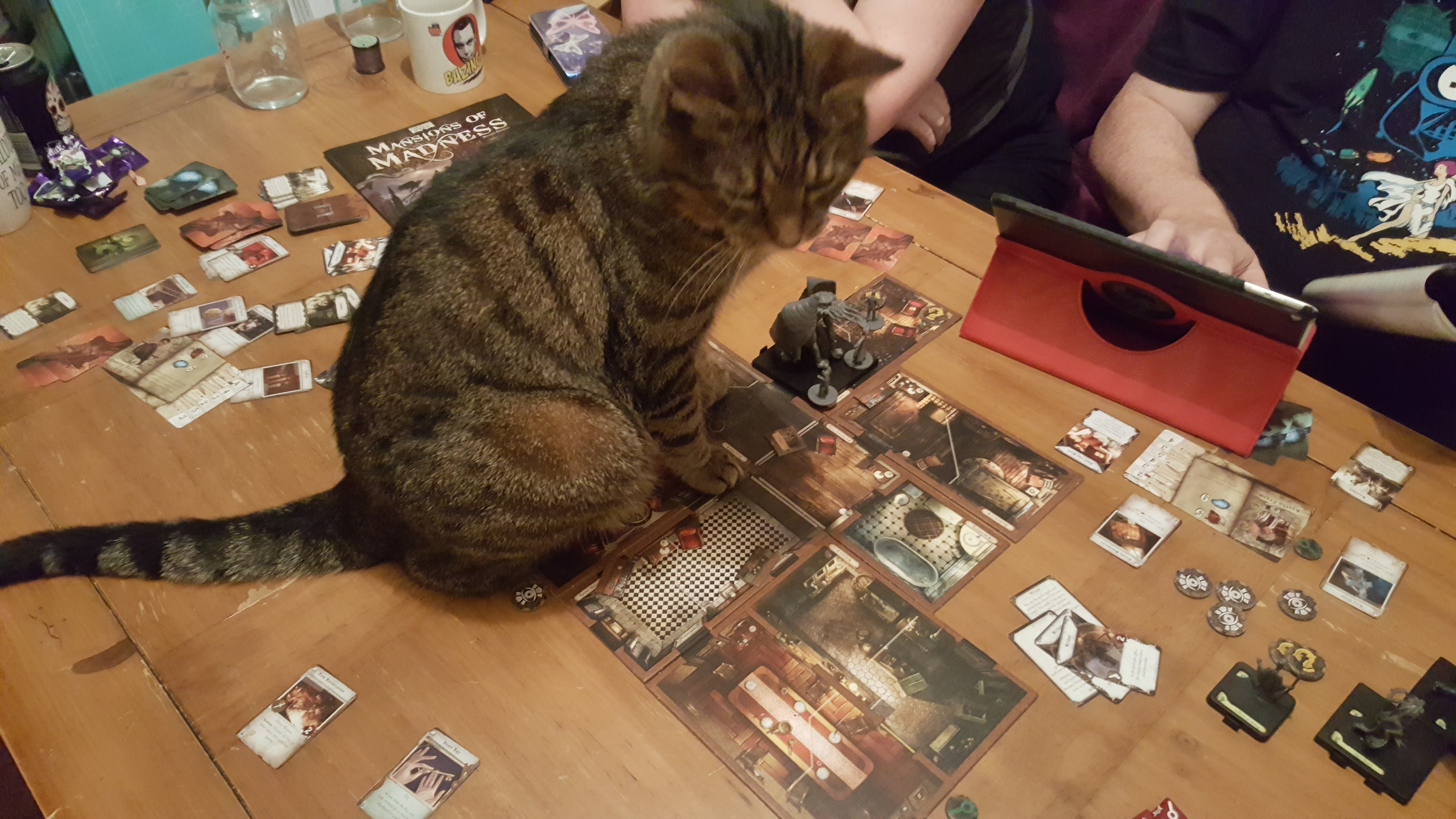 Hello everyone, welcome.  Today I am going to be recounting a recent game of Mansions of Madness that my friends and I played.  And, as you will note from the picture above, our host’s cat decided he wanted to play too.  It is perhaps nearly fitting that the moggy in question is called Bastet, which I am aware is an Egyptian God and not a Great Old One (though someone did kindly take the time to point this out to me on twitter – I know, I was making a joke), but it still feels kinda appropriate.

So, onto Mansions of Madness.  Just a bit of context, Mansions of Madness is another one of those pretty Fantasy Flight games with a lot of cards and tokens, set in the universe of Lovecraftian Mythos, a Universe that spawned Call of C’Thulhu.  Players take the roles of 1920s Investigators situated in a fictional part of the State of Maine in the United States.  The Game has players exploring a Mansion, looking for clues to try and find out what sinister plot is afoot whilst hopefully also being in time to stop it.  This particular version of the game is the Second Edition, which is arguably streets ahead of the first edition as an intuitive App runs the game without requiring a Dungeon Master, and builds the Mansion as you explore which significantly reduces setup time  (1st edition you set up the whole mansion and every token…I never played that version, I am relieved to say).

We each chose investigators from the stack available.  Our cast included:

A priest with a tendency to open too many doors (Bad in a mythos game.  Probably also necessary)

An Athlete who turned out to be our best fighter

As one of the players took the Rich Guy, I adopted him as my lord so that I could run around sorting things out for him and generally have a comedic effect.  As he was given the Candles as starting equipment, when I was given a fire extinguisher I found the image of me following him around putting out fires he had accidentally set to be quite amusing.  We started the game.

The app ran some spooky music and a voice actor, whose name is unknown to me but whose voice I recognised from a BBC Radio 4 dramatisation of Shadows over Innsmouth, introduced us to the scenario.  We were investigating some missing people in the vicinity of a Mansion, and the owner of the house had been singularly uncommunicative with our messages.  Then, we got a frantic phone call begging us for help and that we come over right away!  So, we did.  Game Start!

We entered the hall to hear clattering in the kitchen (to our right, not set up as the door was closed – I was very close to running in to clean up the mess the obviously incompetent servants had left…), which drew the attention of our Priest, Parapsychologist and Athlete.  My adopted Lord and I decided to investigate a spooky painting in the hallway, whilst they foolishly opened the door to said kitchen.  There were shadowy figures in the painting and my Butler noted the stars in the painting matched the constellations outside.  This was a clue.  Meanwhile in the kitchen…

We found a cowering butler (source of the phonecall) and a winged monster in the Kitchen.  Under the circumstances the pots and pans strewn everywhere was perfectly reasonable, but I’d still fire that butler and made a note to recommend such to his master.

As fortune would have it our Athlete was actually particularly competent at combat (no one else was…) and with her assault on the creature, backed up by the other characters, the creature fell fairly quickly.  What was interesting was the App varies the combat depending on what creature it was, what it has previously done and takes into consideration how many times it has been attacked.  So, for a flying snake, you might have to attack using strength…or maybe it’ll be dexterity.  And if you are the third attacker on the turn, it is easier to hit and wound if it is already taken a serious pounding.  We cleared the kitchen and found clues detailing that there was something going on in the yard, and the key to the door was in a puzzle box in the owner’s bedroom.

We immediately ventured further into the Mansion, me daringly heading to the owner’s bedroom as a good little servant.  However, Joe, who was playing the Priest, was feeling a bit chaotic on the night in question and decided to start opening doors, necessitating a split in the party so we could deal with whatever we found in the new locations.  He wasn’t even insane yet.

That would be a cultist in the lounge.  And  party split over 5 rooms.  This is not necessarily when things started to go wrong, but possibly foreshadowing of what was to come.  Fortunately, cultists are relatively squishy and we were able to deal with it.  I say we, I was busy ransacking a bedroom whilst my adopted lord was breaking into the cabinet in the toilet.  The Loo Roll I imagined he would find would possibly come in handy later when terror affected us.

I found the puzzle in the Bedroom, whilst another puzzle was located in the Lounge.  Another really cool feature of the app is that the puzzles are controlled on it, whereas in first edition you had to make them up with tokens or something (I believe).  They puzzles were basically combinations.  Mine was already solved as a result of previous investigations, others took a few attempts.  It did add to the challenge as it wasn’t just a dice roll.

As a result of investigations we also learned the door we needed to open was alarmed and the means to shut it off was in the library.  We found the library with an unusually soggy occupant.

We encountered a Deep One, one of the Fishy creatures in Shadows over Innsmouth.  It was quite a bit tougher than a cultist and just a bit scarier.  We were getting much closer to having party members fall to insanity.  The Deep One was defeated, just. And I think our first investigator did fall to insanity, so let us explore that mechanic a bit.

Investigators have two attributes.  Health and Sanity.  Lose all your health and you gain a wound.  (Lose it a second time and you die).  Lose all your sanity and you gain an Insanity card (Lose it all again and you die).  However, where wounds are inconvenient, Insanity can in fact change the allegiance of a player by giving them new victory conditions that are contrary to the rest of the party.  I am told pyromania is one of these conditions, which I can well believe as it happened at the Live RPG Plus Show that I attended earlier this year, where we got to see a British Cabinet Minister lose the remainder of their marbles and set fire to an oil rig.

Of course, things were about to get worse…

Bastet, the home owner’s cat decided he wanted to play too.  Either that or he just wanted some attention (he has become much friendlier over the years), and as suched jumped on to the table any number of times.  Fortunately he neither hurt himself on miniatures nor broke anything, so all was well.  It was just a tiny bit distracting.  But if that is the worst thing that happens in a Cthulhu type game, then all is well.  Of course, it wasn’t.

We managed to get into the Yard to try and stop what turned out to be a ritual by a Deep One Cult, trying to open a portal to one of the other Lovecraftian Realms.  That was when the first Star Spawn arrived to say to us, no.  The Deep Ones were tough.  The Star Spawn…there was no chance we were killing it.  We simply had to fight it and hold it until we could stop the ritual.  Adding to the complexity, the High Priest of the Deep Ones was, of course, the Mansion Owner.  And he was quite tough too, but him we got.  I provided valuable rear guard whilst the other party members tried to thwart the ritual.  This was complicated by a second Star Spawn and a fiendishly difficult puzzle.  And by this point three of five investigators were insane (Including me, though my victory condition hadn’t changed).

The House started collapsing in on itself, however the portal was closed and the ritual stopped.  I was killed in the process, which we later determined technically meant we lost the game.  However, I was the only fatality so the group that still had “Complete the Investigation” victory conditions counted it as a technical victory.  And an actual defeat.

This was a fun game, despite frequent intervention from our benevolent Egyptian Great Old One.

I am really glad we didn’t play first edition.  Given what I know about it, whilst I imagine it would be just as fun, setup and takedown would be brutal.