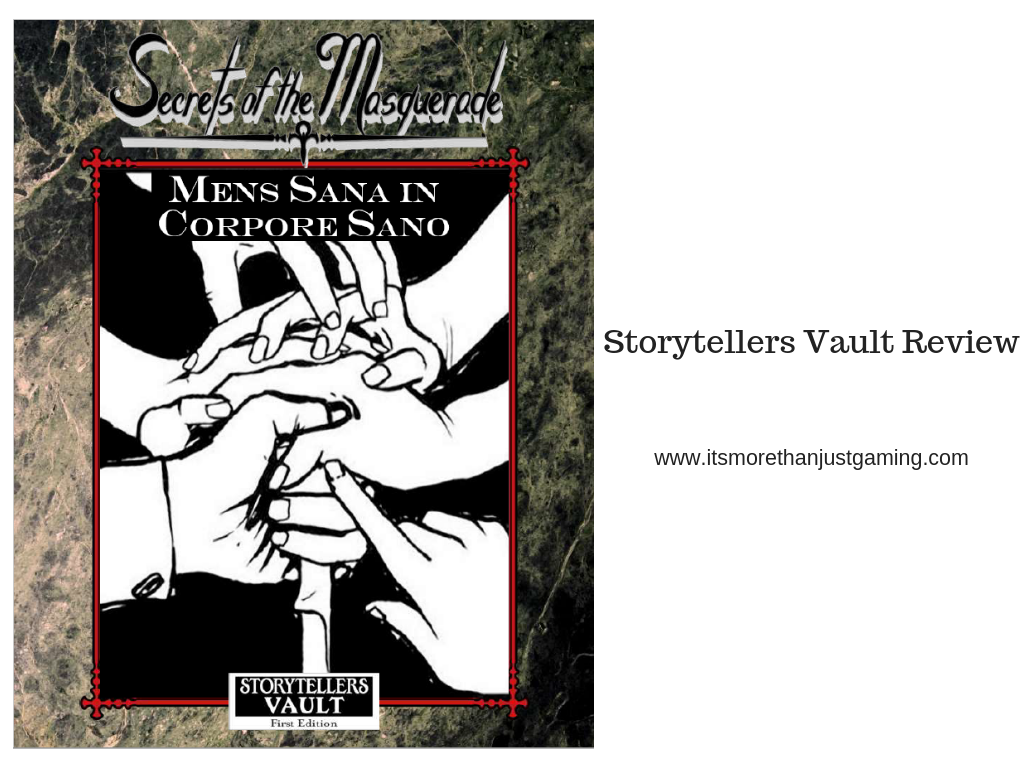 Hello everyone, welcome.  Today I am reviewing another product by the folks who do the Secrets of the Masquerade line of Sourcebooks for Vampire: The Masquerade  on the Storytellers Vault.  This time, instead of a player or storyteller guide we are looking at a scenario book  Mens Sana in Corpore Sano.

Mens Sana in Corpore Sano is a short scenario book designed with a coterie of young premade vampires in mind, set in a Belgian City.  The coterie finds that the world seems to be out to get them as various bad things happen to them and anyone who knows them, all the while an unknown benefactor sends them aid and information.  The players will realise that the mystery of what is happening to them is tied to the past of one of them, and they will have to go digging to find answers.  Before they are crushed beneath the boots of an unfeeling world.

All that being said, various details about the setting of Mens Sana in Corpore Sano  are kept deliberately vague in order that this scenario be run in any city, or even slotted into an existing chronicle.  In fact many of the details of how to run the scenario are also left vague so that Storytellers can make it fit their style.

The concept, that is what is happening to the players, and backstory is really compelling.  If there is a chance you will play this scenario, don’t read it it!  It’ll spoil the fun, as at its core it is a mystery to solve.

A good mystery needs good clues and there are plenty of events that are described, things that have happened in the past that players can unearth as well as the sorts of people that the players can speak to that can give them more information.

There are plenty of suggestions of locations that the players can investigate.

The human NPCs suggested as contacts or clues are pretty well fleshed out.  A Storyteller can certainly add more, but there is enough to be going on with.

There is a helpful suggestion early on, given that this scenario is about personal horror, that it doesn’t hurt for players to have cards to show to let the Storyteller Know something that is happening in story is making them uncomfortable.  And that such discomfort should be dealt with respectfully and empathetically.

There is a note within the Storytellers Vault Page to say that whilst this is intended as 1st edition, it can be used with any edition of Vampire: The Masqerade and that maps and other V20 content will be added later.

I should preface this section by saying that I personally didn’t find any problem with any of the following, but I realise it might be less appealing to some Storytellers.

This is not an off the shelf adventure.  Some assembly is required.  The main antagonists have enough detail to be run as is, however there is no suggested timeline.  This supplement is a toolkit for a sandbox game and it requires some thought and effort by the Storyteller to get things going, particularly if you choose to create original characters.  I don’t have an issue with this, the product itself does not sell itself as an off the shelf jumpstart.  Only as a scenario.

The kindred of the city, again, are left vague and incomplete.  Again, I had no issue with this.  The premise that they are disinterested in the actions of the coterie works quite well, and the vagueness allows any NPC to fill any given role.

There is no by the book, pre-written, finale/denouement.  You’ll have to come up with your own.

I really didn’t have a lot to say about Mens Sana in Corpore Sano.  It was a thoroughly enjoyable read, and an excellent scenario.  Would I use this scenario?  Yes, I think it would make a really excellent short for a small dedicated group of mature roleplayers.  I recommend.

All links beyond this point are Tag Free.