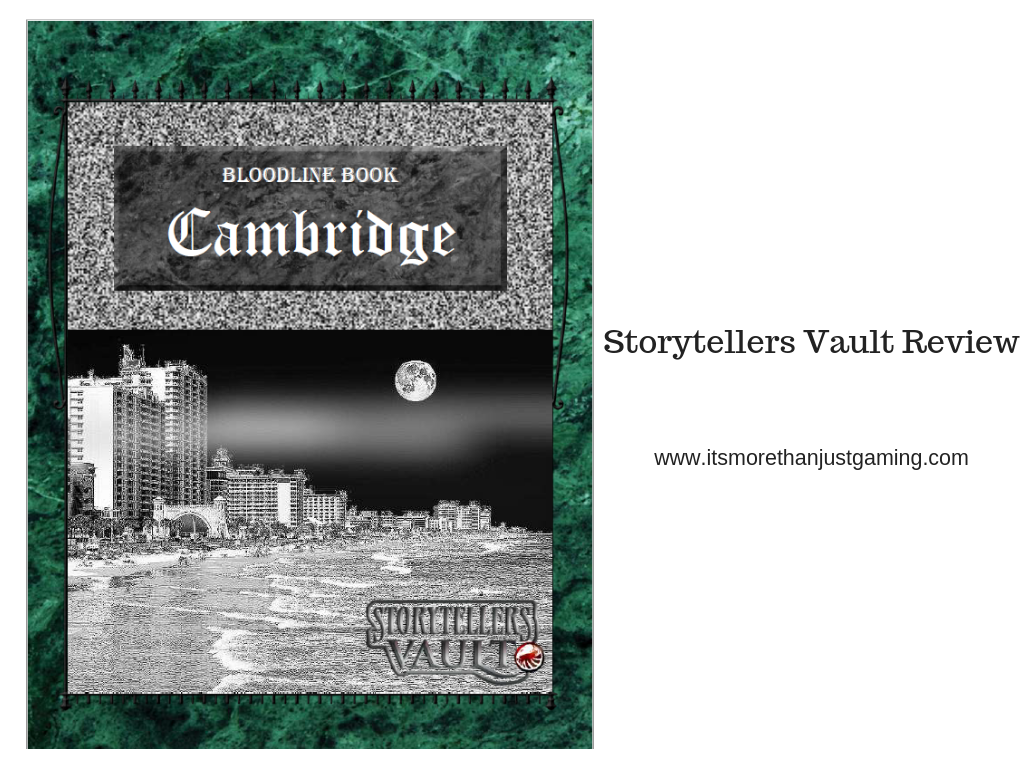 Hello everyone, welcome.  Today I am going to be taking a peak inside the Storytellers Vault product Bloodline Book: Cambridge for Vampire: The Masquerade.

One of the great things about Vampire: The Masquerade and its associated game lines is the volume of unusual antagonists.  Sure, you have warring sects that everyone who has played the game for more than a few sessions knows about, murderous lupines stalking the countryside and even bizarre changelings with their unknowable motives interfering with prized territory.  What is hard to keep in your head is every single rare bloodline of Vampire, their unique perspective and their unique powerset.  The Storytellers Vault is filled with new Bloodline Books and Bloodline Book : Cambridge is one of these titles.

With mysterious origins somewhere in the Anglo Saxon Dark Ages, the Cambridge Bloodline is a bloodline that embraces exclusively within the family and only from their identical twins.  As a rite of passage harking back to the tragic formation of their bloodline (which I won’t spoil here.  Nor will I tell you which legendary figures feature in their creation…) one twin is embraced and the other becomes a ghoul bonded to the vampire.  The purpose of the ghoul is to be their sister’s keeper, to make sure that they never stray far from humanity into the excess of the beast.  (The lore as written states only female Cambridges exist as there have been no male identical twins born as yet.  There is no exclusion, it simply hasn’t happened…or maybe there is?  Storyteller decides)

The creation of the bloodline was dark, and tragic and that motivates the surviving twins to take an outsider’s view of vampire society, and work to curb its excess.  The Cambridge bloodline is not referred to as Humanitarians for nothing!

This product is short but has a lot of information about bloodline motivations, practices and even things that they have been involved in.  Some of these things have been pretty big in terms of Vampire: The Masquerade meta plot, others are just well known ghost stories.  Both of which is quite cool as far as I am concerned.

There are a couple of clan discipline techniques as well as a unique hedge magic numina for the ghoul twin.

This is a well made product.  The layout is professional and it reads almost like a canonical sourcebook.

The concept of identical twins, one embraced and one ghouled was really interesting.

The bloodline’s humanitarian outlook, and command of resources make it well suited to show up in any given story as allies of the players.  Or as an enemy, which may well have the interesting twist of putting the players into the position of asking themselves, “Are we the baddies?”

I noted above that the bloodline traces its roots to the Dark Age Period, more specifically the time that the Angles, Saxons and Jutes invaded what is now England.  Aside from anything else I am deeply interested in this time period, however of relevance and hopefully of interest to other players is the mysterious figure who appears and gives aid to the first Cambridge twins in exchange for a bargain.  If you look closely at the names, and their story (such as it is) you will note a really cool tie in that has a lot of potential to expand the Cambridge story in your game.

I really don’t have an awful lot to say here.  I was surprised by one of the in clan discipline choices, temporis, as I always assumed that to be rare as Rocking Horse Poop, but I don’t think it is game breaking.  For a start, there really can’t be more than a dozen or so members of the bloodline at most, given their exclusive selection process.  Their clan weakness is also pretty solid counter balancing this power anyway.  (And reading the descriptions of the discipline techniques, I do understand why it was included).

Some purist historians may find their brain rebelling against anglicised/modernised names/naming conventions (it didn’t actually bother me.  Running a chronicle in dark ages is hard when you are limited to anglo-saxon names and players veer of track and you need to invent an NPC.  There are only so many Aethelwulfs in the world…).

So, my test.  Would I use Bloodline Book: Cambridge?  Yes.  Most definitely.  I don’t think I would allow a player to choose the bloodline unless it happened to be a specifically Cambridge Game, or unless they came up with a phenomenal backstory.  (I wouldn’t allow it as a playable clan simply because someone wants Temporis and Thaumaturgy, which is time manipulation and blood magic if you didn’t already know).  I think a Cambridge pair would make an excellent adversary, possibly not a main antagonist and possibly an adversary that could be converted to ally prior to the climax of the campaign.  I think they would also make useful shadowy benefactors for hunters, maybe even werewolves as well.  And, there is so much potential with their backstory.  To date, I would have to say, this is probably my favourite bloodline book on the ST Vault, and in all honesty, I enjoyed it more than much of the canonical source book Lore of the Bloodlines.  I recommend.

Click on the following link to purchase Bloodline Book: Cambridge