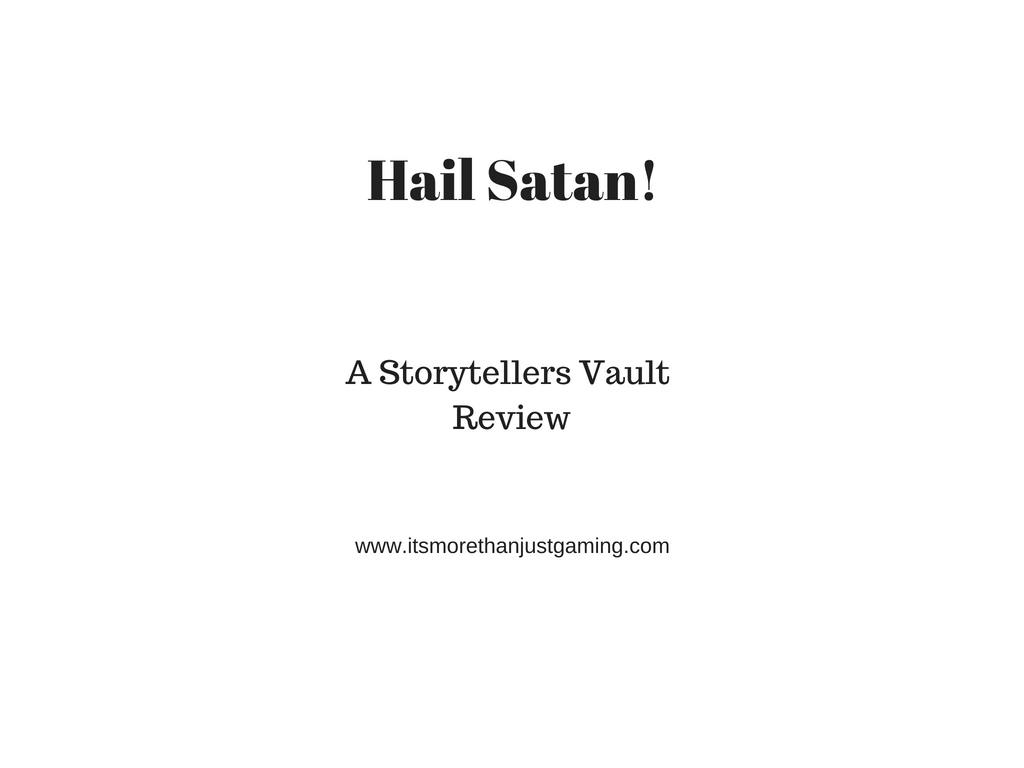 Hello everyone, welcome.  Today I am doing another review for a Storytellers Vault product called Hail Satan.

One final disclaimer, I will be referencing the content from within this product.  Some of the content is of a very dark nature and some folks might find some of the subjects covered to be quite upsetting.  If this might refer to you, then this might not be the product for you and I would suggest not reading further.

Hail Satan is a fairly short product that might be considered a chronicle starter kit, or more likely a one off short campaign over three or four sessions.  The reason I say it is more likely to be for a short one off, rather than as a starting point for something wider is that the entire premise of Hail Satan is that the players take the role of recently embraced Baali Vampires.  (This Storytellers Vault Product uses the Black Dog templates rather than the White Wolf.  Black Dog was for the darker products in a dark game line…).  And if you are unfamiliar with Baali, they are infernalist vampires created long ago by some unknown progenitor (there are a number of theories that are quite interesting, but truthfully I don’t know if any were ever confirmed).  They are the bogeymen of Vampire: The Masquerade.  Unless you play a Nosferatu (like I tend to).  In which case, you have a set of bogeymen all to your self…

The Premise is simple.  The players have been embraced by a Baali, Tekla.  The reason for their embrace is not quite clear, other than Tekla felt like abusing a bunch of fledgling vampires, that were then tossed aside to die after suffering unmentionable (and unmentioned) tortures at her hands.  The Players, however, have an unlikely patron.  A Demon that has had Dealings with Tekla has made a bet with the players (I feel this should actually be a deal).  The Players must kill Tekla for him as she has screwed him in a deal, otherwise he is going to destroy the players.  This all happens prior to scenario start.

The scenario is essentially a road adventure/horror whereby the players track down Tekla, who has inconveniently been split into three parts, in her lairs(s) and kill her.  Each lair has a different feel and a different cast of twisted defenders that pose obstacles for the players.  The lairs were a Convent/Coven, Satanic Summer Camp and the Motel that everyone forgot.  The Motel was far and away the most interesting of the three, the other two being interesting but too heavily reliant on tropes and shock value.

The Scenario has a list of suggested encounters that players can have as they track Tekla.  They never need to worry about finding her, the Demon provided means to track her unerringly.  The encounters reinforce the rural peril of a vampire road trip and could pose the players some interesting encounters.

As I noted above, the Motel Lair is quite interesting.  The guests range from creepy, to weird to shocking and I think it would be fun running the encounter.

The list of encounters was interesting and could serve as fodder for any vampire game where players are required to travel through the countryside.  (They would work for other games too with minor adaption)

One of my favourite graphic novels is a Ghost Rider compilation where Johnny Blaze/Ghost Rider starts out in hell, and breaks out, though this is a trick by the Devil so he can get out too.  Ghost Rider spends quite a few issues hunting down the 666 fragments of the Devil’s essence in order to set things right.  Reading this product, I felt that if I was to play or run this story it would almost feel like playing that Ghost Rider story.  But as a Vampire.  Probably an evil one.

The players get to choose their mode of transport from a list.  The haunted camper van was my favourite.

There were a couple of things that bothered me about this product which were a bit weaker.  The first was the grammar. I don’t get too hung up about it as the product is still clear and readable, but if you are selling something then I expect a bit more.  As I say, it is readable and the meaning is still clear.

There was far too much swearing in the text.  There was no good reason for this and I felt it distracted from the product.  Case in point, the name of the coterie the players form, the M#ther*u#kers actually grew on me as I read into its deeper meaning.  I missed this the first time round as there was so much swearing I had started to dismiss it.

The product has stuff in it that a lot of readers might find upsetting, (Abuse of children, reference to sexual assault) and if you are unaware that the Black Dog symbol means very dark material it can creep up on you as it is in the setup text as well as the encounters.  I have contacted the author and suggested that an explicit content advisory would help people make an informed choice before buying, thus hopefully preventing someone reading something that upsets them.

There are a lot of ideas in this product but as I noted above, it is a short one which ultimately means that these ideas are never fully developped.    Neither Tekla, nor the Demon, have any background so this reduces them to little more than plot devices, one to get things moving and the other to simply kill at the end of the story.  This is a shame as I would have liked to know a bit more about both, which would then make it easier to roleplay the Demon Deal scene (not explicitly in the scenario, but I think it works better that way) and even do a number of flashback scenes where players are still with Tekla.  An experienced storyteller could still do these things, there are plenty opportunities for such but if I am playing a premade scenario, I would prefer not to have to create the villain’s backstory.

My last point could be taken a number of ways.  Aside from a Demon trafficking in souls, there wasn’t a whole lot about this product that screamed Baali.  Psychotic Vampire, yes.  Baali, not necessarily.  This scenario would work equally well if Tekla was a standard clan that had embraced a bunch of fledglings, and screwed the local elder in some deal.  This isn’t necessarily bad as if you want Baali, a storyteller can dress up the scenario with their own knowledge.  And if you don’t want Baali, this would work quite well as a chronicle starter for a group of vampires all of the same bloodline (or different ones if you use a bit of imagination)

Acid test.  Would I use this?  Yes, sort of.  I don’t necessarily think I would run the story as is, though that is because I don’t tend to run villain/anti-hero stories (Vampires are villainous enough without starting them on a blatantly evil path – however that is just me, I am aware that folks play these games and I daresay for them they are fun).  However, there are a lot of suggested encounters (even if they are only 1 line and lacking character sheets/details) that I could add to  catalogue of “random” encounters.  As I noted above, I liked the Motel Lair and I can actually see that as a random encounter on a Vampire road trip, or even the end of a short chronicle by itself.  The product is not very expensive, so it is worth a look if any of the above appeals to you, and if ultimately you don’t like it, you’ve not lost much in time or money.  Worth a look.

Hail Satan is available from the Storytellers Vault (This Hyperlink has no tags).