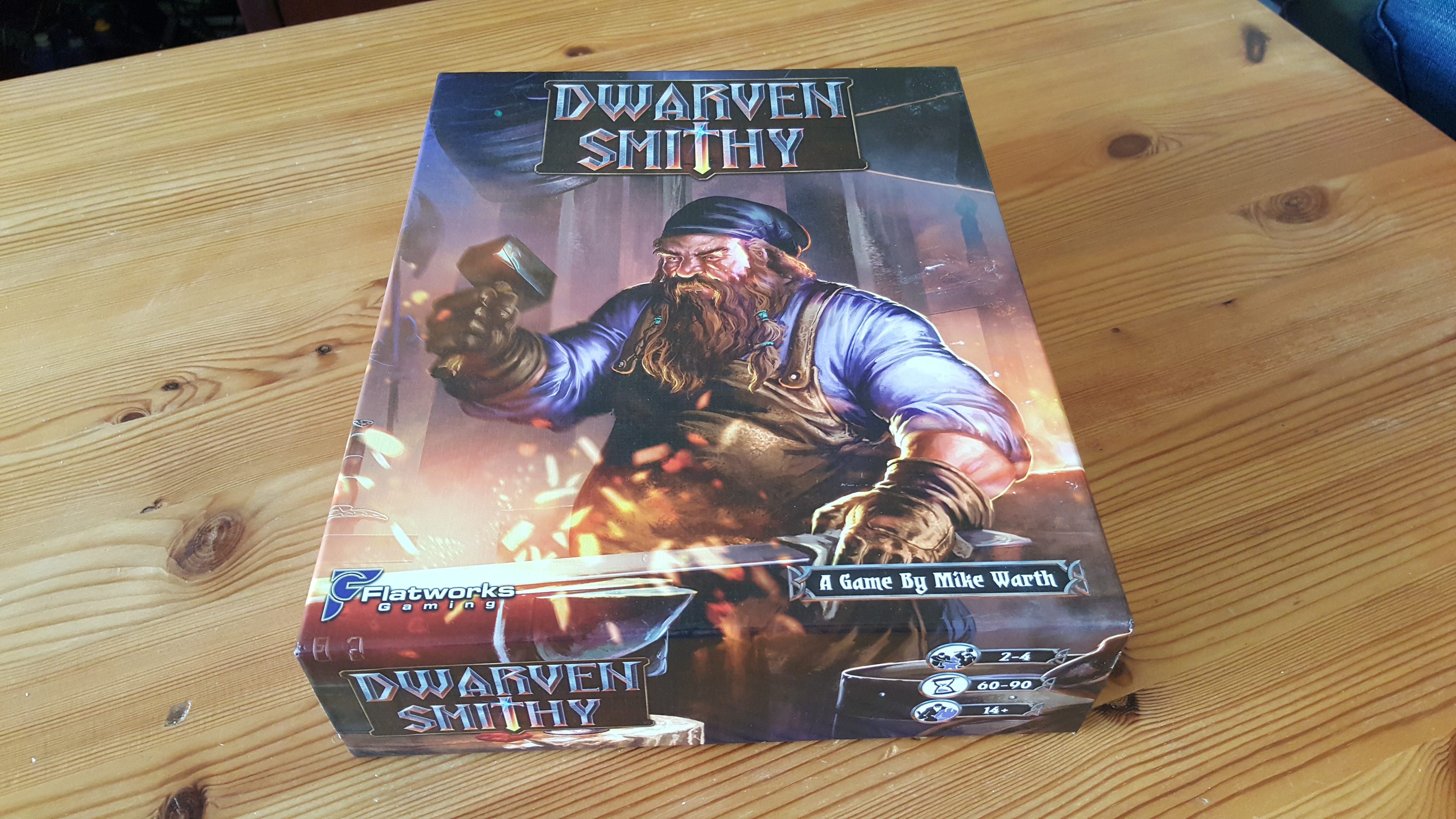 Hello everyone, welcome.  Today I am going to talk about the game Dwarven Smithy.  Dwarven Smithy is a card game that my friend, Pete, Kickstarted and received recently.  To be honest it was a surprise to learn that he kickstarted things at all as he doesn’t tend to talk about it so much, however it was no surprise to find out that one of the games he backed was about Dwarves.  He likes dwarves.

Dwarven Smithy is a competitive card game where players take the roles of Dwarven smiths each vying to make the most money from the best items.  Each turn a player can play raw materials from their hand into their workshop, use refined materials to build items for sale, sell raw materials and then draw their hand back up to 6 cards with either mine cards ( raw materials) or guild cards (recipes).  The game ends when one player has filled their personal marketplace with King’s Items (Basically, the highest quality armour, tools, weapons etc).

So, on my first turn I played a Silver, a Gold and two Irons from my hand into my workshop area.  They are played upside down to signify they are unrefined.  On subsequent turns they are turned right side up to show that they have been through the workshop, are now refined and ready for use in manufacture.  This was a really cool little mechanic, which is coupled with the fact you only have 7 slots in your workshop.  If you have used them all, you cant add anything else.  You can store things in your marketplace, above your dwarf which is an additional four spaces of storage.

So, in the preceding image I have manufactured myself a pair of tongs which which help with future production, I have a King’s Item (the Workshop item on the left) in production, a silver and two gems in my workshop.  I had to store an Iron and a Gold in my market.  The danger here is that when they are in your market, then any player is free to buy them.  The game I played was only two player, so it wasn’t to intense in that respect.  However, there are finite resources in the mine.  Resources can be sold to the warehouse (which puts them generally available for sale.  Anyone can do this, but it earns less money than if a player buys) and resources used in manufacture are discarded.  This means that in larger games, competition for resources becomes fierce, making the market a risky place to store.  It is quite conceivable that players try and block other players by buying all the materials they can.

Of course, that is a risky proposition in itself as you have finite workshop space and finite handspace.  If the stuff you are buying to block someone isn’t instantly useful then it becomes a detriment by taking up space.  Of course, if there is a refined piece of silver and you happen to need one, then spending a few coins rather than playing something unrefined from your hand might speed things along, gain you an item and deny resources to your opponents.

Over the course of the game, you can build tools (up to 2) and recruit apprentices (up to 2).  Each tool and apprentice makes things just a bit easier to manufacture.  By the end of the game, I had one of each.  A tool that negated the need for gems on several item types, and an apprentice that increased my hand size.

I had one King’s Item out, whilst Pete had 4.  Unfortunately there is an element of luck in the game.  I started with one King’s item recipe in my hand.  Pete drew 4 in his first couple of turns.  I drew none for the rest of the game.  He was then able to make some tools which made manufacture of his King’s Items very easy which ended the game after about 40 minutes.  He won, by a long way, but I still enjoyed the game.  I think the cards needed a bit more shuffling perhaps but stuff like that is going to happen from time to time in any game that has any chance element to it.  The fact of the matter is, you could build your hand each turn deciding whether or not you were going to take Mine cards or Guild Cards, which takes an element of chance out and restores a bit of thinking.

This game was fun, quick and a bit different from the games I normally play.  But not too different that I couldn’t grasp it quickly.  I think this is one for a gamesnight with three or four folks alongside with some other hourlong games.  My thumbs up.

4 thoughts on “Dwarven Smithy – A Game of Smithing, and Dwarves.”