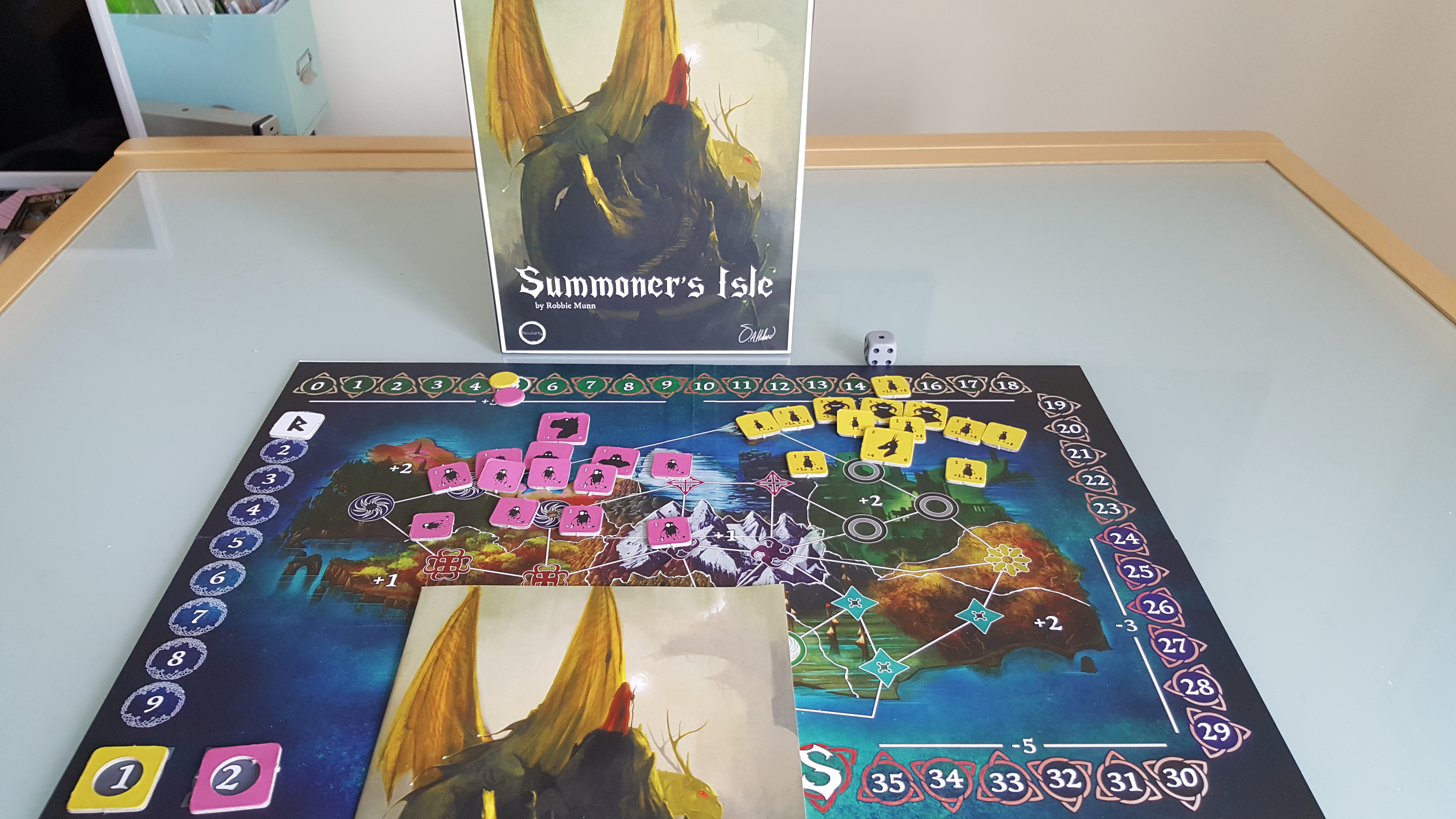 Hello Everyone, Welcome.  Today I am doing a quick preview of an up and coming game called Summoner’s Isle that is coming to Kickstarter this September.  The developer, Robbie Munn, kindly loaned me a copy for review (and has been very patient with me as I have been slow to get to it).  So, lets get to it.

The basic premise of Summoner’s Isle is that 2 to 4 players are untrained Adepts all vying for the position and status of Summoner, the Guardians of their Homeland.  In order to do this they are sent to the Island of Thule to gain mastery over their summoned creatures, mastery of combat and mastery over absorption of spirit energy, or so goes the description on the box.

The Game is really straightforward.  Each player starts with five energy and has a pool of creatures tokens, consisting of 9 sprites, 3 trolls and 1 Wyrm, that are available for summoning in game.

Water, Metal, Earth and Forest creatures are colour coded for your convenience, but are otherwise functionally identical.  Order of play in turn 1 is up to the players.  In subsequent turns, it changes to player with lowest energy at the end of the preceding turn to highest.  A journey rune is placed on the first turn, which is used to keep track of the progress of the game.  Players win by either getting to 36 energy, or having the most energy by the end of turn 9.  However, only victory by acquiring 36 energy grants the winner Summoner Status.  The other victory is more of a victory by default and is thus less satisfying, thematically.

You summon creatures to the board which expends energy.  You can then take it in turns to activate creatures, seizing territory and fighting other creatures.  You gain energy for defeating creatures, holding a full territory with no opponents in it and the Sprite Creatures also have an energy builder type ability.  At the end of the turn you gain (or lose) energy depending on how much you have.  If you have little, you gain a fair bit.  If you have a lot, you lose some of it.  I quite like this, the idea of energy sort of balancing itself out a bit.  Another way to look at it, if you are cramming lots of energy into a vessel (the adept) then some is going to spill out whereas if the vessel is empty it is easier to fill.  So it makes a nice sort of thematic sense.

Combat is very simple, requiring a single dice roll (unless Sprites are involved) and then adding combat bonuses to compare with the creature defence stat.  If you win, the enemy creature is destroyed yielding the attacker some energy.  And this is repeated until the game ends.

This game is very straightforward in its mechanics and plays pretty quickly, so is ideal if you only have an hour or so.

The core of this game is energy management, getting enough to get you into position to take victory on a subsequent turn without losing too much in the end phase of the game due to volume.  It is about placing your pieces strategically whilst preventing your opponent from doing the same.  I think this sort of game will work really well for loads of groups and I would even suggest that it isn’t a bad tool for education, specifically in terms of mathematics.  But if you need more than that, it is straightforward energy management fun.

As I said that the start of this post, the Kickstarter is expected out early September, however you can follow progress now on Summoner’s Isle social media.

All the best, until next time!