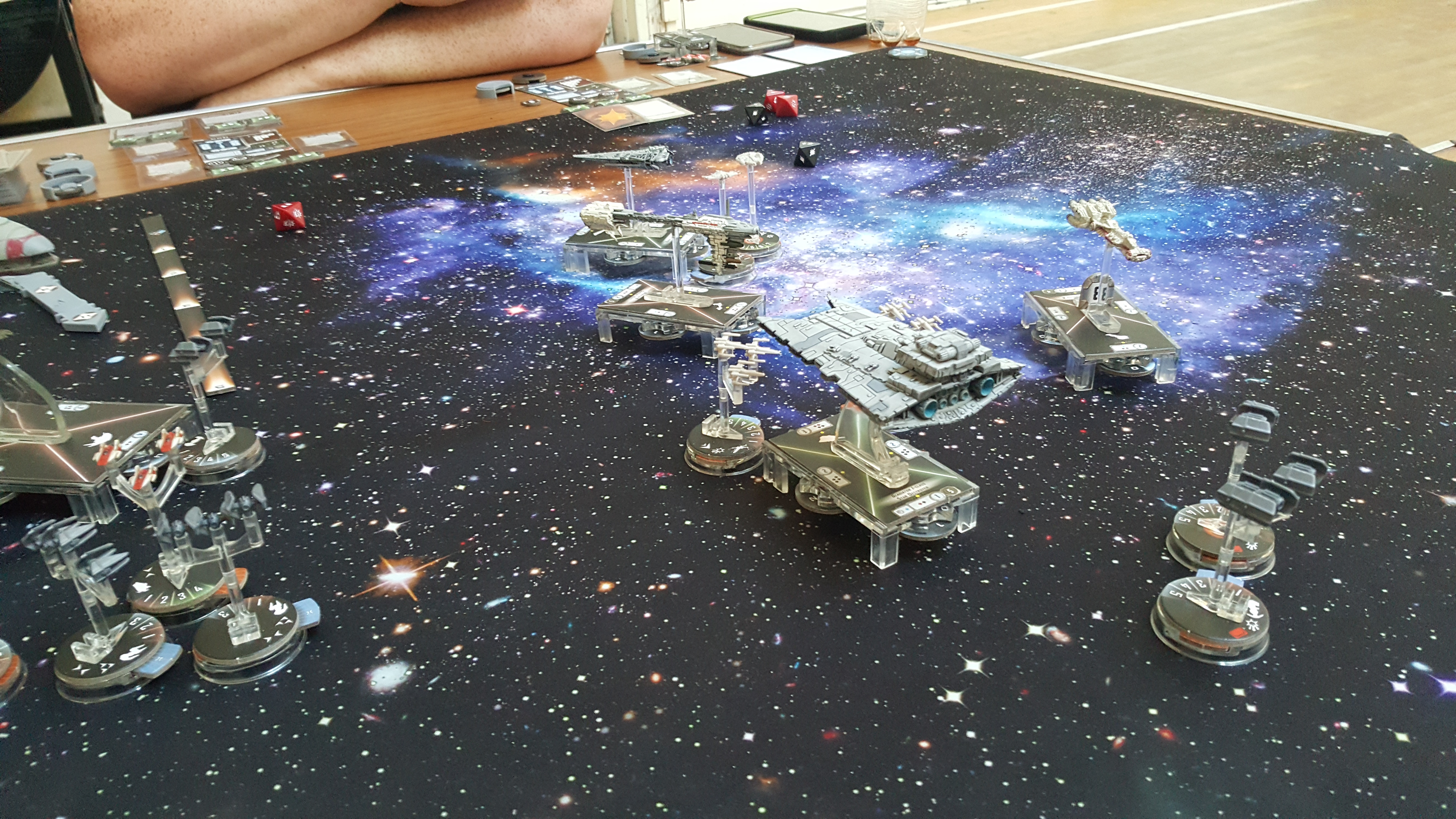 Hello everyone, welcome.  A couple of weeks back, my friends and I had a large game of Star Wars Armada, where I took command of the Star Destroyer Relentless.  The game was an Imperial Victory, which you can read about in my post, The Ambush of the Relentless, however myself and one of the Rebel Players, Stuart, came away slightly dissatisfied.  We were wanting a straight fight and neither of us were really prepared for the ambush scenario.  So we agreed to a rematch a week later. The rematch was initially going to be a 300 point game, but it escalated to a 500 point game which I was more than happy with.  I decided I was going to field a Star Destroyer as a carrier, once again using Admiral Sloane to buff my fighter screen.  However, rather than fill up the rest of my points with more carrier type Star Destroyers I decided to field some smaller, more agile (and surprisingly heavy) ships.

For my flagship I chose the Imperial Star Destroyer 1, which is the cheapest and has carrying capacity for 2 Offensive retrofit upgrades.  This was desirable as I had 2 in mind to make it a better Carrier.  Given that Admiral Sloane’s ability allowed me to expend any defence tokens, and given that I had taken an Ion Cannon Overload Pulse, I chose Avenger as the most appropriate ship name.

In theory Sloane would help fighters chip away at enemy squadrons, whilst Goran would make my fighters more hazardous to attack whilst the Avenger itself would be able to tie up Rebel big ships.  However, whilst the Avenger was certainly what I considered to be my flagship, as part of my overall strategy it was simply something big and hard to kill that could tie up larger rebel vessels.  I wanted the centrepiece of my strategy to be my Gladiator Star Destroyer, the Demolisher.

The Demolisher was a Gladiator Star Destroyer seen in the 80s cartoon series, Droids (I hadn’t realised that).  Since Stuart has previously seen me flying Star Destroyers as Carrier Groups, I decided that I wanted something a little different to surprise him so I built the Demolisher as a Torpedo Destroyer.  Basically, it could fire before and after movement and as a result of its Assault Concussion missles it would do damage to adjacent hull areas unexpectedly.  I love the idea of hitting full on with my front battery then pulling alongside and hitting with a broadside (normally you must fire your weapons before moving but the name Demolisher allows to fire once after moving).

My next thing was to beef up my anti-starfighter cover.  Since new Star Wars doesn’t and probably will never have Imperial Lancer Frigates, I chose the next best thing.  An Imperial Raider, built to be an anti-fighter corvette.

The Imperial Raider is the fastest ship I have and so I gave it the officer card, Admiral Montferrat to make it harder to hit whilst moving at speed.  I mistakenly believed this also affected fighters, but I had misread the card and so that wasn’t actually the case.  However, I figured a corvette showing up amidst the enemy fighter screen and locking them down for a turn would be fun and surprising.  My final capital ship was my second Imperial Raider.  This one was built with a different payload in mind.

The Raider Impetuous was built to be another Torpedo Bomber, with a bit of anti-fighter thrown into the mix.  I have to say, on reflection this was probably my least useful ship in the game, possibly due to the fact that we were so far apart it was turn three before we engaged and partly because I didn’t use it properly.  Either way, it didn’t do a great job but I don’t dismiss it out of hand as I suspect if I had concentrated on it a bit more, it could have done the job.

Last, but not least, was my fighter screen.

3 Tie Advanced Squadrons and an Ace

and finally, 2 Tie Bomber Squadrons including an Ace.  Time to start!

The first couple of turns passed quickly as none of our ships got into range.  Avenger, Demolisher and the torpedo Raider advanced, the fighters following with them.  Avenger held the the left flank whilst Demolisher charged over towards the right where there were 2 Correllian corvettes and an Escort Frigate playing tag with my Raider.  Sneaking up behind Demolisher was Major Rhymer and the other Bomber Squadron.

On the left, the Avenger and fighter screen were up against the Rebel Assault Frigate Gallant Haven (the thing that looks like a technologically advanced flying potato).  Unbeknownst to me, Gallant Haven had a starfighter buff that reduced incoming damage to nearby squadrons by one, and there was a flight control team on board that gave allied starfighters additional combat dice for fighting.  End result, the Rebel Fighter screen was a lot tougher than I was expecting (The Rebels had a great strategy and I had some stinkers of dice rolls).  Admittedly, we discovered afterwards (via rules errata) that the Gallant Haven buff reduced damage to a minimum of 1 rather than 0 as had happened on any number of fighter attacks I had made.  End result the rebel screen was just a bit tougher to crack than it should have been.  There was no fault on the Rebel player, they played the rules as written on their cards, the errata was in the Star Wars Armada Wikki.  Lesson learned for next time.

Meanwhile on the right flank things were going my way a bit more.  My anti-fighter raider managed to fly into a rebel fighter formation annoying the Rebel Plans.  The Rebel player tried to get revenge by hammering Demolisher with long range fire and then flying straight towards me.  It could have worked too, flying into my forward arc limiting the damage I could do.  Except I was flying the Demolisher which unloaded its forward missile tubes and lasers into the approaching corvette, then danced nimbly alongside and hit it with a broadside.  This reduced the corvette to a cloud of debris scoring me the first capital ship kill.

On the left, my fighter attack against the Gallant Haven’s Fighter Screen continued to be thwarted by a valiant Rebel Defence, my only consolation being that I destroyed the rebel ace, Luke Skywalker after about 2 turns of trying.

The rebels managed to start piling damage onto my Raiders and their Escort Frigate tried hammering Demolisher at range.

Unfortunately for the frigate, it still a had to move after firing which brought it into weapons range of the Demolisher and accordingly was given a sound thrashing from the front batteries and broadsides.  With only one Corvette and a couple of X wings on the right flank remaining things were looking good.  And the Corvette had taken fire in an exchange with my Raider.  It managed to get past Demolisher but succumbed in the squadron phase when it got hit by a couple of Tie Bomber Squadrons.  Unfortunately, my largely ineffective torpedo raider also succumbed to mass fire from the Gallant Haven, whilst the anti-fighter raider was hit by a few rebel freighters being flown like gunships blowing it out of space.

Still I had two to one advantage in ships over Gallant Haven but my fighter assault had crumbled and Avenger was moving too fast to get a good bearing on the the Rebel Ship.  I was able to throw out one or two good volleys but they were at long range and not enough.  Demolisher closed with the Gallant Haven, and unfortunately met its match before being able to do anything significant.

In the final turn I did what I could to exchange fire with the surviving Rebel Ship, even getting some shots from my Tie Bombers before X Wings chewed them up.  We surveyed the field.  Rebel consensus was that I had more points on the table, but agreed with me it should be called a draw given rebel fighters still on the table.

The Demolisher/Ordnance combo was amazing.  I made a mistake in terms of bringing it too close to the Gallant Haven in an effort to bring more guns to bear.  I should have maneuvered it for an attack on a subsequent turn.

My Raiders did a good job but I don’t think I handled them as well as I could have, resulting in their loss and in the case of the Torpedo raider, loss without doing its job.

I moved my Star Destroyer at top speed to close with the rebels, unfortunately that meant I was moving too fast when I was in range and as a result, didn’t get a good bearing on the Rebel Ship.  I need to figure out how to slam the breaks on…

I don’t think my fighter tactics were flawed.  I think if we had known about the rules errata for Gallant Haven the fighter battle would have been less grueling, and I might have punched through.  I might not have.  All I can say was, it was a fun game and I think we re going to be playing again in the near future.