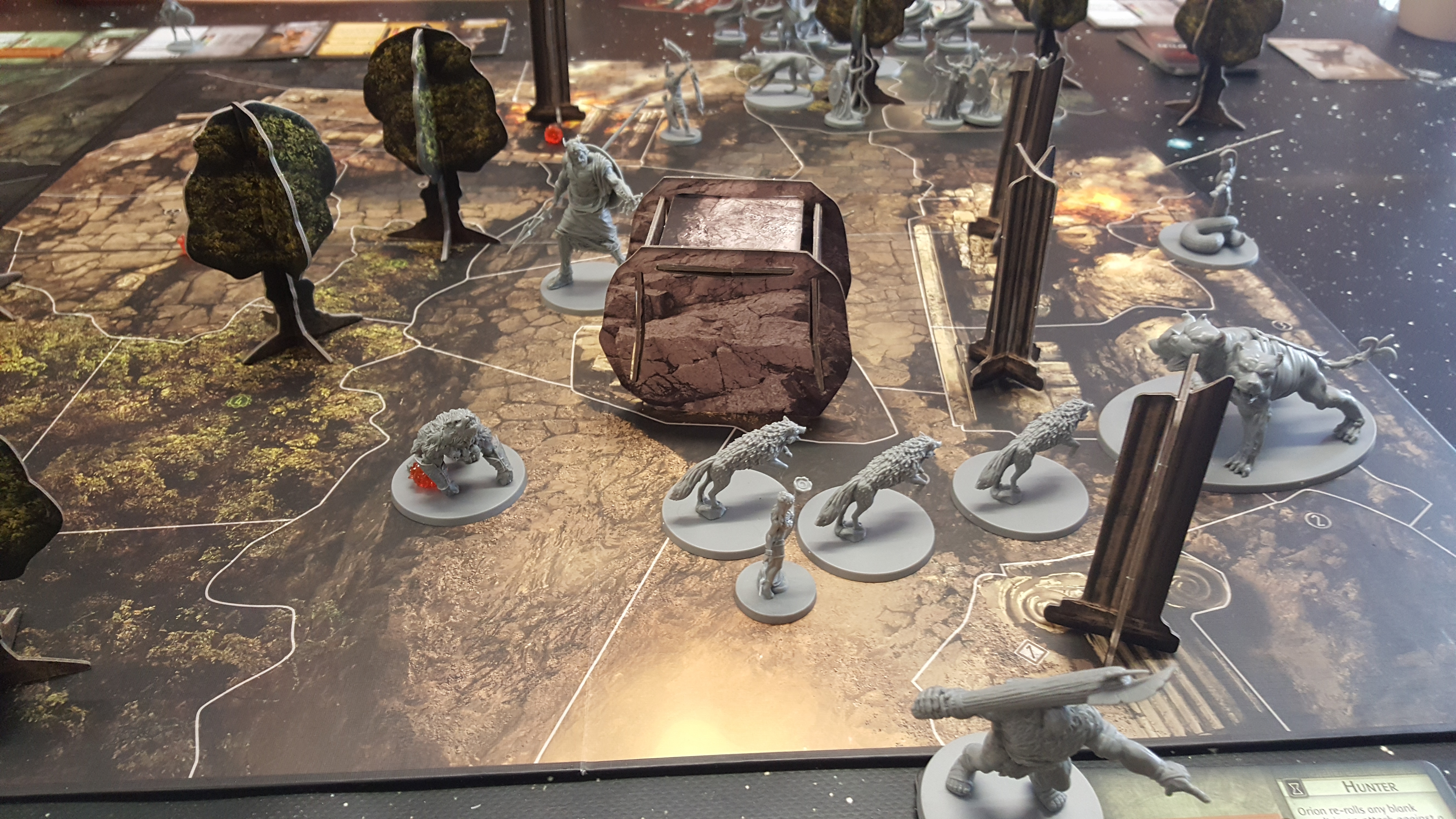 Hello everyone, welcome.  Today I am going to talk about a recent gaming experience with a game I had never played before; Mythic Battles Pantheon.  (Click on it for the Original Kickstarter from 2016).  Mythic Battles Pantheon is a Skirmish Game where players take on the role of Greek Gods, Heroes and Monsters.  I had heard about the game and was very much aware of it during funding, but decided that I couldn’t afford it at the time.  Besides, it was a a Skirmish game and whilst I have nothing against them, I don’t go out of my way to play them.  As fortune would have it, my friend (also called John) backed the basic pledge (which comes with about 112 miniatures ranging from basic troops to Olympians and includes 1 titan) and we played it at a gaming weekend celebrating his birthday.  We were supposed to be playing Star Wars Armada, as John had recently acquired a pretty extensive Rebel Fleet (John was the player who was closest to me in the game we played where I fielded the Star Destroyer Relentless which you can read about HERE) but as the gaming weekend was on his farm about an hour away, and I was already laden with clothes, sleeping bag, Lords of Hellas, Munchkin and Rising Sun (Munchkin almost being incidental to my load), I couldn’t manage my Imperial Fleet too.  To make a long story less long, we played Mythic Battles Pantheon instead.  Before I continue, I must apologise to one reader.   I have a reader who really seems to enjoy reading about these games and becomes conflicted as the games showcased are very pretty, meaning he wants to buy, and expensive, meaning he wonders if he should buy.  Sorry Michel!  Enjoy!  (You can check out his blog on Anime and Movie reviews HERE)

I am unsure if this game is available for retail (or ever will be).  Fortunately (or perhaps unfortunately?) the Pledge Manager for late pledges for version 1.5 of this game which Kickstarted June 2018 runs until the end of July, so if you want to pledge you can do so HERE, but you’ll need to be quick about it as you don’t have long.

Ok, on to the game.  The version of the game we played was basically a Draft version of the game.  Each player was allocated 13 points to spend and we went round the table choosing our Gods, Heroes, Monsters and Troops.  This added an element of randomness to our force as whilst a veteran player might know what works well with various things, other people might beat you to it.  From the image above you can see that for the commander/God of my force, I chose Athena.  No one at the table was surprised.  The other players took Zeus, Helios, Hades, Aphrodite and Artemis.

For those of you who have played before, I am not even sure if a six player game is legal in the rules but we decided “Screw the rules…”  We used two playing boards, 3 players on each and set up terrain and Omphalos tokens.  (Omphalos are the remains of dead gods.  The basic premise of the game is that Hera has gotten annoyed at Zeus again and freed the Titans, making the Gods mortal.  Several are dead already.  Collecting Omphalos, I think, helps restore divinity)

For my force my first hero I took was Circe.  I didn’t know if she was any good at this point, all I knew is she was a sorceress who turns people into animals.  She came with a unit of Circe’s Wolves for free.  I took Lycaon as my first monster.  Lycaon was a werewolf and I figured he would probably be a decent damage dealer and probably fast.  I then completed my force with a second monster, Orion.  I wanted Arachne as I thought that since Athena made her what she was, it seemed appropriate (Medusa was long gone by this point).  Unfortunately, the Aphrodite player picked Arachne and I couldn’t afford Echidna (Again, no idea what she did, I just liked the idea of an animal creating sorceress and the mother of monsters).  So I took Orion instead, who looked more like an Ogre than the hunter I was expecting.

I will do a brief explanation of how the rules were explained to me.  We know that we got several wrong and 5 of us were relying on the knowledge of the 6th and he hadn’t played for a while.  However we persevered and since we were consistent it didn’t unbalance the game. Each creature you draft has a number of activation cards.  You take all of them.  You then take a number of Art of War cards.  Each player starts with a set amount (we did 4, but after watching Beasts of War videos it might be 3) and some characters add Art of War cards too.  Athena, being a goddess of warfare adds three and I got one from Orion and Circe each.  I was informed this would be useful.  All of these cards made our Draw Deck.  We shuffled our decks and play started with us drawing our starting hands.

Each turn we drew one card and then we could activate units by playing their activation card from our hand.  Art of War cards allowed us to activate extra units or draw extra cards.  I am now aware that Art of War cards could do other things, but we didn’t know at the time so I won’t go into it here.  The turn started, our victory condition was to have our deity absorb 3 Omphalos.

My starting hand had no Athena cards so she couldn’t come onto the board.  Instead I was able to place Circe and Lycaon and that was it.  In subsequent turns, Circe’s Wolves came out which proved to be useful when the player nearest to me sent Cereberus to pick a fight.  I was able to use the wolves as a screening force whilst Lycaon played fetch with Omphalos.

Lycaon ran off and grabbed an Omphalos, meanwhile my Circe’s Wolves were being obliterated by Cereberus fire but they were able to shield Circe, and then come back to annoy the Zeus player who happened to be controlling Cereberus.  It also bought enough time for Lycaon to return, drop his Omphalos for his mistress (who still hadn’t appeared yet) and charge Cereberus.  He lost, of course.  Cereberus is huge by comparison but it bought time for Orion to show up.

Cereberus and Orion spent the next few rounds ripping and thumping into one another until, bloodied but unbeaten, Orion emerged victorious with a new triple headed dogskin rug.

Meanwhile, the Zeus player was having a bit of a time of it as he had taken Zeus to the centre of the field.  By this point Athena had finally arrived, but I held her back as I didn’t want her blasted by Zeus’ lightning.  In fact, her ranged Owl attack helped Orion in his defeat of Cereberus (though he did most of the damage, Athena did help).  The player on the opposite of the map, fielding Artemis, her hounds, a troop of Amazons, Atalanta and another archer (I think) were slowly chipping away at Zeus armour until he eventually succumbed to mass fire.

I should say at this point, again as a result of watching some Beasts of War videos, we were doing combat slightly wrong.  Not massively, but it had the overall effect of potentially reducing the number of wounds applied.  We were also doing miniature activations slightly wrong.  That actually would have made quite a difference for me in some aspects of the game, but despite that the game still played well.  Meanwhile on the other board…

Aphrodite was off with Arachne and Hippolyta not doing very much.  Hades sent Medusa into the main force of Helios Troops and petrified the lot.  I think that happened a couple of times.

In the end we ran out of time.  I deduce that was a combination of us learning, doing things wrong and the numbers.  No one really won, no one really lost.  Except Zeus because he was dead, forcing the rest of his army to retire.  I had a very enjoyable game, despite us making many mistakes in the playing.  Gameplay was simpler than the shear volume of stuff would have implied.  Combat was actually pretty easy (What we were doing was a stripped down version but basically the same).  I liked the drawing cards element to activate troops.  I guess that almost simulates the chaos of a battlefield meaning you can’t always rely on this unit or that to do their job exactly when you want them to.  Athena was great for extra activations and she had a great loop combo that would mean she’d be able to do it almost every turn, if you can get her on the board.  Circe would have been great against the Artemis Player.  She is a troop killer, as is Lycaon.  Orion did his job of thumping Cereberus.  Now I have a rough idea of what everything does.  Next time…

When I got home from the gaming weekend I found the pledge manager and decided to back the 1.5 version of the game.  And I added the Poseidon expansion as that adds Naval Battles to the game as well as the old misery, Poseidon himself.  And it adds Scylla and Charybdyss (which appears as a giant maw, similar to a Sarlacc pit in the ocean, rather than a whirlpool).  It is expected to arrive next year, and I am quite excited about that.  I am quite excited they are doing Mythic Battles Ragnarok on Kickstarter next year to do the same for the Norse Gods – and the two games will be compatible.  I am assured by one of my friends that he intends to back Ragnarok and as such we can expect to see a clash between Olympus and Asgard at somepoint.  Did I mention I was excited?

All the best to you!

3 thoughts on “Mythic Battles Pantheon, or how we managed to get the rules massively wrong and still have fun”