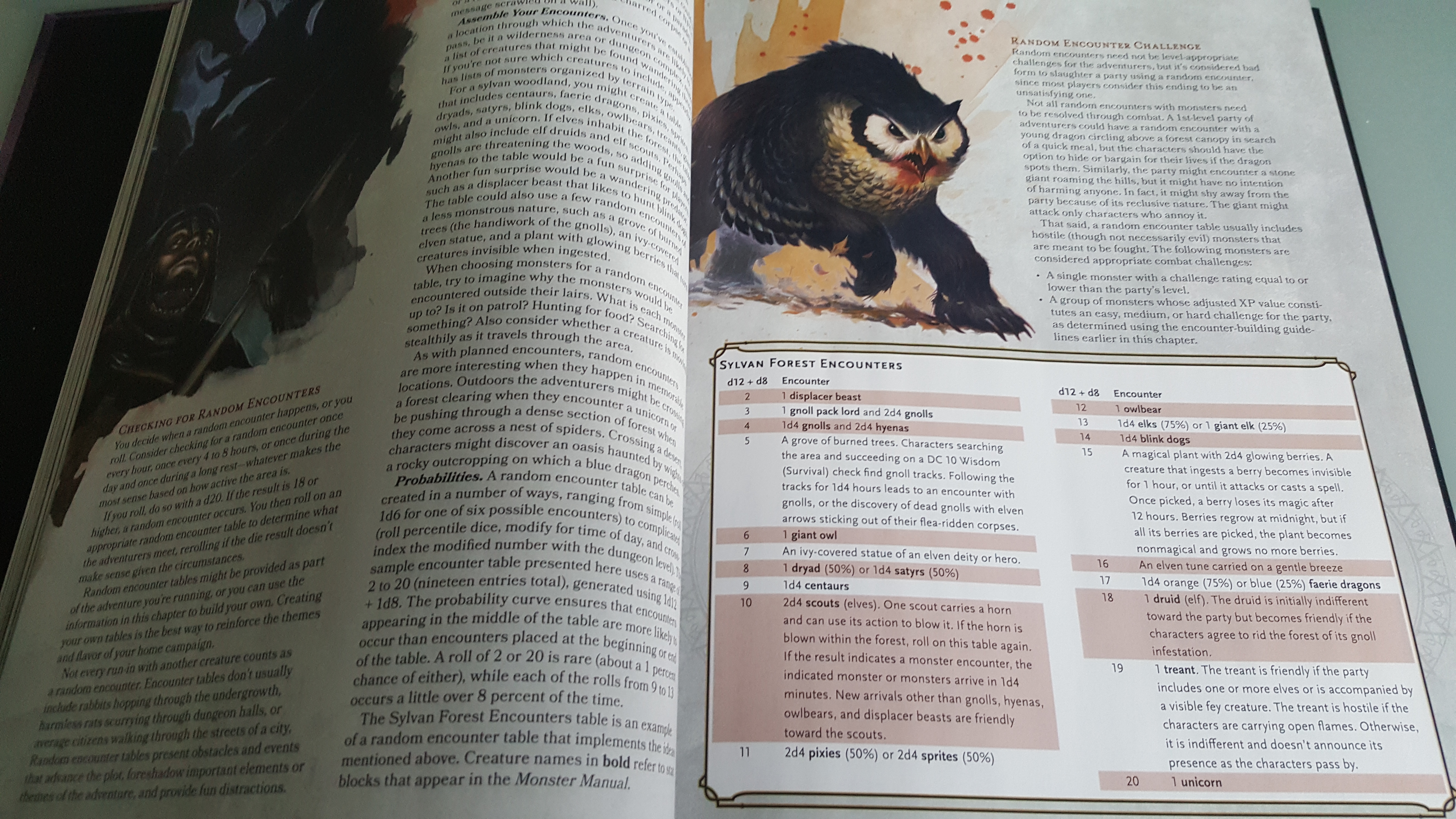 Hello everyone, welcome.  Today I wanted to talk about one of the apparent staples of many roleplay games.  I am talking about the Random Encounter, and specifically I want to talk about whether they are necessary or not.  I honestly never thought I would be writing about this topic, however the other day I was surfing a facebook group, (OLD) Classic World of Darkness and one of the posts there was asking if anyone ever used random encounters for their World of Darkness games.  And after bravely venturing into the comments (reading comments on posts in large facebook groups is often quite disheartening to see how nasty they can become in large groups) I was pleased to find a reasonably healthy discussion.  So I started thinking beyond the context of World of Darkness games.  What purpose do random encounters serve?  Before going on, I think I need to define the scope a bit.  A random encounter is a frequent game mechanic used in roleplay games, unrelated to the machinations of any villains.  These encounters could be a random combat or simply meeting someone who doesn’t immediately comply with the wishes of the hero.

I think we need to ask ourselves, what purpose do they serve?  Though I have to say that particular question is bigger than one line so let us break it down.

Do they benefit the plot of the Game?

Do they benefit the Players?

Do they benefit the Games Master?

Do they help with atmosphere and pacing?

Let us take each of those in turn.

Do they benefit the plot of the Game?

My gut answer was immediately no.  However, on reflection I think that is a tad shortsighted.  If the purpose of the game is for players to venture on a specific quest towards a specific villain/confrontation/treasure then no, they don’t benefit the plot of the game.  Obviously if you have an arch villain, they can certainly send random hirelings or perhaps even command monsters to attack, but that is villain agency rather than random occurrence.  On the other hand, if the purpose of the game is more focused on the development of character then a random encounter that challenges some preconception might benefit the plot.  For instance, you have a basically good character in pursuit of a villain.  Let us say it is in a fantasy style game.  The villain has about a day lead, though the heroes know they are gaining on them.  Insert a random encounter.  An overturned cart, a wounded teamster and his daughter who happened to be on the journey with him.  They were raided by bandits, who have run off with something.  Do the basically good heroes stop and provide medical help?  Do they hunt the bandits?  Or do they press on “for the greater good”? If the game is about the progress of a group of heroes, the choice made here defines what kind of heroes they are and can lead to interesting roleplay.  Particularly if not everyone in the group is as good and pure as they outwardly appear.  (and this choice could have repercussions later – maybe the teamster is more than he appears?)

Do they benefit players?

In a game like Dungeons & Dragons, the obvious answer is yes.  Random encounters provide experience points and loot.  That is, unless you are playing a game where experience points are calculated differently (Such as World of Darkness) and/or you are playing a game where loot is less important.  Then, the combat encounters at least, they become less valuable to players.  That being said, not all random encounters are combat.  Let us take the attacked cart from the previous paragraph as an example.  If the players choose to help giving medical attention, maybe they gain some useful knowledge through conversation.  Not necessarily directly related to the main plot, but if you have a world rich in lore, it might be a good opportunity to inject some of that or share rumours (for instance news about the road ahead, or goings on in the next city).

Do they benefit the Games Master?

You could make an argument that if the Games Master is struggling to keep the players engaged, or is having a memory lapse about what is due to happen next, then a random combat encounter is one way to bring focus back to the table, whilst giving the Games Master time to gather their thoughts and notes.  That being said, if the issue is the Games Master needing a stopgap due to a lapse in memory, I am not entirely convinced that a “random” encounter is the best way forward.  They may end up spending the next few minutes rolling on the random monster table and then digging out the stats for the appropriate opponent.  As a means to focus players who are drifting, then perhaps they are a benefit to the Games Master.

Do they help with atmosphere and pacing?

I suppose it boils down to what kind of game is being run.  If the game is loaded with action, and there is a long period of not much happening then the random encounter helps with the pacing.  If the players have spent an intense two hours investigating their foe, have uncovered what they were looking for and were returning to their base or patron and suddenly they are attacked by random unrelated opponents (an over ambitious mugging, for example) then this might actually detract from the pacing.  As for the atmosphere, I think used properly every random encounter can add to the atmosphere and build on it.  Are you in an untamed wilderness, traveled only by heavily armed caravans?  An Owlbear attack only adds to that?  Are you in a city overflowing with poverty?  Desperate muggers reinforce this.  And, again, not every random encounter needs to be combat.  The ruins of an earlier caravan, unrelated to plot, possibly with some useful supplies in it reinforces the harshness of nature.  Mothers and babies lying in side streets, wallowing in filth reinforces the feeling that the city (or this part of it) is overflowing with poverty – and those that can do stuff about it don’t care enough.

Conclusion: Random or Not?

After writing this post and challenging some of my preconceptions I can see a lot of value in these types of encounter, but part of me still rebels at the idea of the “Random Encounter”.  Over the last few years I have moved away from fully scripted games, building NPCs, Locations and trigger events too riff from, however I still feel the need to exercise some control over the game.  That doesn’t mean I don’t throw these types of encounter at the players, but they are never random.  They are relevant to the situation, and have some purpose even if it is unrelated to the plot.  I have to say, I don’t think I am in favour of random encounters as such.  I think non-plot encounters are perfectly fine, but even if I don’t plan them out to the nth degree, I’d bookmark the page of the rules with the appropriate stats where needed or whatever.  That is just me, as I feel confident enough in running my games that I can drop a non-plot encounter in front of a player without needing to roll on a table.  However, as ever, it is whatever works best for you.  I think I will continue thinking of them as random encounters.  Non-Plot encounter is a mouthful.  I hope you have found my perspective interesting and perhaps useful.  Let me know in the comments what you think of this post, and random encounters in general.