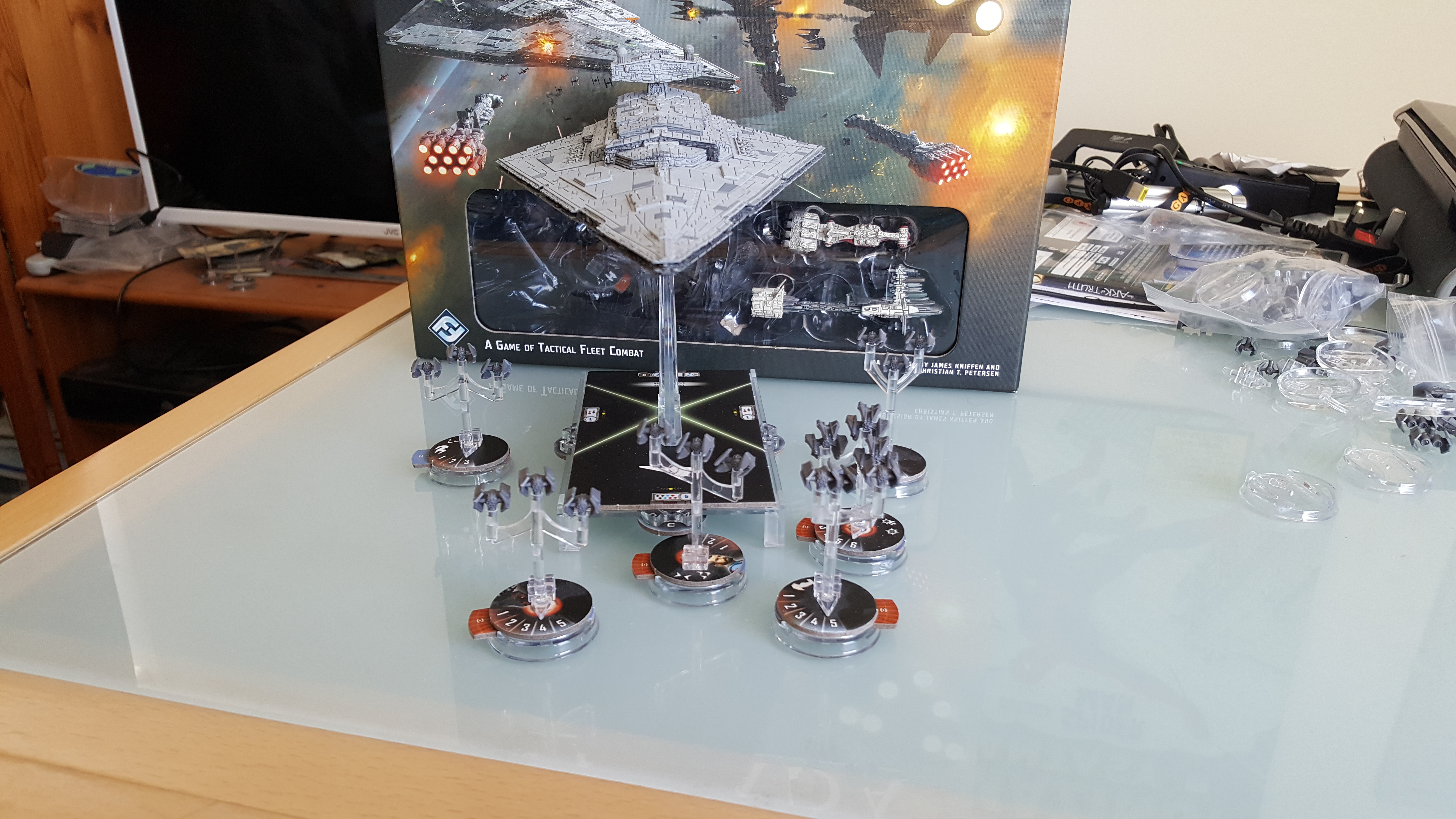 Hello everyone, welcome!  Any regulars among you will be aware I love many things Star Wars (though I think some recent films have been hard pills to swallow…), and one of those things is the game Star Wars Armada.  Star Wars Armada is a game of Fleet Combat between the Dread/Mighty Imperial Starfleet and the Cunning/Courageous/Treacherous Rebel Alliance.  As you might have guessed, I am an Imperial Player because I like their ships and fighters more (though I have to admit a fondness for the classic rebel fighters, X Wings and Y Wings).  I have done a number of unboxings but due to space constraints and availability of time and opponents, I hadn’t been able to play for a while.  Back in May, Andy (my Games Store Owner friend from a nearby town) was on one of his regular supply runs to my town and I was having a coffee with him when discussion turned to Armada.  It seems there was a whole gaggle of players in a similar situation so we decided to plot and scheme.  The end result, first Sunday in July we had a 3 vs 3 750 point game.  I was Imperial as noted, along with Alan and Andy.  The Rebels were Stuart, other John and Rob.

Stuart and I were travelling together and picking up other John enroute aiming for an 11am start.  Little did we realise the other 3 players had concocted a scheme before our arrival.

They had decided (rather unwisely for reasons that shall soon become apparent) on doing a Rebel Ambush Scenario.  A Corridor of space was defined with a finish line; the Imperial Victory condition being to get 250 points worth of ship across that line.  Stuart Helpfully measured the travel distance and informed us that the Imperials could not cover the distance in the allotted 6 turns, even at max speed.  So, start and finish lines were re-plotted and then came the discussion about how half of the players were not consulted on the scenario.  I had a full case of imperial ships and fighters, did a quick calculation and swapped out two bomber squadrons for 2 interceptor squadrons.  I wasn’t keen on the scenario – An Imperial Star Destroyer is built to be a firebase and a carrier group.  It isn’t built for running away.  I know there was a couple of other folks who were wary, however as it was a friendly game we decided to carry on regardless as adults do.

An Imperial 1 Star Destroyer as my Carrier

My Plan had been to field bombers but when I saw that my Imperial Team Mates had created lists that were comprised of 1 Imperial Star Destroyer, 1 Victory Star Destroyer, 1 Tie Fighter Squadron, and an admiral each, with one of them managing to get an Imperial Raider into the mix, I changed strategy dumped my bombers (and a lot of weapon upgrades, added to points the other two had left over) and swapped them for Interceptors.  My new job was to secure the right flank and be one of the Runner Star Destroyers.  I was provided a Victory Star Destroyer as escort and deployed my Fighter Screen around.  Rebel John was the only Rebel on the Right Flank, with an Assault Frigate, a Blockade Runner, Phoenix Home and a smattering of X Wings and y Wings.  I was less concerned about the Blockade Runner or Phoenix Home as I was the Assault Frigate.   I figured the Rebels would attempt to destroy the Victory Destroyer on my Flank as an easier kill, using it as cover from my guns until they could engage me.  I figured the Rebel Ships would have to move into weapons range on their first turn as they deployed very close to my starting position.  I figured if the Victory Destroyer was destroyed, or it activated before me I would have a clear shot on a broadside or forward arc (if not both).  I was also counting on using my fighters to, supported by Admiral Sloane’s ability to chip away at Rebel Shields before the Relentless opened fire.  My Wing Commander would allow me to activate squadron orders each turn, which would probably allow my fighters to act long before Rebel John’s fighters.  That was the plan.

The Rebel Fleet dropped out of Hyperspace and turn 1 began.  Phoenix Home launched an unexpectedly deadly salvo onto my Escort Victory Destroyer.  It seems the rebels had outfitted it with a fair amount of ordinance and were hoping for a decisive first strike.  And they did damage to the Victory, but it still functioned.  The Victory returned fire hammering the living daylights out of Phoenix Home, however it survived (tough little ship).  Happily, the Victory moved, clearing my firing arc.

The Rebel Blockade Runner performed a running attack as it attempted to get behind us, adding some more damage to the Victory.  It was then time for the Relentless to activate.

In my first round of Combat, I tapped my top command dial and then informed my colleagues and foes that my Wing Commander decreed that the command dial be squadron orders.  This was in violation of strategy to concentrate fire, however that strategy wasn’t going to work as I had blocked lines of sight on the rebel ships.  Accordingly 5 of my 6 squadrons activated.  Normally Relentless would only activate 4, but I had installed an expanded Hangar meaning it could control more squadrons. My Tie Defender finished off Phoenix Home (first Kill to me) whilst my Tie Advanced Squadrons, Soontir Fel and and One Interceptor Squadron began chipping away at the Blockade Runner’s shields.  On turn one I got a broadside on it, but it didn’t destroy it.

By the end of Turn 2 the Blockade Runner was gone, and all my fighters were still intact.  The Victory still guarded my flank doling out damage to the Assault Frigate which ultimately scored a kill on it.  Not sure if that was turn 2 or 3.  It starts getting fuzzy in regards turns from this point.

Regardless, Every single turn I called Squadron Orders.  I was able to tie up Rebel John’s Fighters with Darth Vader and Soontir Fel, catching them in an Engagement Trap that whittled them down and kept them bottled up whilst my remaining squadrons strafed and bombed the Assault Frigate as a precursor to Relentless Bombardment.  Within another turn, I had turned Rebel John’s Fighter Wing into a sole remaining Y Wing which I tied up with a Tie Interceptor before sending the rest to the other flank.

My allies two Tie Fighter Squadrons survived 2 turns, locking down some Rebel bombers.  The left flank Victory Destroyer was gone, and the left flank Imperial was taking heavy damage.  However, the Imperial Ships now had a commanding lead on the Rebels which meant that we were more or less guaranteed victory.  Though, Stuart pulled a Fighter Trick I had seen him use before (and to be fair it is a good one).  He had Hera Syndulla in the Ghost flying formation with some B Wings and Ketsu Onyo.  Onyo decreased the speed of enemy fighters in range, intended as a deterrent whilst the Ghost and General Syndulla allowed the B Wings to operate independently of a Capital Ship (They gain “Rogue” special rule, meaning they can move and shoot in squadron phase, whereas normally it is one or the other.  The only other circumstance where fighters move and shoot is when they are activated by ships on Squadron Orders).

I flew Fel, Vader, Stele, my remaining  Tie Advanced and one Interceptor Squadron and smashed both Ghost and Shadow Caster in one round.  Annoyingly, the B Wings (both on 1 health) survived.

With time marching on and the last serious threat to our 2 practically undamaged Star Destroyers gone, an Imperial Victory was declared.  Whilst I am satisfied with the performance of the Fleet combination I don’t think Bragging rights were earned.  In the end I took 1 damage to my shields, lost one tie interceptor squadron, and with my own ships got the killing shots on three rebel ships, 6 rebel squadrons and 2 rebel freighter/squadrons.  The capital Ships, somewhere between 50 and 66% of the damage done was mine.  For the squadrons, that was mostly mine.

I was actually doing Crits wrong for fighters (the rules technically do cover the thing I was doing wrong but it is worded in a way that made me think otherwise.  Fortunately Rob set me straight).

Used properly, Fighters can make or break a battle.  But, the other Imperials didn’t actually suffer too badly without their screen (though if the game had continued, my fighters probably could have demolished the rebel fighters – they were painstakingly chosen to work well together, and that they did).

In terms of ambushing forces, deploying further down the table would have given the rebels more time to be in range before the Imperial forces outpaced them.

Rebel John shouldn’t have been the sole rebel on my flank.  He was borrowing a fleet, made from Stuart’s Left Overs, which wasn’t bad but wasn’t really a match for the fighter screen that I had taken a lot of time to weave together.

Stuart and I are going to be playing again in the near future on our own terms which I am looking forward to.  A game on our terms means that if I win, then I played well and if I lose then there is undoubtedly a lesson to be learned.  Either way it will be fun, as was the Relentless Ambush.  In the meantime, my fleet got packed away and is ready to invite further Rebels to Gunnery and Strafing Practice.