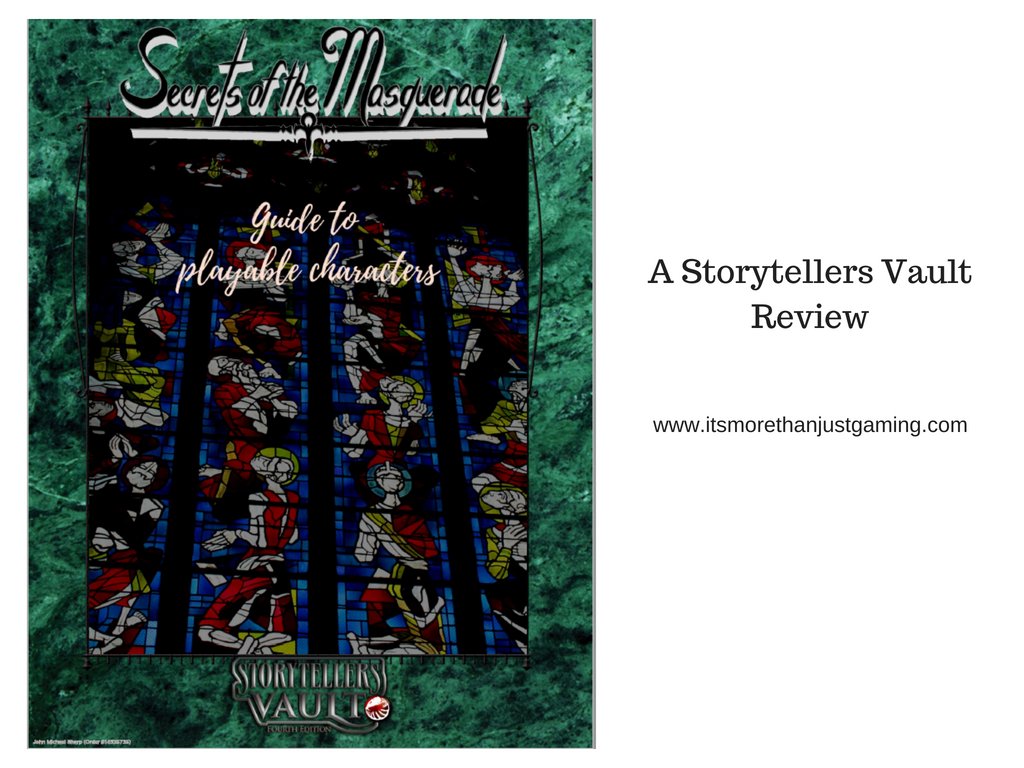 Hello everyone, welcome.  Today I am doing another Storytellers Vault review, this time for Secrets of the Masquerade – Guide to Playable Characters.  Disclaimers.  I was provided a free copy for review purposes.  This Product is available from the Storytellers Vault, a website that I have affiliate status with.  This means that any links to this product or the Storytellers Vault are tagged, and if you click them and buy anything, I make a small commission.  In order to give you choice, I will also include a “clean” link free of tags at the end of this article if, for any reason, you want to support the product but not necessarily this site.

Now that the boring stuff is out of the way, on to Secrets of the Masquerade – Guide to Playable Characters.  Something that I noted and even wrote about last year in my Quest for the Perfect Game Series is that some games are more fun than others, and one of the conclusions I came to was that people were coming to games with different ideas about what makes a good game and what their responsibilities as a player are.  As a result some games are really fun, and others are a challenge to play or run.  Secrets of the Masquerade is not so much a sourcebook supplement for the gameline, Vampire: The Masquerade so much as it is a technical manual on getting the best out of your game.  Secrets goes into a great deal of detail about character creation, starting from creating a human (there is an entire chapter on this) and then dealing with who might embrace such a person and why.  It then further delves into the various clans talking about the author’s perspective on each of them, what options players might explore and even assigns a dominant adjective to give players the theme or mood.

Secrets very much encourages the reader to move beyond the accepted stereotypes of character, moving players and storytellers away from creating character concepts based on clans or simplistic notions.  Later sections then deal in areas that, if I am honest with you, were unexpected but not unwelcome.  Secrets discusses the nature of playing a dead character, and posits that any character that has undergone an embrace (and is clinically dead/undead but is still walking/functioning) is going to have serious issues to work through.  These sections expand into a general, researched and informed, but not necessarily expert discussion on mental health given that derangement and madness is part of the game.  These sections are written in an academic register and encourage the reader/player/storyteller that if such things are going to be part of the game they should be researched, and treated appropriately and respectfully.  To put another way, Malkavians (the insane clan) aren’t cute.

There is also a detailed section on how the undead view such things as race and LGBTQ+, with suggestions on how such things can be added to a game and treated respectfully and properly.

The suggestions about character creation, particularly about starting by building a human, were mostly great.

The detailed information on clans was interesting and useful.

Inclusion of Race and LGBTQ+ was also beneficial from an educational standpoint.  We still live in a world that is not fair and only through education can such inequity be overcome, and one way to make education (particularly about that which is different) is to do so through entertainment.  Respectful entertainment.

Truthfully, the version I read could have benefited with more editing.  Most of the time I could understand the intended meaning, so that is a plus but I feel it needs a tidy up.  This appeared to get better the further in I got.

The tone was a bit off for me.  I realised later on that the book was written in an academic register (albeit slightly easier to understand than academic journals…) however there are parts that were quite heavy going even for a graduate  of Literature.  The early portions of the text felt a bit bossy.  Most, if not all other, roleplay suppliments I have read always take the view point “It’s your game, our rules are for guidance and it is up to you to how you play your game.”  The early tone felt very much “This is the right way to do things.  Other ways are wrong”.  I should say, tone aside, I agreed with 90% of the content in terms of character creation but when it came to the other 10% (which I really disagreed with), it got my stubbornness going.  This was less of an issue once I got about 30% through the book as it relaxed somewhat.  **Update.  Have Spoken to Author and I am informed there is an updated version of the PDF on Storytellers Vault with the tone somewhat softened.  I will update this section when I have had a chance to read through

Secrets of the Masquerade is a good help guide for players and storytellers looking to run a serious, dark, player oriented story game.  There are lots of useful suggestions that players should consider at character creation and even a few character ideas dotted through the work.  I would just add the tag, remember it is your game, but don’t disregard guidance out of hand without considering it first.

You can purchase Secrets of the Masquerade on the following (Clean, tag free) LINK

1 thought on “Secrets of the Masquerade – Guide to Playable Characters”