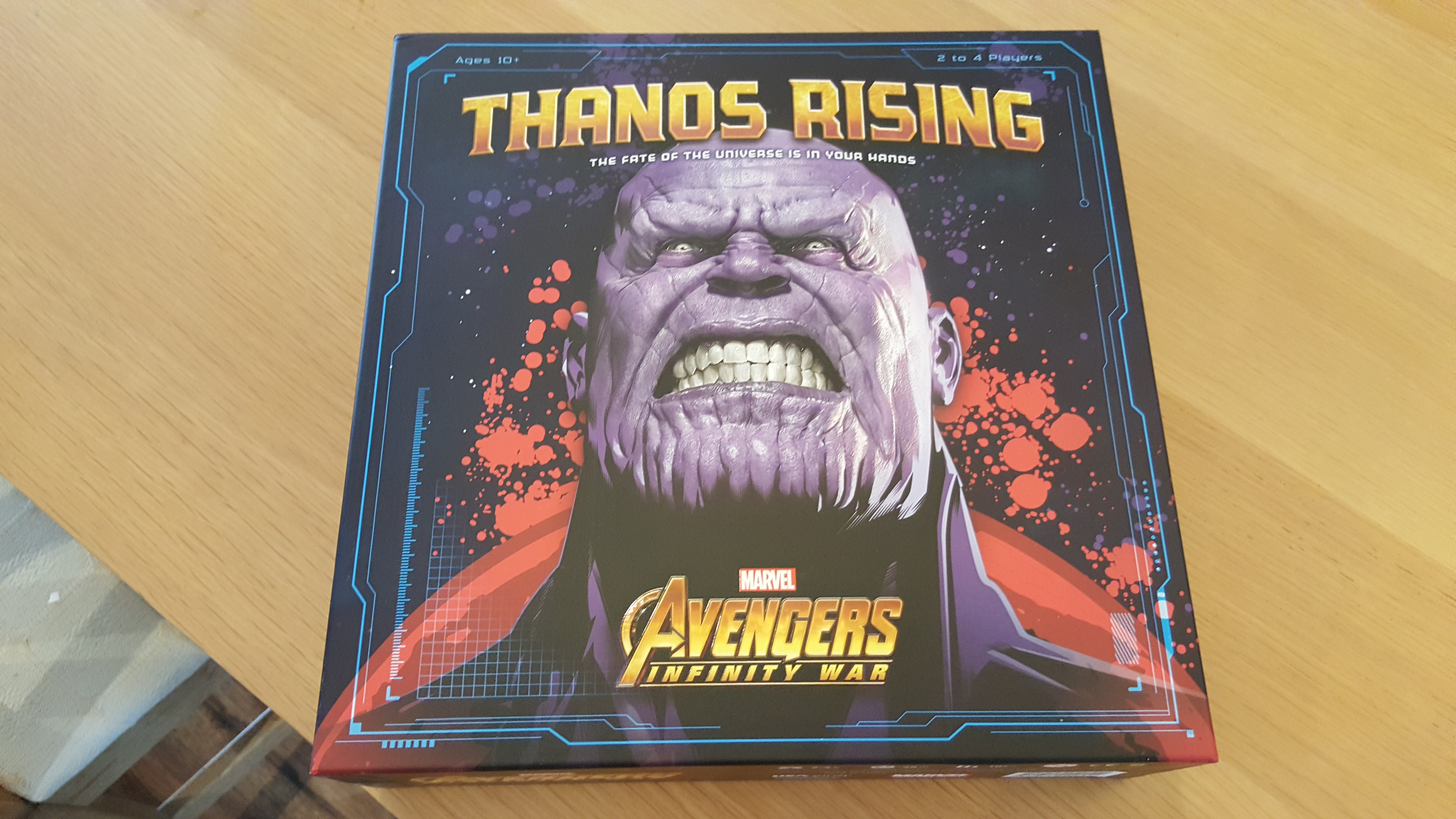 Hello everyone, welcome.  Today I am going to write about my first play of a game called Thanos Rising.  Thanos rising is a cooperative game for 2 to 4 players, where each player takes control of one of four hero teams and tries to stop Thanos before he gains all six infinity stones and assembles the Infinity Gauntlet.  The game is not currently available in the UK, but thanks to generous friends overseas my friend, Barry, was able to get a copy and I was able to play on a recent visit.

The visuals of Thanos rising are very much dictated by the MCU, as we can see here with Thanos but perhaps it is more obvious looking at some of the hero cards.

The game is very straightforward, fast paced and by no means easy.  The Game starts with Thanos standing in the centre of the game board, which is split into 3 sectors each of which have three cards attached.  These cards can be recruitable allies or enemies to defeat.

Separate to the main board, but no less important is the Infinity Gauntlet.  Each turn, before a player gets to act, the Thanos dice are rolled which dictates which way he moves and which Infinity stone he is either 1 step closer to acquiring (or which one activates).

At the start of the game, the Gauntlet is empty and Thanos needs to gain 5 infinity cubes of any given colour in order to acquire the relevant infinity stone.  Unfortunately for the player, one of the Thanos dice is a six side dice that has coloured symbols representing each of the different infinity stones on the different sides.  And he roles this dice every turn before players activate.

The game, at its core, is a dice pool building game.  You either pick your starting team or assign them randomly.  The teams are Combat (led by Captain America), Technology (led by Black Panther), Cosmic (led by Gamorra) and Mystic (led by Dr Strange).  No one was surprised when I asked for mystic as I am about as big a Dr Strange fan as Barry is a Thanos fan.

Actually, no I probably am not as big a fan as him as I only have one Eye of Agamotto and one Dr Strange T Shirt and he has multiple Infinity Guantlets, an entire army of Thanos models and enough T Shirts to sink a sizeable cargo ship.

Anyway, you start with your Team Board and Team Leader.

Each player then has a starting dice pool of 4 dice, three of which are red combat dice and the fourth is the colour of your team.  Green for the green mystic team, Blue for the blue Tech Team, Red for Red combat team and Black for the Purple Cosmic team.  No idea why they chose to have inconsistency in the cosmic team.  The dice have combat, tech, cosmic and mystic symbols and the colour of the dice dictates what symbol is favoured.

Turn order is straightforward.  The player decides which sector they are going to go to, to recruit heroes or beat villains.  Then, the Thanos dice are rolled, one of which will give him an infinity cube and one will either move him, make him activate other bad guys and one grants him a second roll of the gem dice.  Wherever Thanos ends up facing, all heroes in that sector (including potentially the active player) take damage.  If any of his generals are present, they activate and trigger any relevant abilities  (The named Generals like Ebony Maw or Cull Obsidian are brutal…)

Once Thanos has had his go, the active player then gets their turn.  They roll their full dice pool, so in the case of the Mystic Team it is three reds and and a green.  In order to recruit a hero or inflict a wound on a villain, you nee to match every symbol on their card.  So, recruiting Dr Strange requires two mystic symbols (the eyes) and three combat symbols (the explosions).  To be honest we just called them eyes and bangs.

You can continue rolling as often as you have dice, but after every dice roll you must assign a die to a symbol.  If you can’t your turn is over.

Early game you are wanting to recruit other heroes, particularly low cost heroes of your team as this usually means you get more dice to roll on any given turn.  Other heroes allow rerolls or to flip one symbol to another and in some cases have triggered abilities.  For instance using two mystic symbols on Mantis allows you to heal two wounds from a hero.  The last thing about basic gameplay is that if you inflict a wound on one of the villains, you gain a bonus token which might be a free symbol useable once by any player on one roll, a free dice for a single turn, removal of wounds from a hero or the like.

Compleeting the Infinity Gauntlet.  Defeating one entire team.  Defeating 10 Heroes, whether from a team or unrecruited.

Players have one win condition.  They must defeat Thanos henchmen.  7 in an easy game, 10 in a hard game.

We played the game twice in a couple of hours (and that included teaching it to me, and me getting the blame for nearly losing us the first game and the round of applause when my Hulk defeated two henchmen in a turn).  We won both games but it was not easy by any stretch of the imagination.  I suspect it might have been a bit easier except we got quite a few rubbish dice rolls at various times, which led to our Mystic team doing absolutely nothing for about 5 turns in the second game.  The Doc couldn’t do damage and he couldn’t recruit.  They should have let me play mystic again…(I was Captain America that time.  Backed up by Groot, Shuri and the Hulk – admittedly Shuri was ultimately defeated much to my annoyance).

If the dice fell a bit more uniformly I suspect we’d have a 50/50 shot at a hard game.

Thanos Rising was an amazingly fun game that I have hopes will formally make it to the shores of the UK and be reasonably priced as it is one I would happily play time and again.  Thumbs up from me!