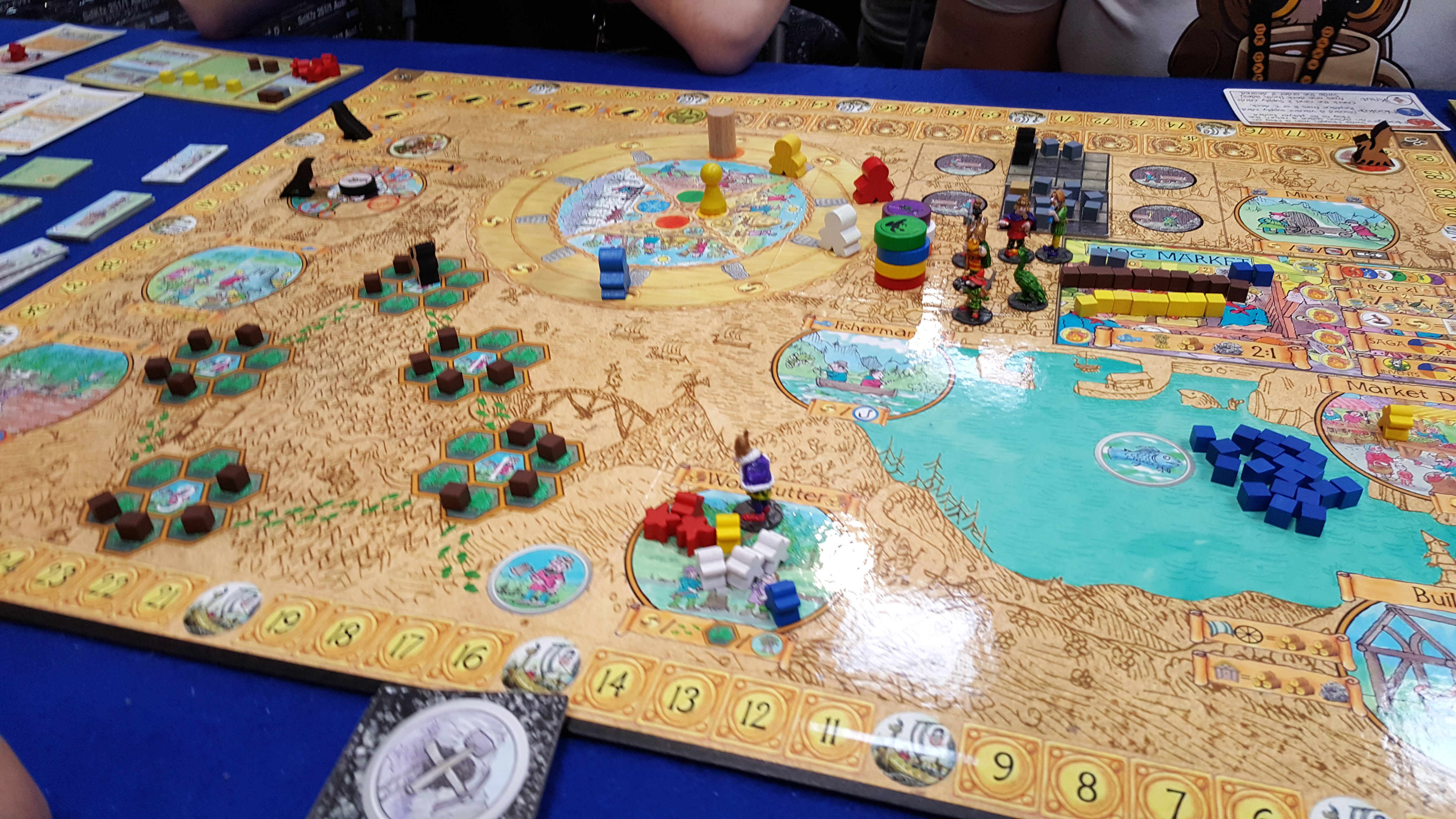 Hello everyone, welcome.  Today I am writing about a game I was able to play test at the UK Games Expo that recently met its Kickstarter target.  Sadly there was no way I would be able to get this post up prior to campaign end, else I would have done so as I want to show support for a great game.  As it was, I backed it despite being on a Kickstarter Break.  The game was called Tales of the Northlands; The Sagas of Noggin the Nog.

Noggin the Nog was a children’s TV show, admittedly slightly before my time though I do vaguely recall seeing repeats when I was a kid.  It was cartoon about Vikings, which made it pretty cool by default.  This game is based on that cartoon, made by a huge fan.  You can have a look at their Kickstarter page HERE, though sadly the campaign is closed and it doesn’t currently look like there are late backer opportunities.

So, onto the game.  I was only able to book onto an hour long demonstration which covered 2 seasons (play is up to 8) and a rules introduction.  I did a video recording of the entire demo.  The audio is not excellent as I am still figuring out my microphone and and the camera couldn’t get everything but it you want a taster, by all means have a watch.

In the game, players take the roles of Lords of the Northlands trying to help their King, Noggin, keep the throne whilst the evil Nogbad the Bad is trying to usurp control.  Players do this by going on sagas, building inventions and so on, all of which is made possible by harvest of resources.  At its core, this game is worker placement to generate resources that can be used to fuel the sagas, build inventions, or if you are like me in such games, build the infrastructure.  Players take it in turn to place nogs on the board, moving their playing piece on the Roundel as many spaces as their nogs take actions.  When an action stops, if they are the nog in the lead their turn ends.  If they are not in the lead, they may choose to end their turn so long as they are not the last nog nor can they be sharing with another nog.

In that image, Blue Player is way out front with White (me) a few spaces behind, red just behind me and yellow at the back.  Once a player turn finishes the rune marker moves to the trailing player and they take a turn.

This game was quite possibly the most fun I had at the UK Games Expo this year.  I do enjoy strategy games that have limited chance in them.  That is to say I prefer games that rely on skill than chance, not that I prefer games with small elements of chance.  I was player three when we started which meant that I would be able to get quite a few actions done before I would start tearing into the lead.  I had watched the other players harvest wood and mine stone, even fishing in the Fjord.  But as someone who has played Clans of Caledonia  and Lords of Waterdeep, I was very much aware that in a game such as this it is ok to lag behind the pack for much of the game building infrastructure, and stealing a win in the final turns.  So I chopped down trees, harvested stone, and then sent a nog to the Builders which no one had done yet.  I built an upgraded fishing boat and then went fishing getting a maximum of 4 fish.

Play proceeded around the table with folks realising they could build, they could bid for counting house cards, build inventions and even try to complete sagas.  All of which helps Noggin win over Nogbad, but also determines which of the players won.  I didn’t really spend any time on the sagas, inventions or counting house because I didn’t have the full understanding on the counting house and I felt the others were too resource intensive early game.

We did have a harrowing moment when Nogbad released bears into the woods at the start of season two, preventing us from retrieving our woodcutters (I had three there…) however as I had a lot of fish I was able to send one of Noggin’s friends to chase him away.

The board is beautiful.  I was informed by Nick, the developer that the original artist did some new artwork in support of the game.  This ties the feel of the game verry much to the fans of the cartoon, which is aided by the fact that the sagas are based on stories from the cartoon.

However, this doesn’t really affect your enjoyment level if you weren’t a fan.  It won’t necessarily matter that the characters Thor Nogson, Graculus, Romf and Noggin are all in the game.  What will help you enjoy it is that each of these characters have different functions and effects on the game.

For instance it was Thor Nogson that beat up Nogbad and sent him packing from the woods.  And Romf helped me build my Longhouse even though it wasn’t available until next season.

The game was fairly slow for us as we were learning it along the way, but only insofar as every time we needed a clarification, we got one.  The actual play was relatively quick paced.  I had a lot of fun playing this game and was proud of my achievements in the first hour.

The red player was in the lead with 40 points as a result of inventing the trouser press.  In our final turn I went from penultimate player to second based on the number of Nogs and resources I had (but mostly nogs as I had 12 of them and I think that was the most on the board).

As I said earlier, I was quite happy to back this on Kickstarter despite being on a Kickstarter break.  In fact I just finished my backer survey with delivery estimated in October, and I have to say, I cannot wait!