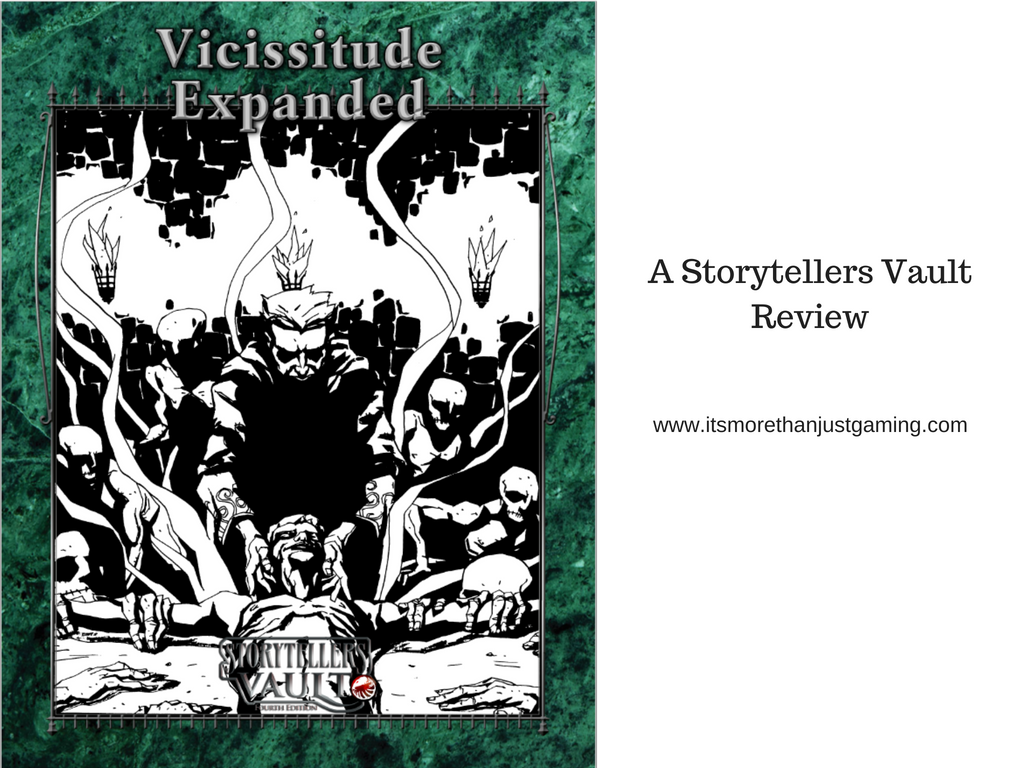 Hello there everyone, welcome to you.  Today I am doing another review for a creator from the Storytellers Vault (it feels like ages since I did one of these!)  This time I am doing a review for the sourcebook Vicissitude Expanded by Zack Ball.  Full disclosure, I was provided a free copy for purposes of review.  Also, I should mention that I am an affiliate of the Storytellers Vault, and anytime I hyperlink to the vault it will have an affiliate tag, which means if you purchase anything on that particular visit or shortly after I receive a small commission.  If you wish to view Storytellers Vault Products without clicking on a tagged link, there will be untagged links at the end of this article.

Since it has been a while, I will just provide a small reminder.  The Storytellers Vault is a community content creation portal for the World of Darkness line of roleplaying games.  Basically, players can create non canonical content for the game and sell it on the vault, which is great.  OK, on to the review.

I have read and reviewed products from Zack before, the Elder Discipline Compilation and the Combination Discipline Compilation, both of which were enjoyable and useful reads.  They provided an expanded list of cool powers that Vampires could use in games of Vampire: The Masquerade, Vampire: The Dark Ages, or for antagonist vampires in other World of Darkness games.  Vicissitude Expanded follows in the footsteps of these worthy additions, this time focusing on one particular Vampiric Discipline.  The flesh and bone crafting art of Vicissitude, practiced most often by the fiendish Tzimisce.

The Basic rules of Vicissitude supplied within core books are fairly detailed giving an overview of what is possible, in terms of molding and warping flesh, reshaping bone or even altering your own body into a war form.  I have one particular player who goes through a lot of suits given his fondness for becoming a human (or monstrous) porcupine.  That same player also likes reshaping his target’s rib cage so that it penetrates their heart – leading to a rather grisly death in most cases.

Vicissitude Expanded takes this kind of thinking to the next level, drilling down to the very specifics of what levels of understanding a character needs in order to create a specific modification.  And given the rules are a bit vague on the cost of modifications (which might cause some mechanic oriented storytellers a bit of worry), Vicissitude Expanded helpfully supplies costs for modifications.

Want to give yourself permanent dermal armour?  This is covered.  Feel like granting your ghouls bio luminescence?  That is explained.  And who wouldn’t want a stinger and venom gland attached to their favourite guard ghoul?  Things like this are all included.  The book also includes a number of suggested punishments/innovations worthy of the Wamphyri in Brian Lumley’s novels.  And finally, some variant templates for Szlachta of various types and different breeds of Vozhd are supplied to simply drop into a chronicle (or perhaps build a chronicle around their creation).

For a start, I was quite amused by the title Vicissitude Expanded given that Vicissitude is all about elasticity of flesh and bone.  Not sure if it was a deliberate pun but I thought it was funny.

The list of modifications is quite extensive, even going into modifications that I wasn’t expecting/didn’t think was possible in Vampire physiology.

The pre-requisites and costs seemed fairly reasonable in terms of incorporating into play.

A cost system was suggested in terms of appearance enhancements, which was notably and worryingly absent the core books.

The Stuff You Need to Make Your Own Minds up about

Truthfully, there wasn’t anything in particular that I didn’t like about this supplement.  As I noted in the previous section there were modifications that my mind deemed not possible in World of Darkness Vampire Physiology, (An example here is an organ that allows regeneration of wounds) however that ignores two key things.  Not all modifications need to be on Vampires, and the nature of roleplay games is that anything is possible.  For things that I personally view as difficult/borderline impossible I can still see them included in a chronicle either as something the players are trying to achieve, or perhaps an NPC is trying to do it and it is causing some repercussions in the game.  Perhaps a this regeneration organ requires difficult to obtain components (The heart of a Werewolf, for instance)?  Maybe if you want to give your ghoul a venom gland, perhaps you need to get your hands on some poisonous snakes?  Perhaps whatever modification you are working on needs a specific component and the fleshcrafter hasn’t determined what that is yet (undoubtedly leading to some messy failures and an angry fleshcrafter…)

So, like I say, whilst there were a number of modifications that raised an eyebrow, I can envision ways of incorporating them.

The real test of the value of a supplement is whether or not I feel I could use it in my chronicle  (not necessarily would, but could).  After reading through the list of modifications in Vicissitude Expanded I actually grabbed one of my notebooks (It has John’s book of evil plots on the cover) and started writing NPC ideas and subsequently the plots they would generate.  Not only can I see me being able to use this supplement in my chronicle, I can categorically state that it will be used.  Hopefully to horrifying and grisly ends.  A definite thumbs up for me and you can find Vicissitude Expanded on the Storytellers Vault.

Click the Hyperlink to View Vicissitude Expanded on the Storytellers Vault

Untagged link to the Storytellers Vault