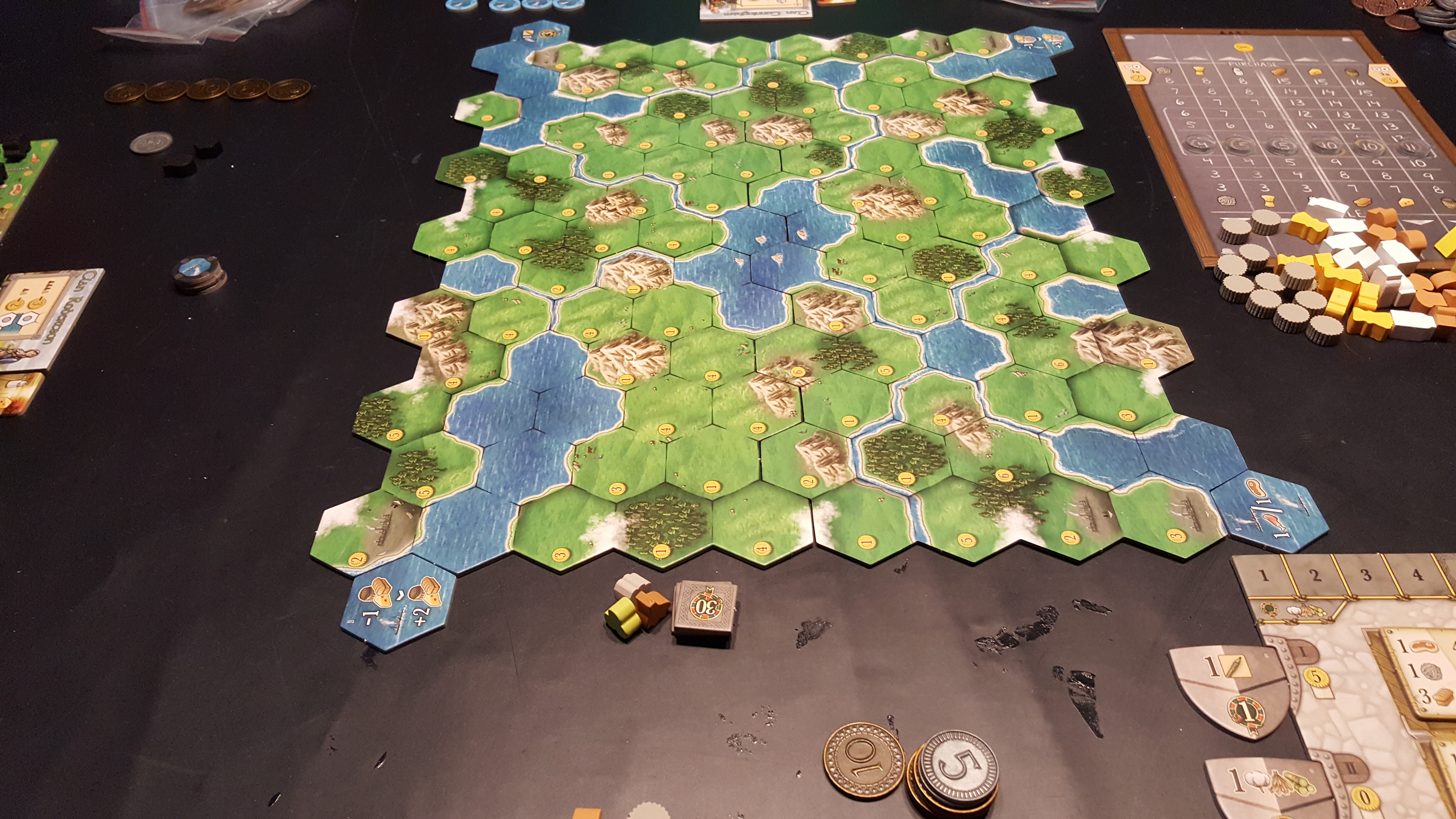 Hello everyone, welcome.  Once again I was fortunate enough to be playing a game that I had never played before and as such I am able to tell you about it now.  The game in question is a recent delivery my friend, Sarah, got after backing on Kickstarter – Clans of Caledonia.

Clans of Caledonia is a game of trade, territory control/resource management and economics set in 19th century Scotland.  Each player takes the role of one of the Major Clans and over the course of 5 rounds attempts to expand their trade empire, hiring merchants, developing infrastructure and exporting & importing goods.  At the end of 5 rounds, victory points are calculated and a winning clan declared.

Sounds simple?  It actually was, once we got our head round the rules.  Having played the game, with everyone learning the rules at the table, I would suggest this is a game that you probably should learn prior to play.  I think all of us struggled a bit early game, but by turn three we were all playing (and in my case, losing) like pros.

Each player takes a clan (I got Mackenzie, the Whisky making clan) and sets up a player board as in the image above.  The cubes represent merchants that can go to market (you start with 2 and can hire 5 more), the star represents influence over water (I started with none and ended that way), then left to right you have sheep fields, cow fields, cheese factories, bakeries, grain fields, distilleries, wood cutters and miners.

Each clan starts with  £55 and some resources (I started with £60, bread and wool).  Each clan then spends some of their starting money placing 2 woodcutters or 2 miners or one of each.  Each worker has a recruitment cost, and each land has a build cost.  Play starts.

There are 4 phases.  In the first phase, which is ignored in turn one, there is a cleanup of the trade board replenishing empty contracts and revealing the turn’s victory point conditions.

The previous image gives a better view of the trade board (on the right).  You can see there are 8 square tiles that have lists of 2 or 3 resources on the left and 2 or 3 resources/rewards on the right.  These are the contracts players choose from.  In the opening phase , if there are fewer than 8 contracts available, they are replenished.

Then we move on to the second phase of the round where there are a number of actions players may take, in turn.  They can take as many actions as they like in phase two so long as they can afford any costs.  These actions include:

Hiring a Merchant – paying £4 allows a player to hire another merchant.

Obtain a contract – In round one you gain £5 when you take a contract.  It gets more expensive by £5 each successive round until it is £15 in round five.  Players may only have one contract at a time.

Fulfill a contract – If a player has sufficient resources to fulfill a contract, they can do this as an action.  Fulfilling contracts sometimes confer immediate bonuses such as upgrades, reduced costs or money.  More often they grant the player imports of exotic goods, such as Sugar Cane, Hops, Silk or Tobacco.

Upgrade Woodcutter/Miner – Players can pay £10 to upgrade the equipment woodcutters or miners use.  This increases how much money they yield in the production phase.

Upgrade Navigation – Not sure if that is what it is called but, whatever it is called, for the purpose of building new infrastructure upgrading navigation allows players to consider things adjacent when across rivers or lochs (normally adjacent means adjacent).

Build Infrastructure – Players may place one of the items from their player board, for instance a grain field or a miner on a hex adjacent to one of their other structures.  Assuming they can afford the cost.

Once everyone has passed, the next phase is production.  Players gain money for all of their woodcutters and miners, and they gain grain from grain fields, wool from sheep fields and milk from cow fields.  If they have a dairy/cheese factory, they can convert one milk into a cheese.  If they have a distillery, they can convert grain into whisky, or if they have a bakery they can turn grain into bread.  Cattle and Sheep are sometimes slaughtered for beef or mutton when fulfilling a contract, and those resources are removed.

Then there is a cleanup phase where all merchants are recalled and then the next round starts.

So, that is the how of the game.  Did I like it?  Absolutely!

I enjoy resource management games, so I found the idea of placing grain fields (which are the only resource that yields two resources) followed by a distillery to make whisky to be an appealing one.  Personally, I don’t drink however the Mackenzie Clan gets money for every whisky barrel they make (its so good) and their other bonus is they can age it over time which makes £15 a barrel regardless of market price.

Which brings me to the market (grey slate in previous photo).  When a person sells stuff at market, the price goes down for every unit sold.  When folks buy, the price goes up.  I loved that.

I mentioned earlier that I spent most of the game losing.  In fact for the first 4 rounds I was in last place.  This was partly due to learning the game, and miscalculating my initial set up.  However in turn 3 I sold my first barrel of expensive whisky to market, killing the price for everyone but me.  I think by turn 4 I still hadn’t fulfilled a contract, however I had 4 distilleries, cows and sheep, a grain field and multiple miners.  In turn four I flooded the market with my whisky, putting the price to the lowest possible (whilst making £45 on the sale), and then used that money to buy cheap whiskey (£8 a barrel instead of the £15 a barrel I had sold at), slaughtered a cow and fulfilled first contract.

In the final turn, with a little bit of calculation (and a lot of cow slaughtering) and a lot of buying cheap whisky and selling expensive stuff (aged for three turns) I was able to fulfill 3 more contracts.  When the dust cleared, I didn’t win.  I did come second though and if I was to play clan Mackenzie again I think I would have a better game.

This game looked complex but in fact, the order of play is really intuitive.  I spent the last two turns hiring merchants so that when I had the money I was able to buy cheap stuff at market to complete contracts thus gaining victory points.  This is a game of thinking and market tactics that you can use on your opponents.  Drive the price down on stuff your opponents are making loads of.  Sell high just after they bought loads of the goods at market you are just about to sell.  There is no combat, but there is economic warfare.  And that was fun and different.  I look forward to my next game.