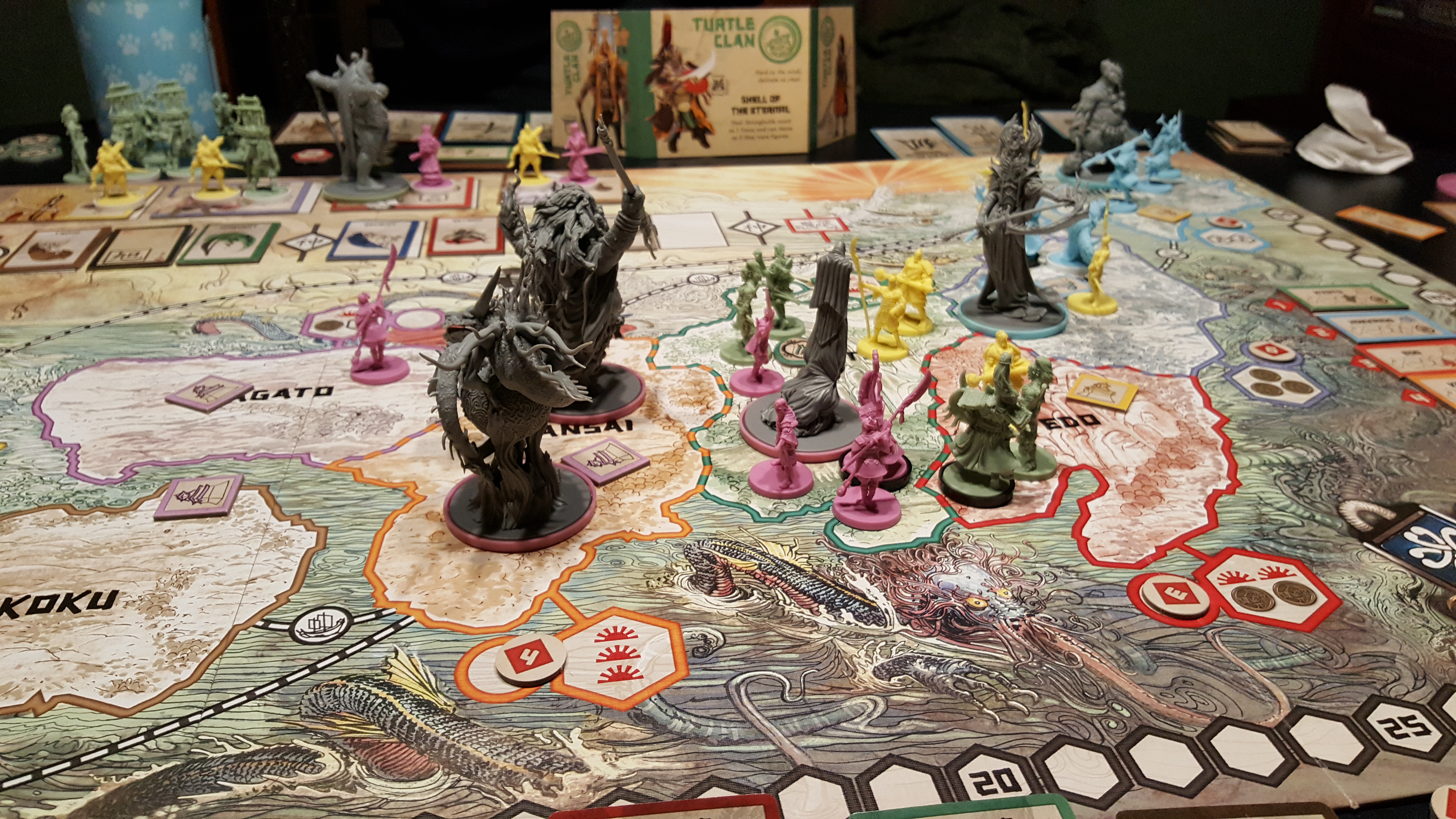 Hello everyone, welcome.  Today I wanted to talk about my first play of the game, Rising Sun.  Rising Sun is a recent acquisition of mine courtesy of a Kickstarter, produced by CMON (Cool Mini or Not), last year which arrived a couple of months back.  Sadly, due to other commitments we only just got to play last week.  I have done an unboxing article of Rising Sun previously on this site which you can read by clicking the link.  Anyway, on to my first impressions of the game.

I read the rules for about the second or third time before we got to play and was confident that the game mechanics were quite straightforward.  The Game takes place in a mythical setting of feudal Japan, with each player taking control of one of the various clans.  I was the yellow clan, clan Bonsai whose clan bonus allowed my to reduce the cost of anything I buy by one coin.  I was up against the clans Lotus, Turtle and Dragonfly.

The game is played over 4 seasons, Spring, Summer, Autumn and Winter.  In each season there is a Tea Ceremony where players get to create alliances with each other.  The rules governing negotiation are non existent.  Any negotiating tactic is valid, deals aren’t binding but when an alliance is agreed there are concrete benefits.  No one wanted to be my friend in Spring so I went it alone.

There then follows a political phase, where players go round the table drawing political mandates.  The active player draws 4 from the political deck and chooses one to enact.  These are things like Recruit, Marshal, Train, Harvest and Betray.  Each one confers a bonus on all (excepting betray), and a second bonus for the player who enacted it and their ally.  I have to admit that I can’t recall the turn sequence and forgot to start taking photos until Summer, so please forgive me.  I believe the first player chose train which allowed us to buy cards from the active season deck.  Cards can be enhancements to units, bonuses under certain circumstances and monsters.  I picked one of the Monsters.

Unless otherwise stated on the cards, Monster count as force level one in the battles fought in the war phase.  (Bear in mind force level 1 is one army…).  I recruited Komainu which, as it states on the card, counts as a Shinto.  A shinto being a type spiritual warrior in this game.  They count as force 1 same as regular troops but when they are recruited, instead of being sent to the field to fight, they can be sent to a shrine to pray to one of the deities.  I sent Komainu to pray to Ameterasu, the Sun Goddess.

Play goes round the table with each player taking a political turn, until there have been 7 political turns (this is uneven, meaning some will get 2 turns and others get 1).  After turns 3,5 and 7 there are Kami phases, where players who have sent Shinto to pray may get bonuses.  Basically going left to right on the 4 shrines count the number of shinto on each shrine, the player with highest number at the shrine gets the bonus.  In the first Kami phase I was the only one there so I got the Ameterasu Bonus, which pushed me to the top of the honour track (I was languishing at the bottom).  Honour dictates who wins ties and who creatures from the underworld are more likely to benefit.  (I have to admit, I also made a mistake regarding honour.  I thought it also dictated who goes first in the political mandate phase in future seasons – it does not and that may have changed the outcome of the game a bit.)

Either way we advanced through spring moving our troops around the board, I managed to get a second stronghold built and recruit some troops.  But soon enough it was the war phase.

Wars happen at the end of Spring, Summer and Autumn, and they only happen in provinces with a War marker (chosen at random at season set up).  Simply having two opposing forces in the same location doesn’t trigger a fight.  The battle process is very simple.  You use what coins you have to bid secretly on war advantages in any battle you are involved in.  These advantages include hiring ronin (if you have any), taking hostages, committing seppuku or hiring poets to write about a battle.

It was in Summer, I think, when I took a hostage…

The War advantages are really cool as it gives options for players even if they think they are going to lose.  In the final war phase of the game, I was fighting the Dragonfly Clan and they had more troops in province but I had more ronin and money.  So I hired Ronin.  The Dragonfly bid on Seppuku and Imperial Poets.  They knew they were going to lose so they committed honourable suicide gaining honour and victory points for the act, and then doubled the victory points as they also won imperial poets.  I won the battle but they got loads of VP in the war.

We advanced into summer and I remembered I had a camera with me at this point.

I had my home stronghold Kyushu and had sent my Daimyo (force commander) to hold Shikoku, which had been a war in Spring – uncontested victory for myself.  As you can see, the Lotus had recruited the scary monster Yurei that looks like she is from the Ring…

I love that miniature.  I should point out, by the end of the game the Lotus clan had most of the monsters recruited in the base game.  They were a force to be reckoned with on the field, to be sure.

I was managing to spread my force around the board a bit, though as you can see my yellow troops were starting to catch the attention of the Dragonfly.  See the big fella in the province north of Edo?  (I think it was Oshu).  I took him prisoner…

Of course I wasn’t to have it all my own way.

The turtle clan showed up in force during the summer months negotiating most strenuously that I leave Shikoku at once.  In hindight I should have stayed and used the Seppuku/Poet combo but instead I decided my force commander wasn’t about to get spanked by a monster, so I retreated him to Kyushu where some tourist envoys from the Dragonfly Clan were getting just a little bit nosey and needed a spanking of their very own.

The game ended and I was able to win, however I suspect since I made an error with the honour system the final turn might have gone differently (Not sure, and not sure how different but it is impossible to say).  Either way I don’t claim bragging rights as this was a learn the game game.

I have to say this was a lot of fun!  We didn’t have as much negotiation around the table as the game intends.  I suspect that will happen in future games.  Set up and take down wasn’t too bad for a game with this many components.  What really got me was there really isn’t any downtime.  Even when it isn’t your turn, you get to do stuff in the political phase.  And the war phase went pretty quickly as there were quite a few uncontested wars.  The monsters were cool, but the didn’t break the game.  They were expensive, but for every coin spent on monsters, that is coin you cant spend in the war phase.  There is great replayability as there are multiple season decks which vary what advantages you can buy and the gods/shrines are chosen at random.  I like this and look forward to future games, and adding in other bits.  Because I went all in for the Kickstarter and this was only the core set.  There will be a game where I recruit Godzilla…or the scary ass tree.  See you next time!