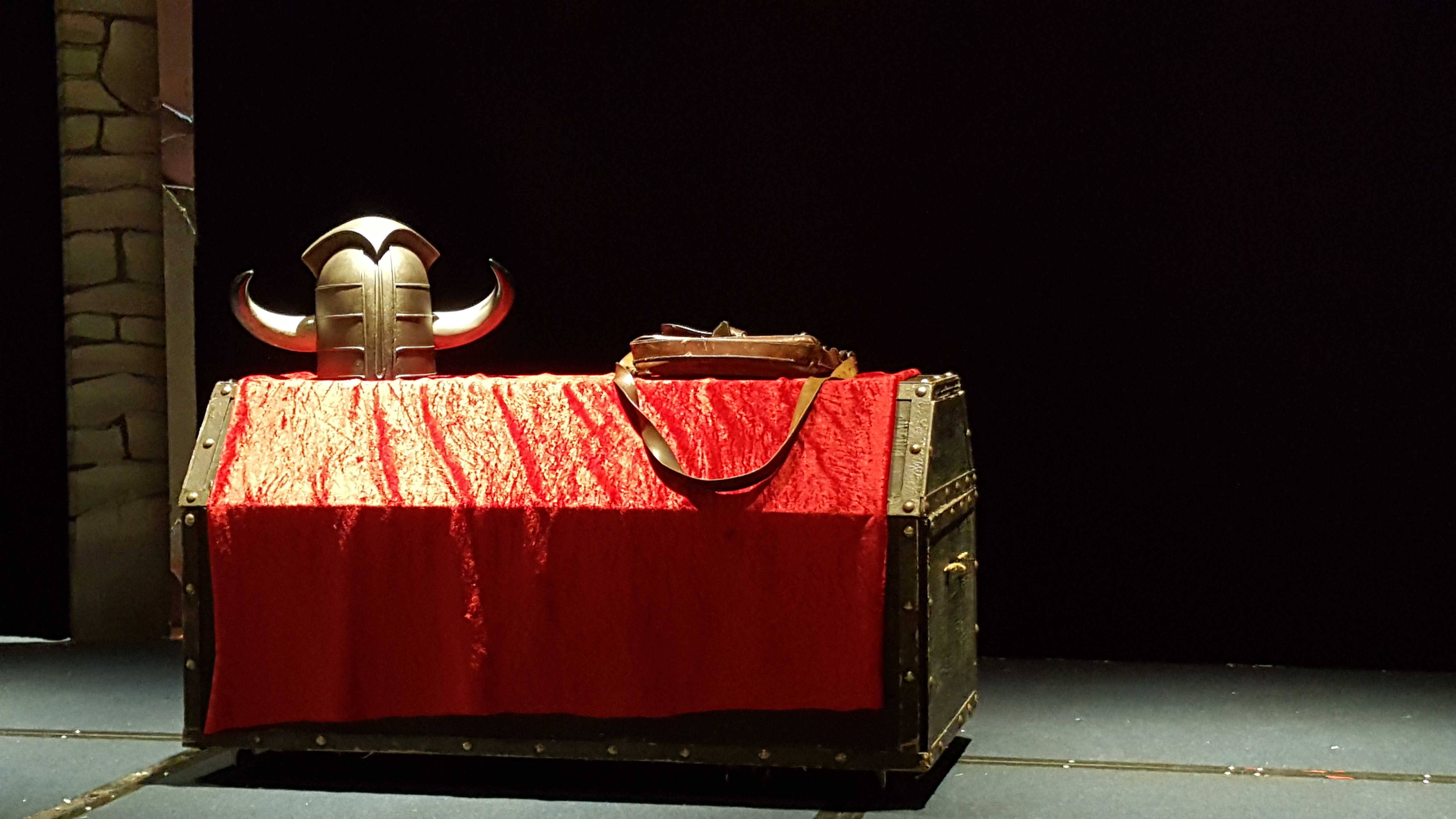 Hi folks, welcome.  Today I am going to be talking about one of the shows that I got to see whilst attending the UK Games Expo 2018.  You can read about my general experience by the clicking the previous hyperlink.  Knightmare Live is a stage version of a TV Show  that ran from 1987 to 1994.  A group of School Level contestants go on a quest to retrieve some artifact.  One wears the “Helmet of Justice” which happens to act as a blindfold, whilst the other three, under the supervision of Treguard (a wise dungeon master type), guide the Duneoneer through a series of environments made from the best green or blue or whatever screen technology of the time.  Each room that the Dungeoneer traverses has clues, roleplayers, monsters or puzzles. All the while, the health of the Dungeoneer is tracked on screen and the viewer gets occasional interludes from Lord Fear.  It was remade a few years back for Youtube Geek Week, and you can view that episode just below.

Context over with, on to Knightmare Live.  Knightmare Live is a remake crossed with a parody of the original, run by Paul Flannery playing the New Treguard.  Attendees get to be entertained by New Treguard’s banter and watch volunteers from the audience attempt to complete the given quest.  There are occasional intrusions on stage by the show’s goblins, and Lord Fear (who is trying to get #BigDaddyFear trending on twitter – by all means help him out with that!)

The show starts with goblins venturing into the audience to find quest items.

The first contestant was already being prepped backstage when the show started, and all that was required was for credits to roll.  When the original credits for the (later seasons of the) show appeared on the big screen, I am not embarrassed to say I started misting up with nostalgia.  Knightmare, the TV Show, was a large part of my childhood and one of the few truly rpg related things back in a time before it was cool to be a geek.

The basic conceit of Knightmare is that the Dungeoneer enters a new location they will ask, “Where am I?”

In the TV show, the standard response is “You’re in a room…” followed by a description of what the three observers can see.  This carries into the live show with the Dungeoneer yelling the same question, and the audience constantly yelling back “You’re in a room!”

In this particular show, the Dungeoneers were aided by Ed and Tommy of the Jollyboat Crew.  The picture shown above is one of the first (or maybe second rooms) where the encounter is with a Rabbit Shopkeeper.

Knightmare Live had nearly everything I would have expected from the television show from basic roleplay encounters, word puzzles, Goblin Horns, a Spy Glass and even a Blocker.

Blockers were traditionally the guardians of one of the levels in the Original Knightmare, posing riddles and questions for the contestants and it was good to see one included in the show.  Not sure how they were planning on having the contestant eaten by it if he had failed…

The distinct sound of Goblin Horns was always a warning to contestants that they had dithered too long and that if they didn’t move, Goblins would catch them.  The original sound effect was employed to good effect in Live.  And of course, one of the tropes of Knightmare is putting food in the knapsack to restore health.  Player one found some food after the blocker and as soon as he did, a health warning appeared on screen.  The health warnings were actually quite sinister with a human face basically falling apart.  If food isn’t put in the knapsack before the eyes go, it is game over.  Player 1 was defeated this way.

New Treguard then sent out a call for a new contestant, and I was in fact invited onto the stage as I had been emailing him through the week regarding an interview.  However I declined as I was in a serious amount of pain and I didn’t think I would be able to cope with certain elements of the game.  Enter a young lad who picked up where contestant 1 left off.  That was when we got to experience the Spy Glass.

A Spy Glass is basically a magnifying glass that contestants used to find in the show, that they would put up to the Eye Shield, which allowed the contestants and viewers to spy on Lord Fear, who performs some exposition on plot.  This happened in Live though Lord Fear’s exposition was mostly comedic about being alone and not spied upon.  Right up until the point he sensed the spying and slowly moved toward contestant 2.

Unfortunately, Lord Fear caught contestant 2 and he was returned to the audience.  Contestant 3 was a young girl called Frankie.  Frankie had to contend with a trickster who lured her into the audience and then played a game of “The Floor is Lava”.  Fortunately, as we all know, jackets are lava proof.

Frankie also had to deal with a Dragon who decided the audience would turn on him for picking on a small girl, so let her past.  A common occurrence in the old show was a ride on dragon back to the next level.  Once the dragon, who liked shouting his name, decided he couldn’t kill a small girl, she was flown to the last room. We were then treated to a video of a toy dragon on a stick flying through the countryside, filmed on a handy cam.  A Fitting tribute!

The final room in the quest, for the goblet, had giant buzzsaws.  Our fearless adventurer needed to be guided safely past in order to complete the quest.

Knightmare Live is a fun show that I highly recommend to fans of the original as it does a good job of paying tribute.  We had goblins and horns.  We had puzzles, and we had tricksters.  We had story encounters, we had a knapsack and we had a Spy Glass.  This time round we didn’t have spellcasting, or a Dreadnought.  But I am assured there are many other rooms and combinations that make the show worth a second or third viewing.  Even if you never saw Knightmare, this is still a great experience as the performers are fantastic, changing from bards, to goblins to rabbits and even scenery all the while New Treguard entertains us with humorous expositions.  Would I go and see this show again?

Yes, I absolutely would!