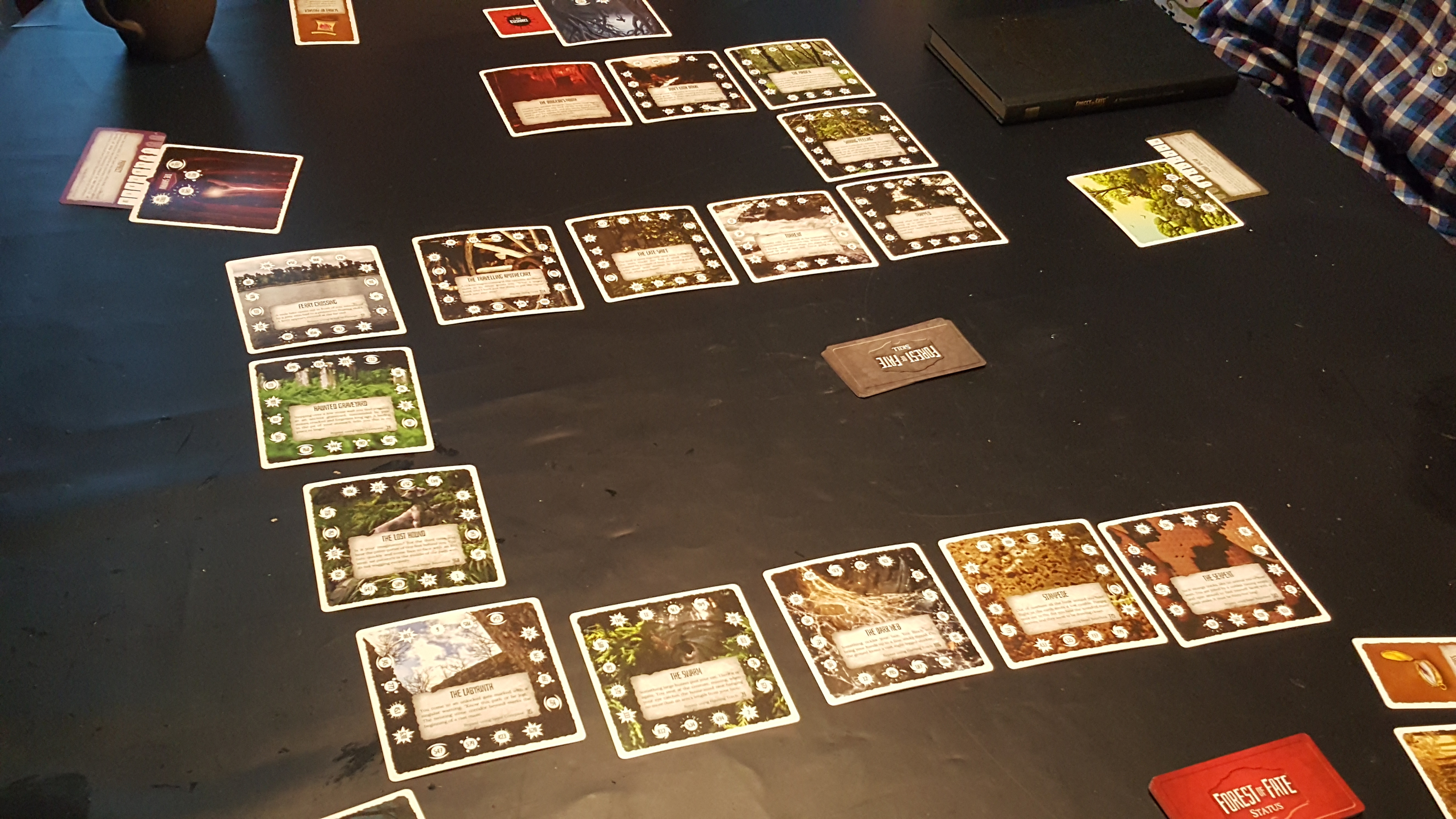 Hello everyone, welcome.  Today I am going to be talking about my first play of the game Forest of Fate.  My friend, Sarah, and I both backed this game on Kickstarter and I was fortunate enough to get my hands on a Preview Copy (which you can read about by clicking that link), and recently we were able to play the full, game in all of its glory, for the first time.

Forest of Fate is a cooperative adventure game that draws elements from classical fantasy rpg and choose your own adventure books.  Players take from the available characters, Shaman, Sorcerer, Bard, Ranger, Thief and Fighter which each have different attributes at different levels, and each with a unique class skill.  The players then build a path of facedown encounter cards, length dictated by how easy you want the game to be, and you are ready to play.

I picked the Shaman character, which had the class ability Prophecy.  It meant that I could make a prediction for every encounter on the trail.  If I was totally right (which a happened a few times) we got advantages.  If I was totally wrong, we were punished.  If I got it partially right there was no effect.  Good fortune was with us, and I didn’t make any totally wrong predictions.

For encounters we got things like rickety rope bridges, abandoned ferries on spooky lakes, Night Watchmen, Vicious Wolves and a Graveyard filled with zombies.  In every encounter there are four choices of attribute to use and players decide which is the best one.  Often dictated by skill levels.  Once a choice is made on attribute we read the appropriate entry in the story book which then directed us to a second entry based on skill level.  We played the game twice and of all the encounters we had, the Graveyard was our favourite by a long way.

Style happened to be one of the options for overcoming the zombies and as fortune would have it I had predicted style and one of the other skills correctly which meant our Bard had Epic Style.  After discussion at the table we overuled anyone who wanted to use speed, wits or guile and instructed the bard to use style to outwit the zombies.  I started doing my best Vincent Price impression at this point…

I should say my best Vincent Price isn’t that good, but we were all caught up in the idea of our Bard leading the Zombies in dance.  We consulted the appropriate entry in the adventure book and imagine our surprise, and joy, when we discovered that having epic style does indeed result in the bard leading zombies in dance!  (incidentally, wouldn’t you say its more of a Horror than Thriller?)I hope there are other in jokes like that in the game, because that was amazing and we were really happy to find it on our first play.  Chris played the bard in our first game and I volunteered the second game.  The bard had the class ability of a recuperative dance (dare I say a magic dance?)

Any time the Bard character succeeded at an encounter, we got to do the magic dance and it healed several members of our party.  Needless to say once we figured that out, the Bard was thrown under the bus…volunteered for a many encounters as we could get away with.  And any time there was a possibility style might succeed, we always chose style.  Incidentally we did a labyrinth as one of the encounters but we foolishly didn’t pick style.  I wonder if we will find a David Bowie-alike in a future playthrough, hmmm…

Using style wasn’t always successful but to be honest we were having so much fun by this point I was quite willing to risk injury just to see what would happen.  When we were accosted by a duly appointed law officer with a warrant for our arrest, style equated to mindgames which made him cry right before he hit me in the face with  club.  When bandits showed up, demanding our money, I replied “You and what army?”

So, they battered me and I barely got out with the clothes on my back.  So, not always the right solution but usually the most fun solution.

This game was great!  It was easy to learn, setup time was negligible, quality of components was great and given the random way the forest path can be laid out there is a lot of replayability (the story book entries are dictated by which side of the encounter the next one is on).

The only minor things that could have been better, there weren’t enough status cards – for instance sometimes you get dizzy or confident and we only had one copy of each.  It was also, perhaps, a bit too easy.  We managed to complete it barely on easy level in our first game.  We then did it on hard and managed with greater ease.  Also, we would have liked different victory point conditions (there is a storybook entry for you depending on how many Victory points you have at the end, but 20 seems to be the highest it would go.  We got 46 in the second, harder, game (though perhaps we did something wrong?).  These are just minor things, and we all agreed that it was a game we would be playing again.  In fact Sarah proclaimed it was the best Kickstarter game she had backed, and cheaper by a long way than many of the others.  Not sure I would say it is the absolute best but you get a lot of great stuff for a really low investment and that equates to “Absolutely worth it” in my book.

If you get a chance, check it out!  (You can do that HERE)