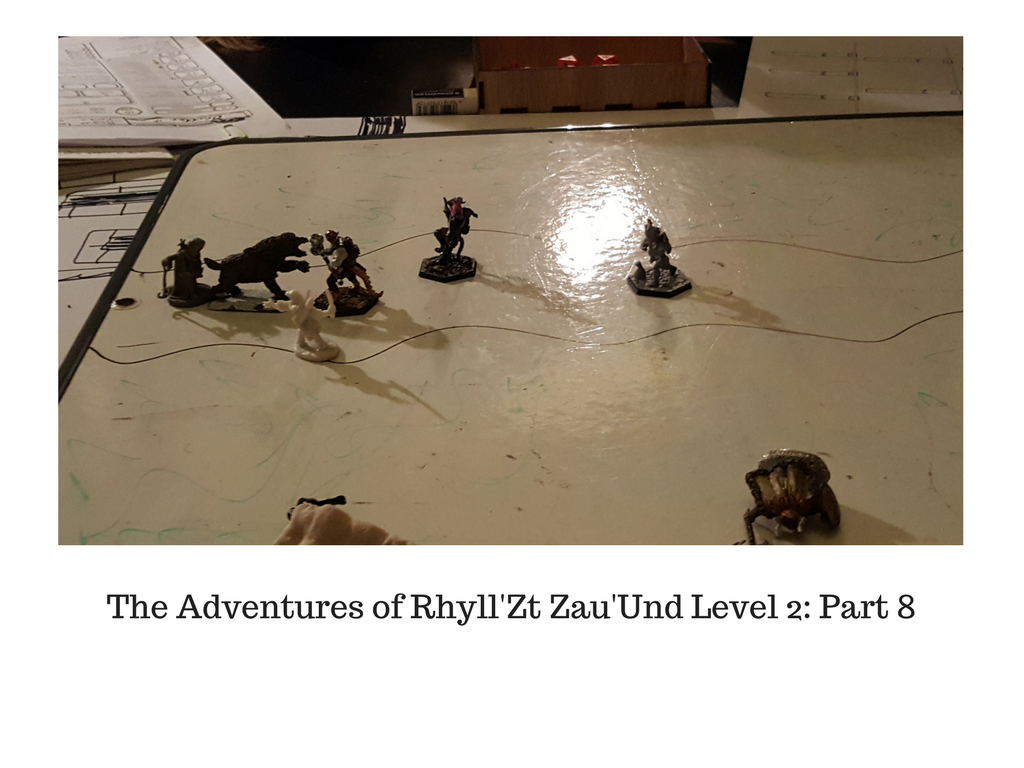 Hello again, welcome.  Today I am sharing part 8 of my Adventures as a Drow in Dungeons & Dragons 5e.  In the last session our group had traveled to the city of Ursadae, then ventured into the mysterious woods outside.  We were then greeted by an all too familiar face.

Standing in front of us was the man in Purple from our first outing together.  Muscle memory kicked in from the last time I saw him and I flung a dagger at him.  His reflexes were swifter than anticipated, and before I realised it he had flung a plantlike substance at my face, which clamped on and I lost consciousness.

I awoke lying on a cot in a small hut, fierce hunger afflicting me.  I found I was not bound in any way so got up.  All of my gear was stowed neatly near me.  So, I wasn’t a prisoner.  Curious.  I gathered my equipment and my wits and ventured out of the hut, finding myself in the same village.  I found one of the villagers, a human, wandering around.

“Take me to the person in charge here.”

The human was slightly startled but recovered admirably quickly.  “This way.  Victor wants to speak to you.”

The man led me to a hut, whose door was open.  The man in the purple robe was there, his robe open and his form rigid.

“I am sure he will be with you soon.”  The man scurried away.

A moment later he appeared to wake from whatever trance he was in.  “Good.  You are awake.  Don’t attack me again, please.  I don’t appreciate it.”

Shaking his head, he replied, “We have not.  I gather my old friend has been using my likeness.”

“As the adversary in a test.  Last I saw you, you were trying to kill us.”

“I guess, under the circumstances I am going to have to take you at your word.  How long was I out?  Where are my associates?  And do you have food?”

“More than a Day.  In a cavern, and yes.”  He gestured towards a table that was stacked with food.  Some of the villagers were eating there.  “Help yourself.  Get your strength back and then we should talk.”

I thanked him and sat at the table, never taking my eyes from him.  He remained in the centre of the village talking to villagers when he was approached by a pair of dwarves.  One of the dwarves had an abnormally wide grin.  Victor spoke to them for a few minutes before they left.  He wore a worried expression, prompting me to go speak to him.

He nodded.  “I am afraid so.  Our enemy knows you are here.  Knows about your friends’ errand.”

Glancing at the dwarves, now quite distant, I asked, “The one with the grin?”

He nodded again.  “Our foe, it would seem, can marionette people.  One moment.”

He froze , staring off into space as he had earlier.  Minutes passed.  I glanced around the village feeling just a bit uncomfortable about standing in front of him, rigid as he was.  I was perhaps a little alarmed about our enemy.

Victor relaxed again.  “Your friends are nearly here.  Make yourself ready for travel, you need to get to Kharad Kal.”

Kharad Kal.  “A dwarven city?  Why are we going there?”

“That may be where the fire stone is.”

I already had all my gear, so when the rest of our group rolled in on a cart I was waiting for them.  Unsurprisingly, Vuldin was the first to speak.

“My friend, you have awakened after your defeat at the hands of a plant.  It is good to see you well!”

Forcing a smile, I replied, “Our new friend has just had a visitor by our enemy, using a dwarf as his portable sock puppet.”

Actually I have business in this area, but the geas of powerful wizards… “Yes, I am ready.”

I hopped onto the wagon.  “How was your expedition?”

The wagon was turned around.  I found out later that we had the loan of the horse and it was smarter than the average beast.  What followed was a hodgepodge story where my companions ventured into a cave and found some small creatures, there might have been a monster living there and there might have been some theft.  This is what happens when I am forced to take a nap.

The cart stopped.  Standing in the road ahead of us was a dwarf with an obscenely large grin.  In his right hand he held an apple with a large bite taken from it.

His mouth opened, and then we heard the sound of flesh tearing and a human head poked out of the rapidly widening gash.  The dwarf body fell to the ground as if merely a cloak worn and now cast aside, the apple falling from its hand only to be caught by the human hand.  The human wore an obscene grin also.  Not too big for his face, but malicious nonetheless.  He took a bite from his apple.

“So you are the best they could manage.  I have to say, I am not impressed.”