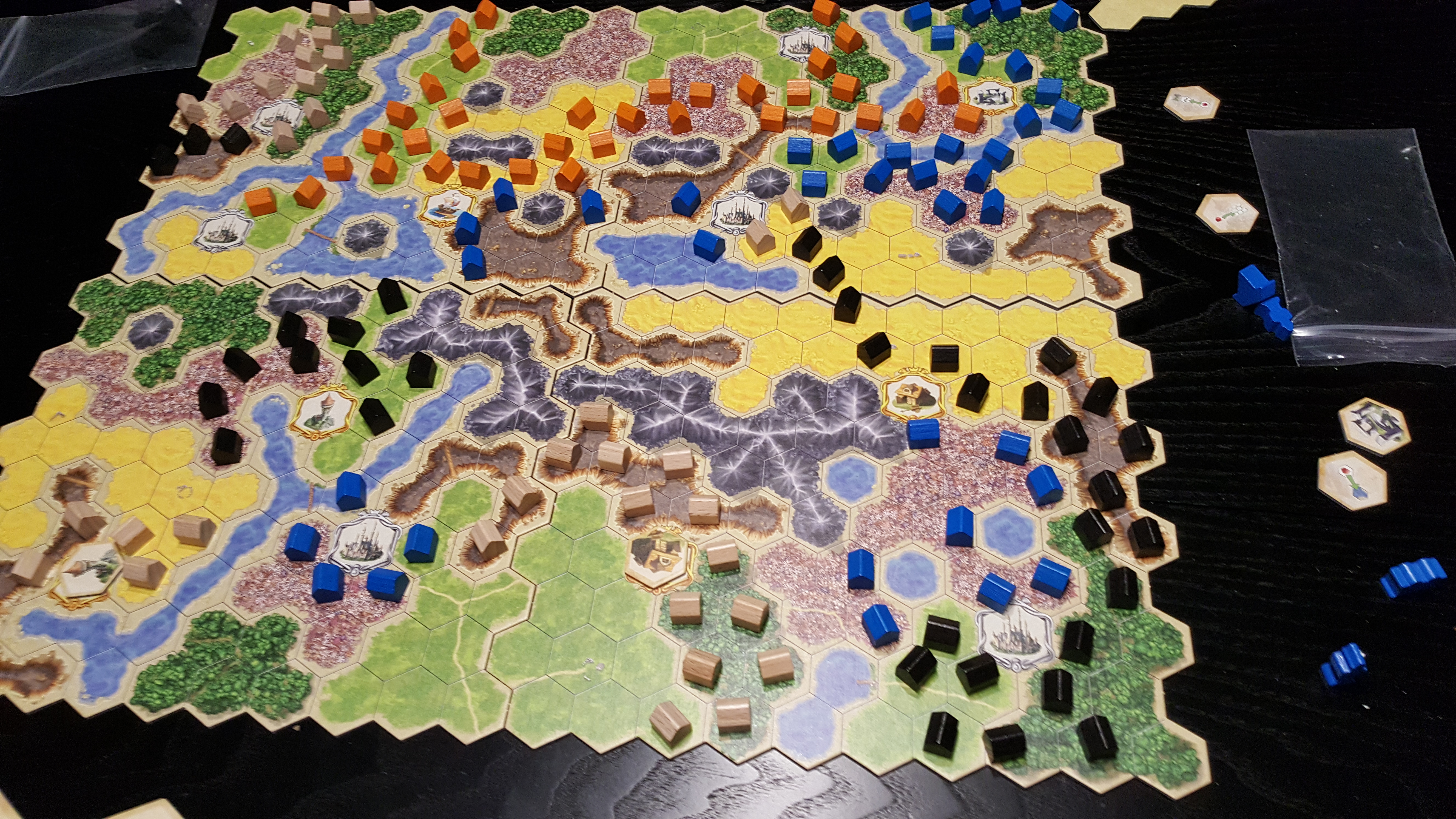 Hello everyone, welcome.  Today I wanted to write about a game we got to play for the first time, recently, despite it not being a new game.  I am talking about Kingdom Builder, which is a worker placement strategy game that has been out for a good few years.  My friend, Sarah, had the good fortune to find a sale of Kingdom Builder in a facebook group, ridculously cheap for the core game and many expansions.  And thus we played it.

We played with four players, and I have to admit I cannot recall if that was the maximum.  We set up four boards, as above, which are divided into smaller hexes, each hex representing a land type or water.  For instance, Grassland, Forest, Desert, Mountain and so on.  On each board section there are a number of special hex locations representing structures, such as castles, farms, oases, stonehenges/druid circles, ports etc etc.  We then drew three victory condition cards.  These awarded victory points for the player with settlements on the most rows, or the player with the largest settlements or settlement chains that link castles to other resources or whatever.

This isn’t the best photo but hopefully gives you an idea.  Each condition is named for a type of person/worker/specialist/whatever.

You then take it in turns to draw a card from the Land deck.  Each land type (excepting areas that cannot be built on such as mountains) are included in the deck.  We only played with the core game, however I believe it is more complex when you add expansions.  Whatever land card you draw dictates what land type you can build on with your basic action.  Your basic action being to build three settlements on the chosen land type.  Where possible, settlements must be placed adjacent to settlements you have previously placed.  Obviously, this is not possible on turn one for first placement.

Players make their basic action of placing three settlements and then they may take any special actions (detailed in a minute).

The game ends on the turn where one player places their last settlement, play continuing until everyone gets the same number of turns (play continues until you get back to player 1)

Victory points are then counted based on the victory point conditions.

I have to say, when we were learning the rules at the table this game appeared complex.  In actuality it really is not.  This was a fun, fast paced, strategic game.  I found myself studying the board intensely for the entire time trying to figure out what land cards I wanted to draw (I had some pretty poor draws in game 1, game 2 was a different story…) and what resources I wanted to grab.  By game 2 I had grasped the basics and was starting to realise that one of the things that lost me game 1 was focusing too much solely on my part of the board.  Game 2, I got better land draws (this helped a lot), and kept an eye on the other players.  This allowed me to block off a couple of expansion attempts, much to the consternation of the only teenager at the table.  Also, much to my glee.

Alexander was playing black, I was blue.  In the bottom right corner he was trying to expand int the reddy brown greyish area where I was.  I forget what type of land it was.   A few strategic placements by me and I had him blocked off.

I loved this game.  It was simple, strategic, fun and fast.  Realising that the order in which you use your special actions also made me realise that possibilities on any given turn were quite broad, so whilst the game is straightforward, it rewards thinking.  We got 2 games done in three hours, bearing in mind we spent the first game learning which slowed us down a lot.  Anyway, that was my thoughts on Kingdom Builder.  I really hope we get another shot soon!