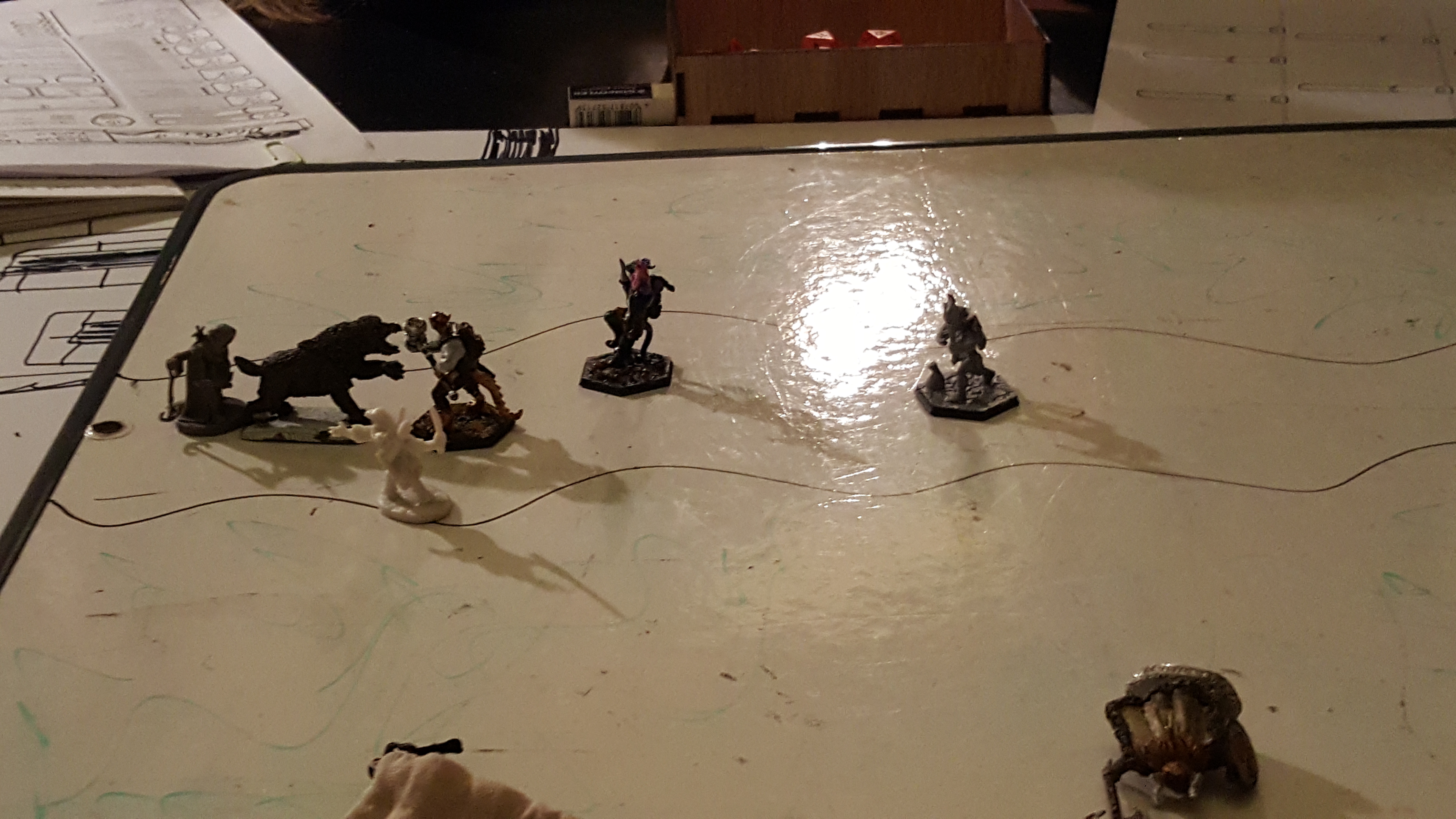 Hello again, welcome.  Today’s post is the next part in the Dungeons & Dragons 5e game I am playing in.  In the last part, my character tried to execute an elaborate scheme to get Nyssa out of a spot of bother.  The scheme kinda fell apart, but not catastrophically and the trouble she had gotten herself into appeared to go away.  We were now on our way to Strig’s sister city, Ursadae, to meet our Patron’s contact.

Having reported in to Skip and gained the details of the Guild Contact in faraway lands, I rejoined our group outside the Mageward.  We proceeded to our contact within, and were assailed by waves of stray magic as we passed through.  Fortunately there was no vomiting on this occasion, and we found our contact without too much trouble.  He ushered us into one of the more secluded teleportation chambers, and we were transported to the road outside Strig’s sister city.  Ahead of us lay a bleak looking forest.  We ventured on.

Before crossing into the forest we noted a sign that warned us that under no circumstances should we stray from the path.  That was going to pose me no problem.  We crossed into the gloom, the subdued nature of the forest killing any extraneous chatter from my companions.  Frankly, the peace was welcome.

We walked for a few miles when Nyssa stopped us.  “Can you hear that?”

None of us could hear anything.  “I can hear coins dropping, clicking together.”

Clatter opened her beak and imitated that particular sound.  “Yes, that is what I hear?”

“You can hear a treasury out here in the forest?  Coins clanking onto dirt and making that noise?”  I asked.

“Probably bait in some kind of trap,” I said.

Looking slightly disappointed, she nodded.  We continued along the path further into the forest.  Whatever had tried to lure her had failed in its attempt.

I should say, in its first attempt.

We were barely half a mile down the road when, “My friends!” said Vuldin, “Do you hear that?”

“No, Vuldin, because there is nothing there,” I said.  I continued walking.

“No, I hear the sounds of Children screaming for help.  We must save them!”

I stopped.  “There is no screaming.  It is a trick to lure you into the trees., where you’ll likely become lost.”

I pointed repeatedly and energetically at the darkness in the direction he was trying to run.  Torrin had the presence of mind to grab him and prevented him running away, at least at first.

“Wait!” said Torrin.  “At least tie yourself to the end of some rope, that way we can pull you back if we need to.”

This seemed to calm Vuldin down somewhat and Torrin tied a rope around him, all the wile Nyssa tried to convince the dwarf that there was no screaming.  Suitably secure, Vuldin ventured into the forest with Torrin feeding him rope.

“This is a waste of time,” said Cassiea.  The Tiefling looked more unimpressed than usual.

“Undoubtedly.  Who knows, maybe Vuldin will trip over some useful information?”  Truthfully I was as annoyed as Cassiea, but so long as we are bound to work for the Patron I’d rather keep a more or less civil relationship with the group, and Vuldin was useful as a meatshield if nothing else.

Torrin yelped, which is a weird sound coming from a dragonborn.  The rope which had previously been taught had fallen to the forest floor.

“Pull him back!” cried Nyssa.

“Come on,” I said to Cassiea, “We might need to help pull the dwarf back.”

In fact we didn’t.  Torrin pulled the rope in easily only to find it was no longer attached to a dwarf.

“Are all of your kind so perceptive?” I asked Torrin.  The Dragonborn growled at me and I raised my hands in a warding gesture.

“We need to go help him!”  Torrin seemed determined.

“He shouldn’t have ventured off the path,” said Cassiea, “If he is in trouble it is his own fault.  We should press on.”

“We can’t just leave him behind!  Would you leave me?”

The Tiefling shrugged.  “If you did something equally stupid, yes.  The sign was clear.”

My companions descended into bickering, Torrin planting his feeting declaring he would search for his friend, Cassiea explaining in great detail why that was a stupid idea. It fell to the unlikeliest of people to be the voice of reason.

“Everyone, shut up!” I yelled.  My unexpected outburst caught everyone’s attention.  “Torrin.  Can you see in the dark?”

He shook his head.

“We also can’t just help him.  We don’t know where he is, or what has heppened.  If we go in after him, we are all of us at risk.”

“Exactly.  We should just get a move on.”

“Not helping, Cassiea.  Torrin, I’ll be straight with you.  I think the Dwarf is an idiot.  But I don’t relish leaving him behind, because he is a useful idiot.  I can’t see a way here to help him.  But we are going to speak to someone that lives in a village within this forest.  Perhaps they know how to find lost folks.”

“But…” some of Torrin’s enthusiasm had faded.

“I’m going to the village.  If they can help I will get them to help.  Right now I can’t help him.  And if you stay, I can’t help you either.”

Further conversation was interrupted by Nyssa pointing down the path behind us.  “Uh…guys, we have company.”

Standing on the path was quite an angry looking Owl Bear.  It charged.

This was the sort of thing I liked having Vuldin around for.  Argument forgotten, Torrin countercharged the creature forcing it to come to a halt before it reached us.  Nyssa and Clatter took flanking positions at range to begin firing arrows or flinging daggers.  Cassiea began muttering one of her spells and I ran forward flinging one of my daggers into the creature’s shoulder.

A bolt of energy struck the Owl Bear from on high, as Cassiea finished her spell.  Arrows and daggers landed on the beast, however a bear’s hide is tough and it didn’t appear to hinder it much.  The beast clawed at Torrin and then snapped at him with its beak.  The Dragonborn is tough but wounds like these are quite nasty.  I could see gashes starting to appear on him.  Missile attacks by Clatter and Nyssa continued to do minuscule amounts of damage, however by that point I was able to get behind the beast and begin slashing at its back.

Annoyed by the spell, the Owl Bear knocked Torrin aside and charged Cassiea.  The Tiefling was, unfortunately, nowhere near as tough as the Dragonborn.  She was mauled quite badly in the creature’s initial attack.  Torrin and I gave chase, the Dragonborn’s maul swinging at the creature’s head striking with a crunch.  This got the attention of the Owl Bear back, which resulted in a number of other wounds on Torrin’s torso and chest.  However, whilst it was distracted with Torrin, more daggers and arrows embedded themselves into the flank of the Owl Bear, and I was able to land the killing blow in spinning slash maneuver tearing open the Owl Bear’s side.  It fell.

We assessed the situation.  Both Cassiea and Torrin were wounded.  Cassiea quite badly, though she decided she was able to walk after applying bandages to the various gashes.  Torrin fared slightly better but looked like he would require the attentions of a healer before doing anything more strenuous than a brisk walk.

“We make for the village.  Clatter, help Cassiea, I’ve got Torrin.”

No further conversation happened.  We continued along the path until we saw a village ahead of us.  A young man ran out to meet us.

“Oh my goodness, you lot look worse for wears!”

“Owl Bear attacked,” was all I could manage.

“Dead, about a mile back along the road,” I said.

“He’s dead,” the man whimpered.  I later found out the Owl Bear was a pet or friend or something.

“We’re here to meet someone,” I continued.  “I believe we are expected.  And we could use services of a healer.”

A vaguely familiar voice came from the village.  “You are indeed expected.  Welcome.”

Standing before us was the violet clad man that we had fought underneath the village of Violet Springs.  And he didn’t look dead at all.