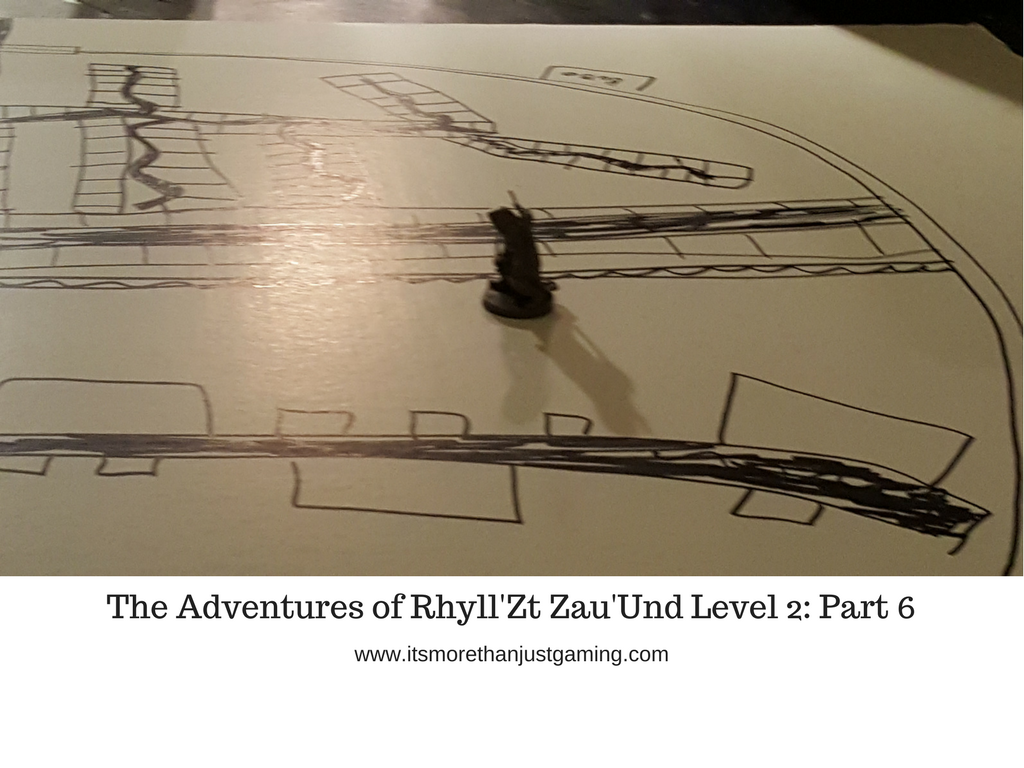 Hello Everyone, today I am sharing the next part of my Dungeons & Dragons Adventure as the Drow, Rhyll’Zt Zau’Und.  In the last installment, in an uncharacteristically (apparently) generous act, Rhyll’Zt offered to haul Nyssa’s proverbial out of the fire she had gotten herself into.  One fairly smooth trade with the representative of the Thieves Guild later, with even a contingency built in for plan failure, I left the Cut Purse feeling pleased with myself.  Onto Part 6

After leaving the Cut Purse I returned to the Alley Opposite and returned to our village.  I suggested that the Gem be hidden in the grounds somewhere, safe from the guild and others with no access.  I even offered that if our Patron discovered the Gem before we could arrange the return via the guild, we could simply tell our Patron it was there for safekeeping until it could be returned.

We returned to our lodgings and being tired, I didn’t bother sneaking in or going in separately.  Vuldin was still telling his tales of adventure as a Guard in the Mage Ward when I walked in (You can read his story HERE).  The Dwarf marked our entrance, and I decided I couldn’t be bothered with his exuberance and retired for the evening.  Barely a minute was I in my room when there was a persistent knocking at the door.

I opened the door to find Vuldin in all his spangly glory standing in the arch.  “What is it Vuldin, it’s been a long day?”

“It has been the same length for all of us, my friend.”

“My friend, I saw you returning with Nyssa and wanted to talk to you about it.  To give you some friendly advice.”

“Can’t this wait until another time?  Preferably never?”  I’ll give the Dwarf one thing, he’s persistent.  He’s also about 90% oblivious.

“A Drow and a Gnome…it isn’t natural my friend.  I have heard stories, and I have witnessed sorrow first hand.  No good will come of any such union.”

“Vuldin, its none of your business.  Go away.  Sleep Soundly.”  I slammed the door in his face as he tried to continue drawing the wrong conclusion.  Let him think that, it doesn’t really matter.  I was in desperate need of rest.

The next morning we were eating breakfast when a courier arrived looking for us, summoning us to our village at Noon.  Casseia, Nyssa, Vuldin and Torrin decided it would be a good idea to check the local notices and jobs board.  Clatter was obsessing about some stick of precise measurement, and thus worthy of no attention this morning.   I would have liked to check the notices myself, however I had other business in the Merchant’s Ward.  I agreed to meet the group just before noon in the centre of town.

I strolled through the Merchant Ward and was pleased to note that the Doctor’s shop was open once again.  The Jeweller’s shop was boarded up.  A couple of guards were questioning onlookers.  A bit of eavesdropping indicated Mr Pringle, the Proprietor, was missing.  Excellent.

I took a quick pass through various shops examining various tools and weapons, returning them whilst feigning disgust to convince any onlookers of the true nature of my errand.  I also decided that I was laden with too much gold.  Rather than risking robbery, I returned to the village of Violet Springs via the magic stone and visited the Bank there.  I was able to deposit much of my coin in exchange for a note confirming the deposit.  I then returned to Strig, sauntered past the board of notices.  There were a few inconsequential jobs, and a missing persons report for Mr Pringle.  The bounty for his return was too low to warrant interest, so I returned to the town square to meet my comrades.

The appointed hour arrived and our group had assembled, and doing so we transported to Violet Springs.  We were met by our Patron, who happened to be playing with the gem Nyssa had buried earlier.  Oh well, never mind.  At least I had told Skip that if he couldn’t arrange things fast, it might not happen.

Nyssa was quick on the uptake.  “Good, you found it then?”

Nothing more was said about the gem, which surprised me I have to admit.  The patron secreted it upon himself and then spoke.

“I have made progress and one of my contacts will meet you, outside Strig’s Sister city, Ursadae.”

“I have arranged passage via a teleportal to the city.  You then simply head out the east Road through the forest until you find the settlement within the forest.  Your contact is there.”

“No catch.  Go to the mage ward and my contact will arrange your passage.  Take the East road through the forest.  Don’t stray from the path.”

“Fine,” continued the Tiefling, “Let’s get on with it.”

“Indeed.  If you have any final business to attend to, do it now, and then meet outside the Mage Ward.  Rhyll’Zt, a word.”

The rest of the group departed. “Yes?”

He looked at me for just a moment longer than was comfortable.  Did he know what I had been up to?  He obviously knew the Gem was here but can he hear and see everything that goes on in Violet Springs?  Was this were I die?

“I have the device you asked for.”  He produced a box and handed it over.

The device.  Oh, the grappling hook launcher.  I accepted the box, noting a button to launch the hook and a crank handle on the side for winding the rope back.  This was going to be quite useful.  “Thank you.”

“I already had plans and it was in fact already nearly complete.  Don’t get into too much trouble.  You aren’t always going to be able to figure your way out of it.”

That could have been a confession that he knew exactly what I had planned, or maybe he simply knew my reputation.  I forced a smile.  “I’ve managed so far.”

I returned to Strig and hurried to the Cut Purse.  Skip needed updating.

I swear that halfling never sleeps and has the constitution of a dwarf.  He is always at his table and he is always sipping his fancy wine.  Never once Have I gone to the Cut Purse and not been able to find him.

“Back so soon?  Here to make another deal?”

“Thought you’d appreciate an update.  The Conclave got their hands on their wayward item.”

“Yes.  But, I notice the jeweller’s shop has been boarded up as a punishment to thieving without Guild Sanction.”

“Careful, Rhyll’Zt, one of these days you’ll trip yourself up.”

I shrugged.  “Not today.  I may be able to complete the other task sooner than expected.  Do we have a contact in Ursadae?”

“Our Patron is sending us there on an errand of some importance.  I daresay I could manage a trip into the city to find our missing client.  And introduce him to our local protection specialists.”

“You know something Drow, you should write all these stories down.  It would make an interesting exercise for children or new recruits to try and figure out just how much of what you say is true.  I’ll get you the details of our contact.”