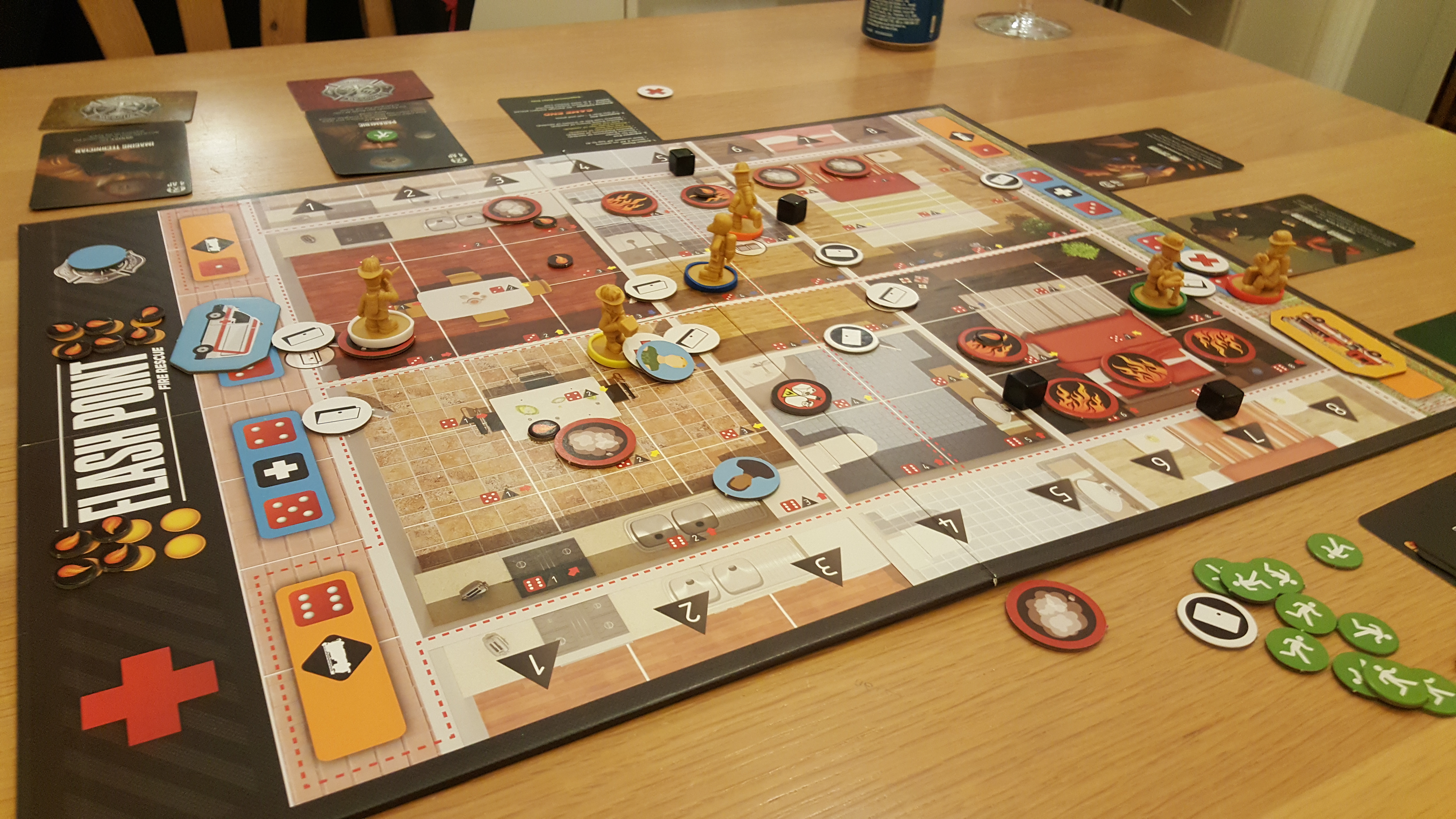 Hello everyone, welcome!  Today I am going to be talking about childhood nostalgia, and a recent acquisition in the form of Flash Point Fire Rescue.  When I was a kid I wanted to be a fireman.  I think that is not uncommon as I liked the idea of daring rescues and being a hero and so on.  However, a number of factors including laziness, cowardice and disability prevented such a career choice so I resigned myself to a life of relative safety and a career absent running into burning buildings.  But it was the first job I ever wanted and as such it sort of sticks in your mind.  So, when I got the opportunity to play Flash Point a few years back, I was very eager.  And when it returned to Kickstarter with a new expansion, I was all over it.

Flash Point is a cooperative game where players take the roles of firefighters.  A map is set up which can be anything from a bungalow to a hotel with multiple levels to even a ship in port, where a fire has broken out.  Players take it in turns to move their firefighters, fight fires and search for survivors.  The aim of the game is to get a certain number of survivors out before the building collapses or they are all killed by fire.  I have to say that after receiving this from Kickstarter, Flash Point rapidly became my most played game because it is easy to learn, relatively quick to play and actually is quite intense.  Let me outline the reasons why it became a favourite.

The Firefighters are all different

For beginner players it is recommended that all firefighters are treated the same…but since I had played before and I consider my friends to be skilled enough to handle the full rules, we played with the full rules.  Which includes different types of firefighter.  This can be important.   There are some firefighters that are great at knocking down fires, for instance CAFs Firefighter, the Veteran and the Generalist working together will knock down a lot of fire in a short space of time.

The Paramedic and the Rescue Specialist, on the other hand, are rubbish at fighting fire but are much better at getting people out.  Neither the Structural Engineer nor the Rescue Dog   can fight fire but have their own strengths (though I have to admit, without houseruling the Rescue Dog, it really is not a good choice as it is too limited).

Basically, each character gets (on average) 4 actions.  A move is an action, fighting fire is an action, chopping a wall is 2 actions, carrying something doubles your move, and operating the vehicles (Fire Truck and Ambulance) take numerous action.  When I play, my character of choice is the Paramedic.

She is rubbish at fighting fires but can spend an action to treat a wounded survivor that can then be more easily escorted out.  In essence, I like playing as search and rescue, rather than fire attack.

However, I generally don’t mind who I play (but not the Dog) as each one can be fun.  One game I played as the structural engineer.  I couldn’t fight fire, but I was able to go into the building and shore up broken walls and disable hotspots (things that cause the fire to flare up).  When I couldn’t do that, I ran outside and either jumped in the fire truck or directed the ambulance.  You can have fun playing as virtually any character…and unless you have added one of the optional rules in, you can change midgame by swapping gear at the firetruck.

The Object of the Game is to rescue people, not fight fire

This may seem like a moot distinction, however it adds to the tension in the game.  With a strong force attacking the fire, it is possible to knock it down and keep it more or less under control.  The Veteran and Generalist can clear a room pretty quickly working together, whilst the Driver in the firetruck can actually get an entire quadrant of the building under control.  And then you get to the stage in the movie where Fire Fighters are advancing through rooms, smoke everywhere and unbearable heat looking for survivors – worried that fire could and will pop up again.  The game mimics this.  You can extinguish every single source of fire, but until you rescue the civilians it will always comeback, and it doesn’t take much to flare out of control.  And if fire pops up and spreads onto a civilian, which can happen even when you thought it was safe, that civilian is dead and you are one step closer to losing.  Believe me when I say the discussions between players get quite intense as we try and figure out how best to keep the fire down, and rescue the civilians.

There are many options

The game comes with a couple of boards which means you don’t have to play the same map over and over, however, there are many expansions  with more boards which adds to the variety.  You also add into the mix multiple levels to contend with, more explosive stuff, fire doors that jam and chemical spills.  (Hazardous Materials are a part of any game, but there is a Laboratory Map which can generate spills or something like that – we haven’t played that one yet).  More than that there are optional rules supplied to add to the challenge.  For instance deal roles out randomly, and don’t permit changes.  Or if a Fire Fighter gets knocked by fire, don’t send to the ambulance.  They stay on the board needing medical attention (I really like that one).  There were loads and the Game Designers specifically state in the rules, change what you like to make it work.

I am a big fan of COOP games and I have to say this one is probably my favourite by a long way.  It is simple, the concept is one you can really get behind, and it is intense – it isn’t easy and even a building under control can flare up pretty quickly if you turn your back.  Highly recommended.