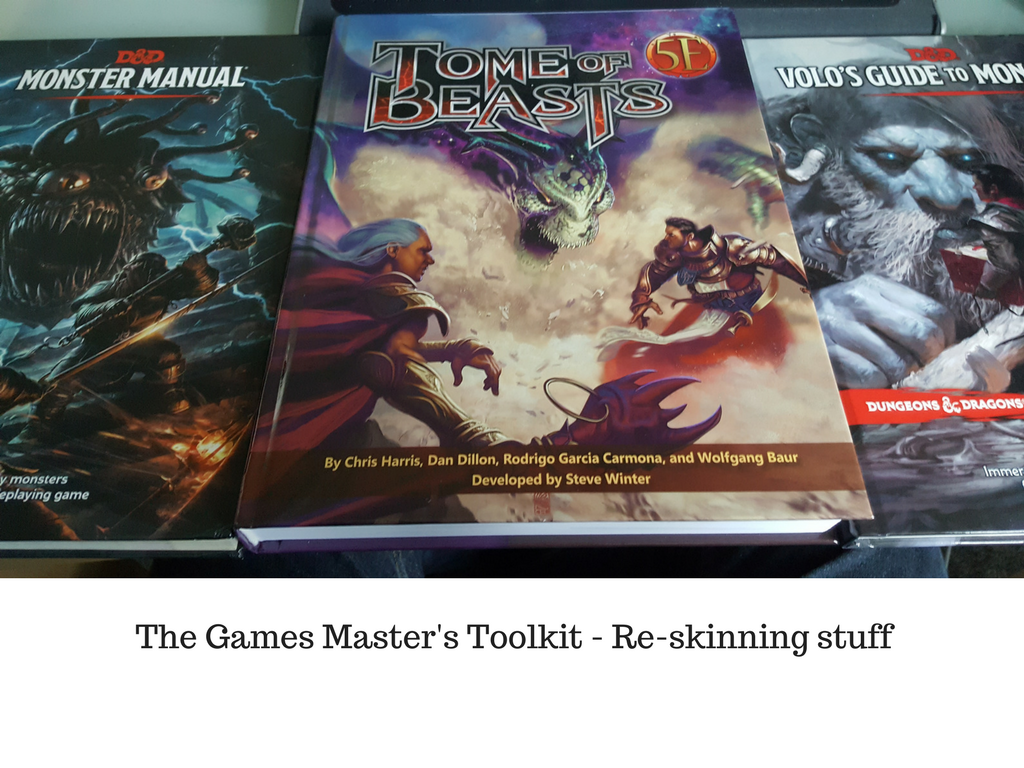 Hello everyone, welcome.  Today I wanted to do another of my Games Master’s Toolkit posts that was inspired by my mate Barry over at Random Monster Table Art (Go checkout his page.  There will be a web comic soon enough and from what I have seen it will be great).  As I think back many of these posts have been inspired by him in fact as he is the one person who has been Games Master for me more than anyone else in my entire life.  And by comparison, he is a bit non standard about some things and I like it.  This post came about after we had one of our D&D 5e games, though he has used similar things in the past.  This post is about Reskinning stuff.

In most roleplay games I have encountered there are adversaries for the players to meet and fight.  These adversaries and fights are often (though admittedly not always) an important part of games.  Any player of Dungeons and Dragons has probably encountered goblins, kobolds, orcs and skeletons and so on and so on.  And this is all great, but something has happened that perhaps no one 20 years ago might have predicted.  It suddenly became cool to play roleplay games.  As a result of that more and more people play, there are more demand and/or opportunity for games.  And over the space of a few years you have a generation (maybe not the right word) of experienced gamers who have fought orcs and kobolds and even Tiamat the Dragon.  And, as a Games Master, you have to ask yourself how you keep things alive and new for this generation of players who have seen much, and read the monster manual.  Now, there are plenty of things that you can do however in this article I want to talk about the encounters and how to re-skin them.

It really is quite simple.  Years ago I was playing a solo game of Marvel Heroic as Dr Strange.  Barry invented a story on the spot using the Brothers Grimm Marvel Villain, where they were trying to sell copies of their cursed book.  They enchanted a band that was based on Little Red Riding hood, so that men susceptible to their spell would go looking for extra-marital relations in a specific area of the city.  When they got there they were transformed into the big bad wolf.  Dr Strange responded to a distress call, I think it was from the Young Avengers, who were attacked by one such Big Bad Wolf.  There were stats for Dr Strange, and the Young Avengers and even the Brothers Grimm.  There were no stats for the Big Bad Wolf.  That was no problem.  Barry looked through the templates in the book and found a fighter villain with a ferocious streak, Gryphon.  Minus the flying he simply used Gryphon’s stats as the Big Bad Wolf.  He re-skinned him.

More recently in our D&D game our party encountered a patrol of elves.  These elves wore little in the way of armour and were civilised to begin with.  Until they discovered magic users were in our party.  And when it looked like they were about to attack, my Dwarven Diplomacy took over (I tried to impale one with my warpick).  The Elves were all wearing bracers of wood with gems on them and they pressed the gems as if they were buttons, and armour deployed along their arms.  And then over their chest, legs and head.  It was somewhere between an advanced suit of Iron Man Armour and a Guyver Unit deploying.  (Guyver is an anime about a person who has a suit of bio boosted deployable alien armour that covers him completely.)  It was completely unexpected.  Suddenly we had a patrol of elves who were now heavily armoured where they were not before.  We killed them.  Of course, and then met more like them later on where we discovered their main weaknesses were Dwarves and Gravity.  (I knocked one off the top of a tower.  The other Dwarf shot the other one from their floating leaf platform thing).  I spoke to Barry afterwards and shared a theory with him.  I asked if they were just a bunch of regular elves made for an encounter with heavy armour.  They were.  They were re-skinned elves in heavy armour.  All that had been required was to make their armour appear from a wooden bracer in a manner we, the players, could relate to and suddenly we were having an encounter with something entirely new and exciting.

I got to thinking, what else could you re-skin?

For D&D I own the 5e Monster Manual, Volo’s Guide and the Tome of Beasts.  The first thing I wanted to re-skin was the Cobbleswarm.

The Cobbleswarm is a creature from the Tome of Beasts that is indistinguishable from cobblestones when it is still.  However, groups of them will sometimes lie in wait on deserted city streets for the unsuspecting.  I loved the idea that the street attacks the adventurers.  But then you have to ask yourself, why limit yourself to cobbles?  Why not coin swarms?  Lying in wait in a perfectly normal, untrapped, definitely not a mimic chest.  What about turf swarms?  Your adventurers make camp and the grass tries to eat them at night.  Reduce the armour of the turf swarm and otherwise you have an encounter.

Sticking with Tome of Beasts, there is a whole section on clockwork stuff.  Clockwork beetles, clockwork hounds and clockwork guards.  All of them look like steam driven contraptions.  But they don’t need to.  There is nothing to say that a clockwork man or woman couldn’t be small enough to form a skeleton, with a created/contrived/polymorphed skinsuit on top.  Who is to say that the inn the adventurers stopped in isn’t in a village of automatons built by their enemy?  Or maybe it is a mystery plot with disappearances and reappearances in a city.  People will look for shapeshifters and find nothing because in fact it is skinned, re-skinned, clockwork guards.

I will make a confession.  I have not read every entry in the Monster Manual, Volo’s Guide or even Tome of Beasts.  So it is entirely possible the things that I have suggested, the alternate swarms and the skinned automata already exist in some form.  If so, then I beg your pardon.  However my point remains.  There are plenty of adversaries to choose from in various sourcebooks for any game, but it doesn’t take too much effort to take the stats of one creature and put it in the body/form of something else.  Something cosmetically different and nothing else.  And all of a sudden you have surprised players once more.  Maybe even worried players.  Your game is fresh.

Do you have any thoughts on creatures you could/would/have reskinned?  Share them.