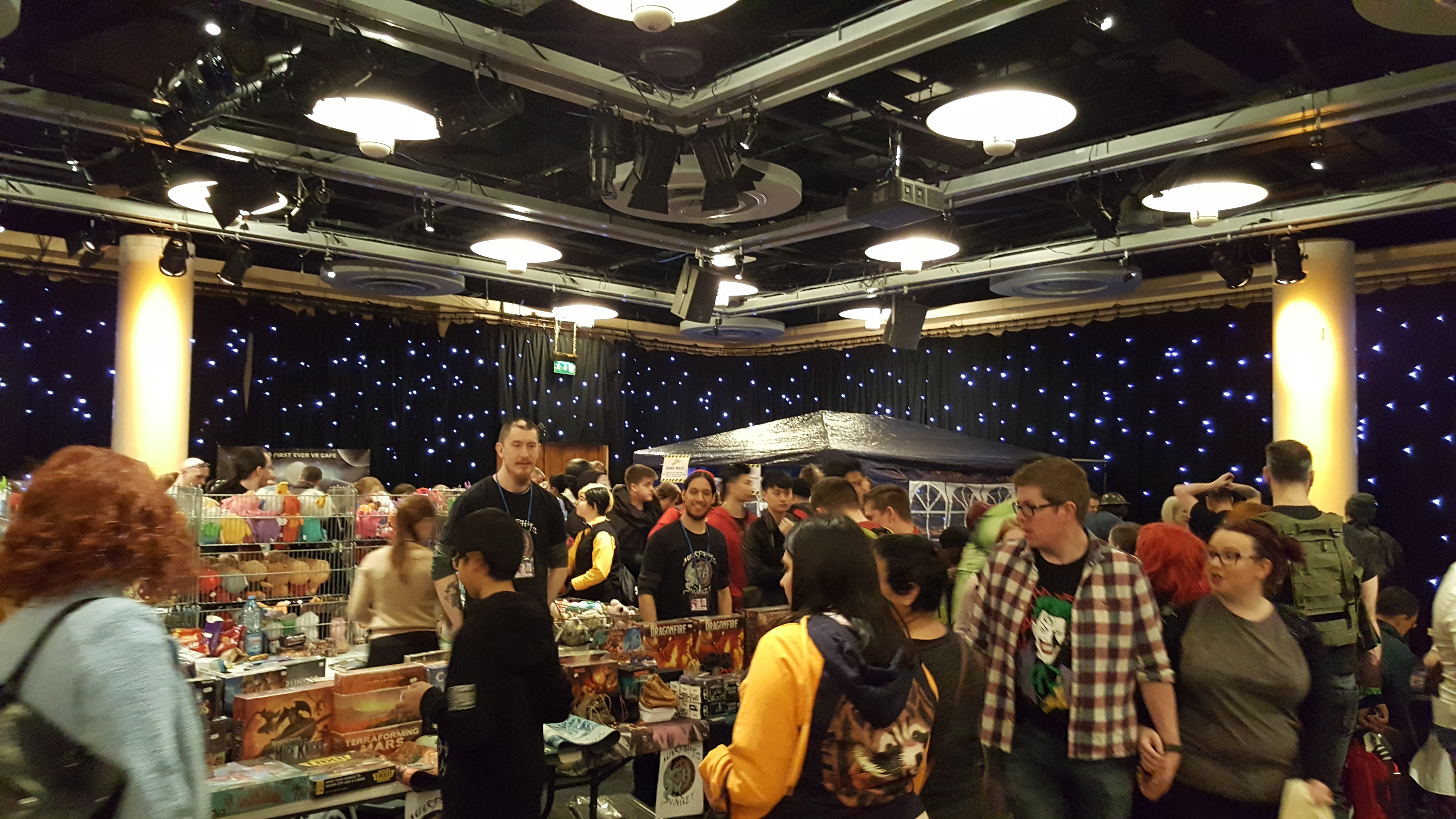 Hello everyone, welcome.  Today I wanted to talk about my recent trip to the Edinburgh Comicon.  This certainly isn’t the first con I have attended, but it was one of the better ones.  So, let me tell you about it.

First of all, it isn’t the most packed.  It is busy but the queues, where there are queues, aren’t particularly long.  There were 2 main exhibition halls, a panel room and some workshop space.  The main hall had a lot of independent traders, selling their comics, art, nik naks and so one.  It also had the best music playing over the speaker system.  I walked in during Danger Zone by Kenny Loggins, and throughout the day heard things from the original Transformers Cartoon Movie (Nothing’s Gonna Stand in my Way, and The Touch), Baker Street by Gerry Rafferty and even the TV themes for Airwolf and Magnum PI.  I spoke to a lot of the traders, all of whom were fantastic, and I bought a lot of comics…

So far I have only been able to read the three volumes of The Boat by David Lumsden.  I did this on the train home monday morning whilst fighting sleep.  It is a series set in a world where the oceans have risen, and humanity is almost gone.  Very bleak story, and there is a movie version of the first book on Amazon Prime (Not bad, but a bit unclear exactly what was going on at some points – the book does it much better).

In my first Dr Strange Obsession related Con thing, I decided to participate in a photoshoot using the Green Screen.  What do you think?  Sorcerer Supreme material?

Sadly, it wasn’t until after I had done this photoshoot that I discovered the following trinket for sale in Hall 2.

Yup, there was a vendor selling replicas of the Eye of Agamotto.  Obviously that one is the real one, me doing my part to hide it from Thanos and all – can that be our little secret?  Didn’t excpect to come away with an infinity stone.  And, every time I go shopping now I can wear that and tell the sales clerk that I have come to bargain…

There were some pretty impressive cosplays.

For the World of Warcraft fans.  We also had the NYPD and a little bit of help, providing security…

After going for a joyride on said motorcycle, I decided to impersonate a member of the World Health Organisation…

And then I found a fella who I simply had compliment for the fine duck specimen on his head.

He said “What Duck?”  I then started to tell Arthur Dent he was an Asshole again, before realising I had already done him.  And if you don’t understand why I am insulting a man at a con in his dressing gown, then you need to read the Hitchhikers’ Guide to the Galaxy.

Here are some of the other photos I got of the good folks at the con.

An Ultramarine, attached to the Deathwatch Company (I had to ask him why Ultramarines and Not Dark Angels #SpaceWolvesareMangyMutts)

And proving that cons bring out the best of us, mortal enemies posing for photos in front of the booth crewed by folks who are trying to kill them.

Of course there is a problem with all this cosplay.  The queue for the bathroom…

I jest.  This is the queue for the cosplay contest.

And what would a con be without meeting a couple of actors?

For instance Daz Crawford, who has been in Agents of Shield but I remember him as Lighthammer from Blade 2

So, there were also some panels (Dominic Keating of Star Trek Enterprise/Heroes/Desmonds/Briefly Sons of Anarchy was hilarious), a screening of Deadpool (I fell asleep through it…not as young as I used to be) and the first UK screening of a Star Trek Fan Film, Chance Encounter.  (It looked good but the scale was a wee bit off to my eyes and the dialogue was a bit clumsy, but otherwise a decent film).

Possibly the high point of the weekend was riding in an elevator with a Dalek blasting out the YMCA.  I’ve got nothing more to say after that.