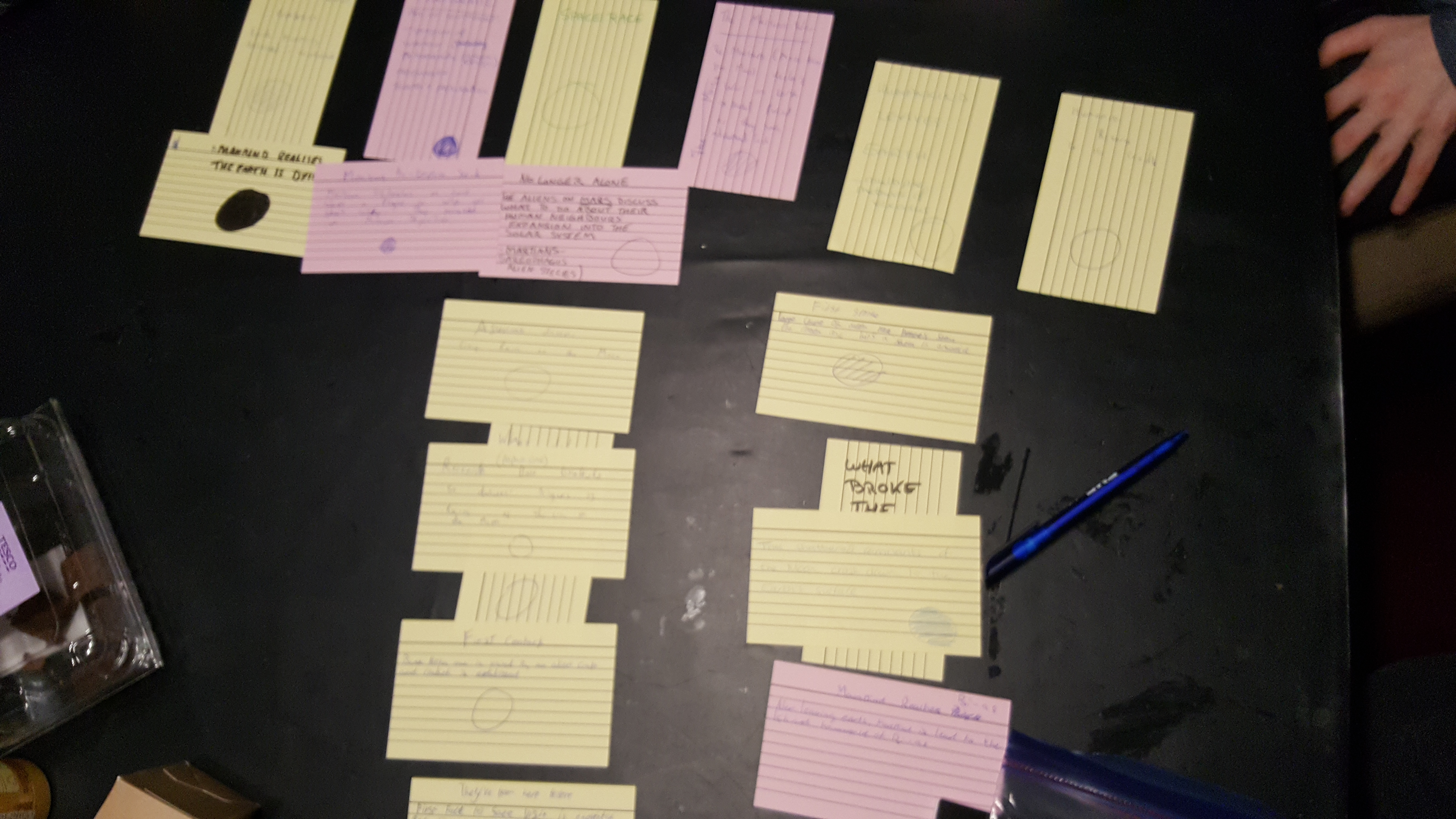 Hello everyone, welcome.  A few weeks ago I shared a post talking about my excitement for a new Roleplay Game that I had purchased called Microscope.  Microscope is a game of World Building, of building history and it was recommended to me as a game useful for creative writing.  Having played our first session, I have to say I completely agree with the assessment.

There were five players at the table, Myself, Sarah, Amalie, Chris and Alexander (all from our DnD group and I list them in order round the table, starting with me as I was player 1 on turn 1).

So, just a quick recap.  In Microscope players don’t play a character in the RPG.  They are working in cooperation, though not fully collaboratively, to create a history.  In their turn they will create a Period, Event or Scene.  A period is a long stretch of time that defines the overarching theme of that stretch of time.  It is broad brushstrokes and is described from the perspective of someone outside looking in.   World War 2 would be a period.  The Roman Empire would be a Period.   Events happen within periods and are more specific.  So, for instance if a Period is “The Something War” an event might be “The Battle of You Know What”.  Again, Events are viewed from the perspective of someone outside looking in so they supply the overall outcome of the event but not the details.  So, in creating the event “The Battle of You Know What” you would define the outcome (victory for one side or another, stalemate etc) but not the circumstances by which the outcome was achieved.  Finally, Scenes are the closest the players get to the history.  In a scene, the player making the scene asks a question about the event the scene is embedded in (Why did the 11th Tank Corp get wiped out in the Battle of You Know What? is an example of a question that would be appropriate).  The question is intended to reveal a specific detail, though from my example the questioner can create loaded questions to establish stuff that has happened.  (There is an 11th Tank Corp, and they got wiped out.  Tanks Exist).  On a quick creative writing sidenote, thinking up the phrasing of questions here is a useful thing to practice.  Note from my my original question I established a number of things in one statement.  The same is true in sentence construction.  You can establish facts about your story with loaded phrasing.  I think a scholar of the English Language might tell you this is a look at the propositional content of a sentence, where propositions are all the ideas advanced by a sentence whether they are explicit or implicit.  Scene questions are good practice for that.  Anyway, back on topic.  Once the question is asked, the questioner defines where the scene takes place.  This could be inside one of the Tanks mentioned.  It could be in a Spotter Aircraft (again, defining there are spotter aircraft) or even in the Headquarters.  They can, if they wish, designate up to 2 characters that must be played in the scene.  And they can if they wish, designate up to 2 charaters they wish to ban from the scene.  Players then choose characters and roleplay the scene (It gets a bit more technical but I don’t plan to regurgitate the rules here).  Those are the basics of Gameplay.  We were ready to start.

We decided we wanted to play a science fiction story, with the broad title “Civilisations leave their systems to explore space”.  We then needed to “Bookend” history which is where a period defining the start of our history, and a period defining the end of our history were chosen.  For a start period we chose Industrial Age Earth, People Start to realise that the Earth is Dying.  This was a joint decision.  I suggested the closing period, and though we tinkered with language everyone loved it.  Humanity returns to the cradle.

We needed to make a palette.  The palette is a list of exceptions, defining what definitely is allowed and what is definitely not allowed.

We allowed Psionics, Aliens, Magic.  We banned FTL, Cost free Psionics and Cost Free Magic.  Everyone was then allowed to add a period or an event just to get us started.  The Period “Space Race” where Humanity begins building spacecraft to explore the solar system was added.  I was happy as I then added the Event “Ruined Alien City found on the Moon”  (This was an error on my part, it was redundant as I discovered later).  We also had a Period defined as “Humanity Leaves Earth” and an event in the Space Race where the first crewed spacecraft left the solar system (though the detail of that event dictated that the ship was intended for Mars and overshot).  We were ready for Turn 1.

Given Sarah and I were most familiar with the rules, and given our seating arrangement it made sense that I be player 1 (the Lens) on turn 1.  The Lens player dictates a focus for the turn, and then play starts.  I had ideas about the lunar city so I dictated the Focus be “The Moon” which meant everything that happened this turn had to be about the Moon in some way.  As the Lens I could add 1 Period, Event or Scene related to the Moon, or two of them so long as they were nested (An event in a period or a scene in an event).  I choose to do a scene in an event.  I created an event stating that a research base is established to explore the ruined alien city on the moon (this event sort of made my previous event at setup unnecessary but these are the lessons you learn with play), and then I nested a scene within asking the question “What did the researchers find in the central chamber?”  I wanted a scene early in the game as it is the hardest part of the game, though also potentially the most fun.  I dictated that an archaeologist and a mission commander should be present and banned alien life forms.  We chose our characters.  We had a Geologist, Anthropologist, Mission Commander, Linguist and I was the archaeologist.  Gameplay requires players to share their initial thoughts or motivations before beginning the scene to help with the gameplay.  It was fairly standard, interested in the discovery, solely concerned about safety etc.  This was expected, as we were new to the game, so I decided to change it up a bit.  I decided my character was interested in the discovery but more for glory than anything else, he was coveting his Nobel Prize, he was wanting to be the father of Xeno Archeology.  I figured this would make him more brash and reckless which might push things along.  We started the scene with me describing a large stone chamber with a stone dais in the centre, with stone panels with raised symbols on all four sides.  A circular dome of stone sat in the middle of the dais.  My character rushed in all agog, seeing Nobel Prizes everywhere making exclamations about the find of a lifetime.  I then called on our Geologist to ask if there was anything odd about the geological composition and then scene played out.  We “Discovered” the dais was not standard lunar rock, the panels with raised symbols were probably writing similar but not the same as Hieroglyphs, and I was berated by the commander for rushing ahead and endangering the team.  Being distracted by the commander, my character didn’t hear when the linguist spotted a raised symbol that looked like a warning and I pressed it anyway.  This caused the dome to peel back and it was defined there was an alien corpse underneath.  (Rules grey area – technically it was once an alien life form, but not alive so we ruled it it was fine)

That answered the question and play passed on.

In three hours of play we had 2 turns.  By the end of it we had established there were 3 alien races in the Earth System during the span of our game.  The Martians had previously inhabited, and abandoned the Moon (and were now back).  They look like humans, and had a colony on Earth as did the Ish-Ash.  The Ish-Ash colony was wiped out by a Martian Viral Strike, which unfortunately caused a pandemic.  A Third, as yet, unnamed alien race travelling in a Ship called Atlas made contact with the Moon Base.  This contact was followed by the first contact team exhibiting the beginnings of Psionic Powers.  We also established the Martians returned to their other, as yet undetected cities, on the Moon and they did not arrive by ship.  We established the Martian Probe that overshot did so as a result of Martian Military hacking.  We also established that the Moon was destroyed at some point after the Martian War with Earth, and when the last evacuation ships left Earth, there were Ish-Ash onboard.

Folks were a bit apprehensive at first, the freedom of choice in this game is analogous to writer’s block – fear of the empty page.  In this game you can do anything so long as it does not break established continuity.  Folks got into the swing of things really fast though, and are really looking forward to our next session.  Can’t wait to see what happens in the Martian War.  That one was me.  I also took an established event – The Period of Contagion and established that this was caused by Martian Viruses.  What can I say?  Things were just a little bit too positive for my taste.  This is a fantastic game for the right group, and the beauty is you can play any setting or story you like.

And yes, one of our scenes was entitled “What broke the Moon?”

1 thought on “What broke the moon? Our first play of Microscope”