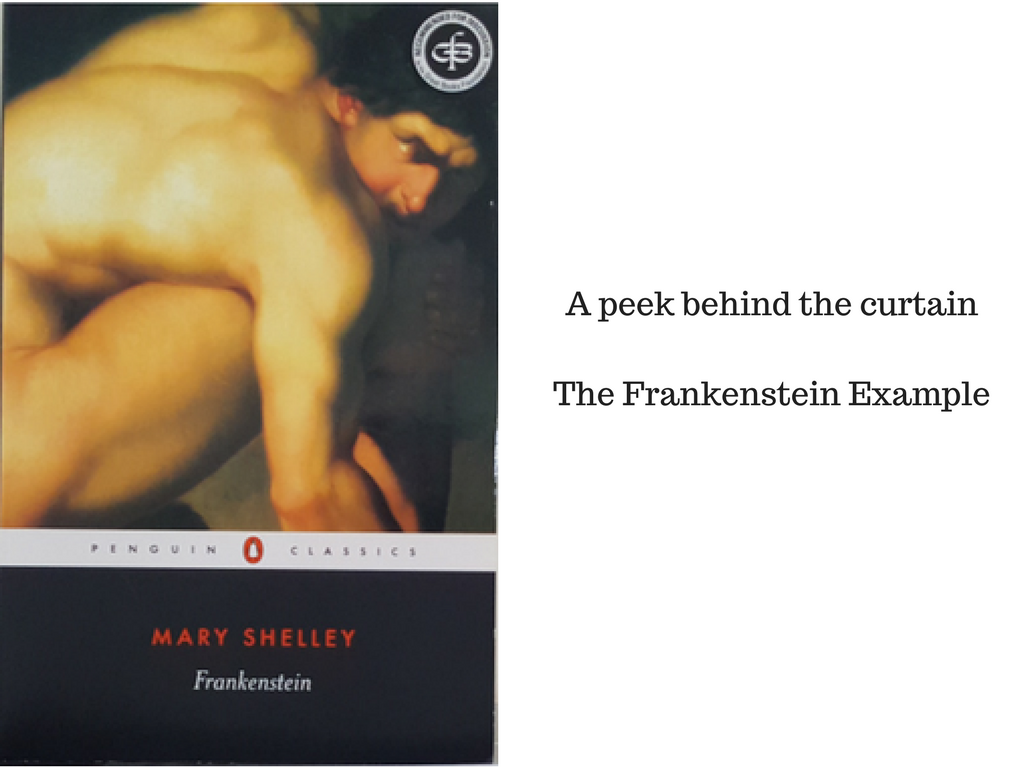 Hello folks, you are most welcome here.

Today, I want to talk about one of my favourite books, Frankenstein by Mary Shelley.  I should also say, this post contains  potential spoilers if you don’t know the story.  I would also say that this post won’t have much in the way of creative writing advice, so much as it is intended to help the reader understand stories from a different perspective.  I found, during my time at university, that if I was able to pull a story apart and figure out what the writer was doing and how, then their tricks and skills became mine to use as I saw fit.  Anyway, I am focusing on Frankenstein and if you haven’t read it, and you enjoy horror, you really need to give it a look as it is an atmospheric, gripping and multilayered horror.

I suspect if you are reading this website, you have heard of Frankenstein, at least, and hopefully are aware that it is about a man who tries to create another man by less than natural methods, and by that I mean science and grave robbing.
The tale is set around the beginning of the industrial revolution, in Switzerland, and follows Victor Frankenstein through his life. Victor is the son of a wealthy family who develops a passion for the sciences, and as he grows older he becomes obsessed with the idea of creating a man from constituent parts. He succeeds, but when he looks into the eyes of his creation for the first time he suffers some form of nervous or psychotic break, fleeing his lab in the process.

The creature is presumed to flee, and Victor blocks the memory of the event and the creation whilst trying to carry on with his life.  His health, which he neglected in the process of creation, gradually recovers despite family tragedies and it looks like he might have a chance at a happy life.  And then his creation returns, having learned that humans are cruel.  The creature recounts the tale of his missing years, and delivers an ultimatum to Victor.

This story is about Victor and his hubristic ambition.  Victor is incredibly well written and in the first chapters of the book he was a sympathetic character.   He is driven, partly by curiosity and partly by ego to discover and to challenge the unknown.  And,  as with any great tragedy this is the seed of his downfall.  In fact, Victor is an extreme egotist who challenges the natural order which, given the time period, could be interpreted as a challenge against God.  Remember, the full title of the Novel is Frankenstein: Modern Prometheus.  Prometheus stole fire, symbolic of life, from the gods and was punished for this.  Victor Frankenstein plays god creating life in death, and is ultimately punished for his arrogance.

There are a number of elements that bear further study and I will draw your attention to them, so you can do that or even deconstruct them for your own use.

Victor’s health deteriorates as he creates the monster.  It isn’t a huge leap of logic to refer to him as an Urban Gothic Necromancer, sacrificing of himself so his creature can live.  And his health is only restored when he abandons the creation, and returns to his family and more healthy pursuits and happiness.  Of course, Victor’s happiness is short lived as his life is beset tragedy, which is entirely appropriate to the undead metaphor, making Victor not only a metaphor for a Necromancer, but also a Vampire or some other form of evil parasitic spirit.

The creature, we discover, is quite capable of cruelty.  Which was hard for me to credit, given its account of the missing years.  However, I was making an error in judgement.  I was treating the creature like an adult because it could speak like one.  However, Victor’s creature was effectively a child abandoned at birth.  A child with no role model to teach it how to act, and no parent to teach it right and wrong.  As such, the creature’s psyche can be interpreted as that of an impulsive child, with no moral compass, throwing a particularly violent tantrum.

Aside from one scene, which I daresay could be explained away as a delusion, no one ever sees the creature, aside from Victor (and his victims).  Of course, the creature tells Victor he met people.  And people die at the creatures hands, but this is all an account told by the creature.  So, another interpretation, which I find intriguing, is that there is no creature at all.  Or at least, it never lived.  In fact, the horrors are committed by Victor, who has suffered a psychotic break and now believes he has a tormentor.  In fact the tormentor, the killer, is him; desensitised to death due to his grisly excavations, perhaps his psychosis now compels him to end lives to study the process by which life leaves the mortal coil.  With this information, his next effort will be successful.  Of course, even a desensitised egocentric needs some form of psychological protection from the horrors committed and so he invents the creature;  a being ostracised by society that feels justified in his murderous urges.

Of course, if I was to share this with one of my former tutors he would tell me, “Interesting John.  So what?  You can’t prove it, so where are you going with this?”

Yes, I have had the conversation with a tutor.  It proved useful as my assignment took a new direction and got a better mark.  Anyway the purpose here is not to create a ridiculously lengthy academic study.  My point was to peel back the layers of a known story and show that there are other interpretations, some almost believable and some fantastical.  In looking at my three interpretations, I think there are probably many lessons to be learned.  I will share my thoughts, however I would then encourage you to do the same with any ideas you have.

Genres are much closer to each other than you might think.  Frankenstein is a gothic horror, however, as I noted above it wouldn’t take too much to move it into fantasy horror, or dark fantasy.

Sometimes cruelty and viciousness comes from unexpected, but perfectly understandable quarters.  One of my hobbies is playing in roleplay games, and one of the scariest characters I encountered was an utterly unpredictable child, who could be innocent one minute and a murderous psychopath the next.  Also consider, childlike is often associated with innocence, however innocence turns to horror very easily when parental guidance is removed from the equation.  This brings you to “What if” writing.  What if the child was abandoned?  What if we removed this other factor from an individual?  What impact would it have.  What if we added something, instead of subtracting?  There are countless stories to be told simply by exploring what if.

“A strong enough situation renders the whole question of plot moot. The most interesting situations can usually be expressed as a What-if question…”

Stephen King, writing in the Guardian (talking about his book On Writing )

Psychology and the mind, properly employed, can give a logical explanation for the seemingly supernatural.  In fact, this is probably even more effective as a tool in horror as it has the added weight of forcing the reader to realise that it isn’t some invention of the writer, rather it is a condition that could happen to anyone.  And something like that can make a villain terrifying and sympathetic at the same time.  This is not something that should dabbled with lightly.  Study of things like psychosis, multiple personalities and schizophrenia is likely to be difficult, if not harrowing.  And you do sufferers a disservice if you misrepresent them, so if this is a route you would explore then I would suggest tread cautiously

I hope you found this of interest, and and of use to you.  These realisations have certainly helped me.

3 thoughts on “A Peek behind the curtain – The Frankenstein Example”