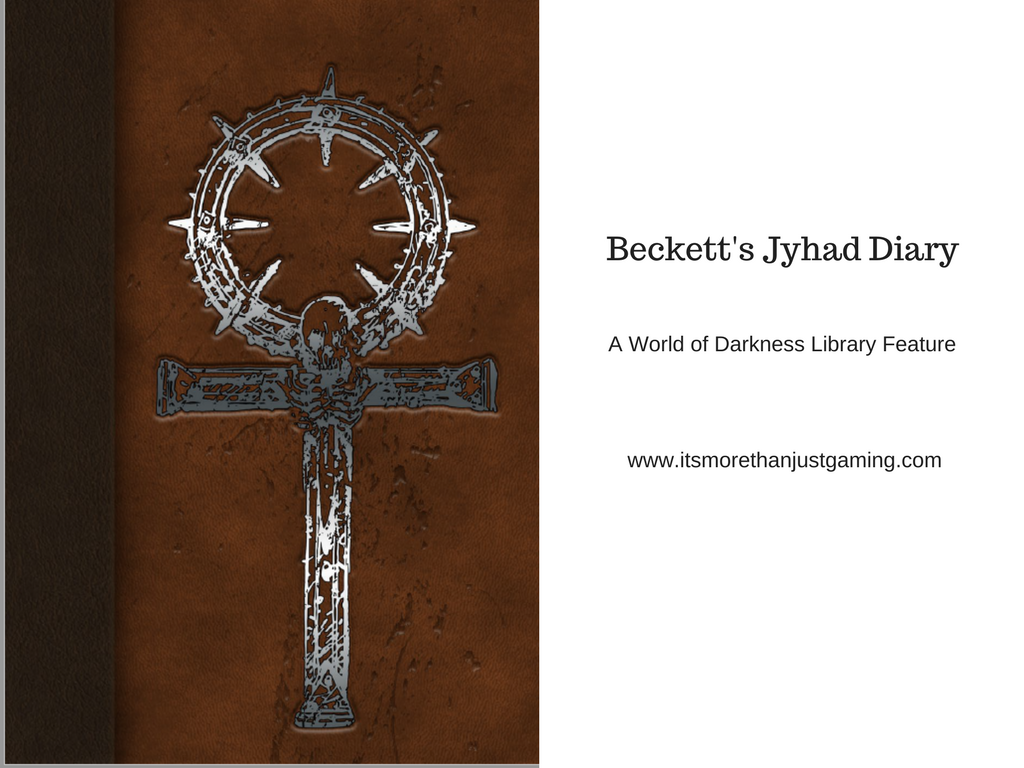 Hello everyone.  It has been a few months since I wrote about a canonical World of Darkness rpg sourcebook, and I decided it was time to remedy that.  This time I am looking at the Vampire: The Masquerade sourcebook Beckett’s Jyhad Diary.  And just so you know links within this post do contain affiliate tags, meaning if you click them and buy anything then I receive a small commission.

So, to give a bit of background, I backed production of Beckett’s Jyhad Diary a couple of years back.  I received the backer PDF before Christmas and the actual book is out now on Drive Thru RPG.  I haven’t purchased that as my Kickstarter grants me a copy of the deluxe edition which is still in production and I am too mean/poor to pay for a second copy, even at cost.  It took me a while to finish reading this book as it is 560 pages, and when you consider it is A4, then you can understand that it is hard to find the time in a busy life.  Believe me, it is worth the effort.

Beckett’s Jyhad Diary is not your standard Vampire: The Masquerade sourcebook in that the vast majority of it is written as they diary, or journal, of Beckett, one of the more famous NPCs in Vampire: The Masquerade.  Broken into about 30 chapters, the book tells the story of Beckett, a vampire Historian of Clan Gangrel as he treks around the world looking for clues and nuggets of information about the return of the Antedeluvian Vampires, the Third Generation, whose powers are godlike and whose return potentially spells doom for every other bloodsucker on the planet.  It probably wouldn’t be great for the humans either, now that I think about it.

Each chapter, not always appearing in chronological order for reasons that become clear much later, covers one such clue or nugget, a location, a clan, bloodline or even a specific elder.  The chapters are made up from hand scribbled notes, printouts of emails, transcriptions of recordings and various clippings and letters collected and collated by the titular character, followed by a section that is laid out in the more standard two column format telling the reader a little bit more about the context of what is going on and suggesting potential ways to incorporate the threads into a game of Vampire.  More than that, in several cases, it suggests a number of possible interpretations as to what is going on, including some pretty major metaplot stuff.

I’ll just take a moment to explain what I mean, for the uninitiated, what I mean by metaplot.  In all of the World of Darkness lines of games there is an overarching metaplot of all the stuff that is happening within the world, at any given time.  Various source books or off the shelf adventure books (such as The Transylvania Chronicles or The Giovanni Chronicles) cover historic, groundbreaking events whose ramifications are felt the world over.  These events often don’t end with every loose end tied up, and in fact it is more appealing when they end with a mystery or a question, which is left up to individual Storytellers to determine.  Some of the metaplot threads are given a bit more information through reading Beckett’s perspective, some even suggest what happens next (let’s just say there are a couple of clans that are about to reap what they sow…) and in the concluding section of each chapter a number of alternatives and suggestions provide the reader with plot hooks.

I cannot recommend this book enough!  Having read various new World of Darkness books over the last year, I have to say the quality has varied from very good to lacklustre.  This book falls into the former.  Beckett is a joy to read.  His constant quest for answers appeals to the Nosferatu character within me, whilst his relationships with those around him (and his relationship with the modern world) is a constant source of amusement.

I took the liberty of redacting some of the spoilers, but left the rest to give an idea of Beckett’s narration style.  Most chapters have Beckett in trouble or peril of some form or another but he always seems to find time to inject a bit of his own brand of humour into the situation (read some of the later chapters and see how Beckett deals with having possession of an item that a very dangerous person wants…) and always manages to keep his diary updated.

The humour of Beckett was not even the biggest thing for me.  The lore of the world is one of the most appealling things in World of Darkness games for me, however sometimes I want to know more.  I appreciate the mystery, and the Storyteller agency that the mystery affords, however sometimes things are just a little too mysterious, and in some cases downright baffling.  I will give an example.  I have been struggling with my understanding of a particular clan, the Followers of Set, within the game.  Their “Player’s Handbook”esque description would describe them as a clan who will attempt to corrupt almost anyone to the worship of Set.  They exploit vice and weakness, they favour serpent motifs and their signature discipline is called serpentis.  All of that makes sense.  However, when I was researching Set in an effort to create some characters with depth (and this goes back years for me), I kept hitting a wall.  I couldn’t understand the reason for the Serpent Motifs (Set is not a Snake God), nor the corruption (I found stuff that indicated Set was not in favour of chaos).  I found lots of contradictory things when researching the deity and looking at references to him in the rpg books, but it never quite added up so I came to my own conclusion and took a best fit approach.  This specific thing that was unclear to me was actually addressed in this book which I greatly appreciated (and I discovered my Best Fit was fairly close so I was happy).  I daresay there are other such mysteries solved in the text but I didn’t pick up on them as they weren’t mysteries I had obsessed over.

Beckett encounters a lot of major characters from the World of Darkness, and this was interesting but it also gives the reader an idea what these signature characters are like and how you might portray them in a game.  This is a useful roleplay tool.

Perhaps my favourite chapters were to do with the Cappadocian Clan, the Dark Ages Clan of Death thought to have been exterminated by their Giovanni offspring.  Beckett encounters several representatives of what constitutes the modern day Clan of Death and it is very interesting to see them around a table, and learn what their thoughts and plans are regarding their wayward offspring.  And whilst this was my favourite recurring story, my next favourite chapter on my list is where Beckett goes to visit Russia to learn about the death of Baba Yaga.  This was fantastic chapter and just a little bit horrifying for a Nosferatu player like myself given she was Nosferatu (and presumed to be the 4th Generation Nosferatu responsible for all Nosferatu in the world), and the hints towards scarier things in the dark more horrific than even the offspring of the Hag.  I think it was made a little bit easier to understand as I had recently skimmed through her sections in the Werewolf: The Apocalypse sourcebook, Rage Across Russia in which she features heavily as a Werewolf Antagonist.  Either way, a fantastic chapter.

And finally, perhaps the first thing that got me hooked was actually finding out what happened to certain World of Darkness characters.  A few years back I read the 13 Clan Novels which told the Metaplot Story of around 1996/7 when the Sabbat (one of the Vampiric Factions) launched a major crusade against the Camarilla (One of the other Major factions) in the USA.  In the background of the crusade story, a powerful artifact is discovered which sends one young vampire mad and destroys a large number of others when they try to stop it.  Over the course of 13 books we got to see cities fall, counter offensives be organised and weird stuff happen for reasons that weren’t clear at the time I read them.  Beckett’s Jyhad Diary not only revisits some of the unresolved plot from that particular series, it also revisits a lot of the characters offering closure.

Beckett’s Jyhad Diary is not a cheep addition to your bookshelf by any means, however, after working through all 560 pages of this tome I have to say I feel considerably more confident in my knowledge of what is going on in the World of Darkness metaplot, and to be honest I wasn’t totally a novice before.  This book helped, and it was fun and easy to read.  I’m not really sure what else I can say other than, if you can afford it, there are worse investments you could make.