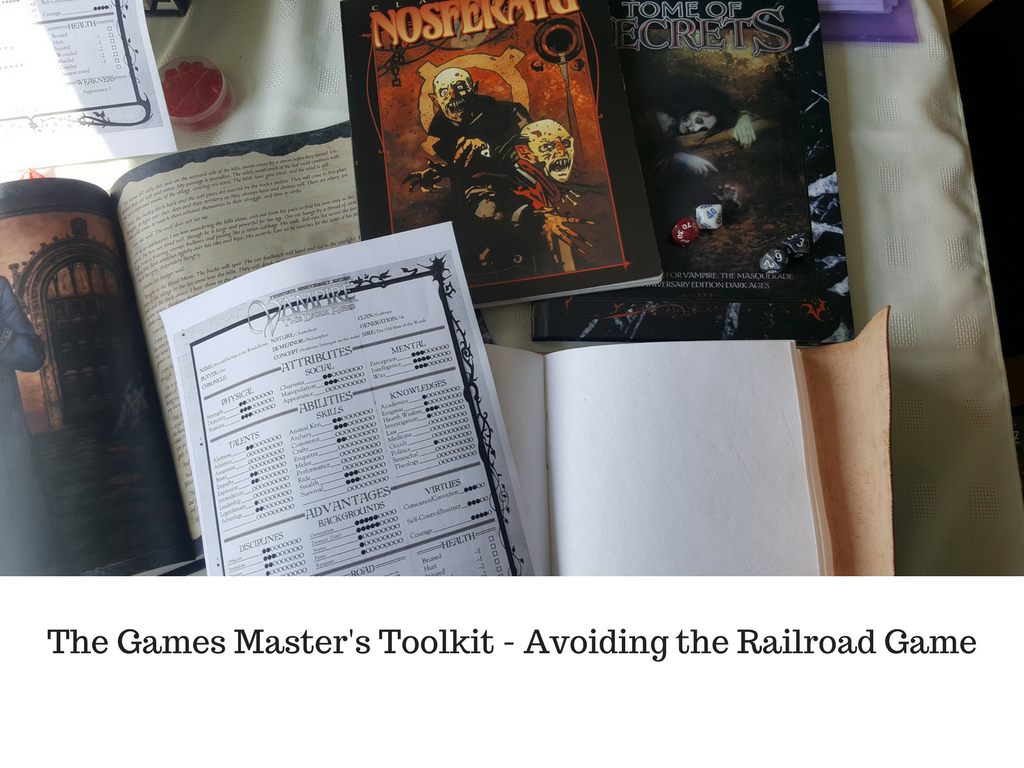 Hello everyone and welcome!  Today I am sharing another one of my Games Master Toolkit posts.  This time I have called it “Avoiding the Railroad Game”.  And by that I don’t mean trains or the RPG Deadlands or anything like that.  Over the last year or so I have drifted through a number of Facebook groups, many of which are about gaming and roleplay.  I have to say, I left more than a few of these groups as they have gotten too big to be generally useful.  When a group gets to a certain size it is inevitable that there are divergent views on literally anything and this doesn’t necessarily bring out the best versions of ourselves.  That is another conversation, perhaps, for another day.  Anyway, one of the frequent questions asked in the groups, relating to Dungeons & Dragons, was “How do I get my players to BLANK?” where Blank is whatever they were trying to achieve.

How do you make a player, or a group of players engage with your story?(Without Railroading them)

At a first glance, the very notion of the question boggles my mind.  Why wouldn’t people engage with the game you are running?

But, apparently, it happens.  So after being dumbstruck I got to thinking about.  There is a colloquial term for where the Games Master forces players down a path: Railroading.

Railroading is seen as a sign of poor Games Mastering, so if you don’t force characters to engage with a specific story thread in a specific way, how do you get players to participate in your story?  (I am working from the premise that the story you have is good, and players aren’t disengaged through boredom)

I think to answer this question, you actually have to answer a different question.  Why should they?

Why should a group, potentially who have never met or interacted together, come together to engage with a story?    This brings us to motivation (which I did speak about in my Quest for the Perfect Game series last year), both player and character.

What does the player want from the game?  If the player is looking for intrigue and mystery, then having them introduced during a random gun battle isn’t really going to hook them.  If the player simply wants to overcome whatever challenges are in front of them at any given moment, then perhaps a gun battle wild west style is more appropriate.  For the intrigue seeking player, then perhaps they are hooked into the game by overhearing something ominous.  This works equally well for the Call of Cthulhu style investigator.

Then, you want to ask yourself, what are the character motivations?  Do they seek wealth?  Fame?  Power?  If you know right from the start what motivates a character, you can set things up to entice them to make them want to engage.

In my last Toolkit post, To map or not to Map, I talked about a game I had run where the player managed to avoid all of the encounters I set up for the session and ran off script.  I was able to solve that issue by quickly assessing the broader purpose of the various encounters and then try and figure out another way to achieve that purpose.   I managed and got him to the next session.  That was a session that could have been viewed as one where the player might get railroaded.  A Powerful individual held the character’s fate in the balance and demands a service is a common trope in games, and I intended to use a variant of that.  However, given the avoidance of plot in the first session and a desire to avoid the overlord’s task type trope I had a chat with the player.  He was quite candid.  His character was spooked by his circumstances, and spooked evolved to terrified given the prevalence of bodies and weird stuff going on in the first session.  Quite simply, survival was a more important motivator to him than figuring out what was going on.  I realised that when I designed the scenario I had envisioned two or three players and they might have thought they could risk an investigation, but a solo player might not.  Fair enough.

No problem.  The next session of the game was his presentation to the great and the good, and I had intended the Prince to demand service of him for in exchange for acceptance.  Then I thought, “That is forcing it.”

I examined the motivations.

The Player wanted to play a character.  He was uninterested in experience points, he didn’t care if he didn’t have 10 O’Clock monsters, he just wanted to play his character and interact with the world I had created.  He also said, given his player’s motivations he was certain there were deals to be had and bargains to be made with the other NPCs (He was looking forward to that).  His character was researching death and the occult.  His character was naive, and nervous, but also from a cloistered life.  He might choose to embrace a plot if there was something in it for him.  So, I had the first half of a session done in a library owned by one of the NPCs.  This NPC was a scholar of medicine, death and the occult.  This was a happy coincidence, he was already written and it was a perfect set up.  If he hadn’t existed, I would have included someone to fulfill this purpose.  The player’s character was instructed in the rules of his new society, (Yep, Vampire: The Dark Ages) including how the laws worked, the importance of age and Prestation – formal trading of favours that is the only currency worth a damn to the damned.

The player went off and did player things, met the Prince and then was summoned back to the Library, where his instructor from earlier asked him if he would assist in a task given by the Prince.  I took the viewpoint as a Games Master, the Prince might be a demanding individual but probably wouldn’t assign such an important task to an unknown, instead they would assign their second.  Their second knew he would be seen as the Prince’s agent whereas the player would be seen as someone politically naive and unattached and might get information from less guarded NPCs.  The player’s response was “Is this a boon?”  He was told yes and he squealed with delight and said, “I want access to your library!”

And thus a deal was struck getting him onto the main plot for the session.

If you know what the player wants and what motivates their character, you can introduce your plot in such a way that they will jump at it.  Yes, it may appear orchestrated, but isn’t the first act of any movie or story orchestrated to get the protagonist where they need to be?

That all being said, players have a part to play too.  Players should be free to play whatever they wish within restrictions of the rules and guidelines for any given game.  It also isn’t a bad idea to give the players an idea of what sort of encounters they might face (combat/Puzzles/intrigue) so that they can make characters accordingly.  However, it is more than that.  Players have as much responsibility as the Games Master to make the game work.  So, if you have a contentious idea you might want to talk through the basics with the party.  (for instance having a Chaotic Evil Orc in a basically good party – how will that work?  I’m not saying it can’t but you probably want to think about how before)  And if you are in a party with a number of other players, then I would recommend that your character has some characteristic inbuilt to help them cooperate.

My Drow, Rhyll’Zt is anti-social.   In fact, he is not a particularly nice person who says mean things to the other party members all the time and prefers his own company.  He is, however, pragmatic.  He might not trust the characters entirely, but he does respect ability.  And he was designed with the idea that he would see the advantage in having a posse.

My previous character, Ethan/Mycroft the Nosferatu, lives in the woods and hates the church in a time when hating the church is potentially fatal.  I negotiated with my Games Master before the game started that a major thing for my character would be his territory.  He would guard it and develop it.  We negotiated that my character would be able to keep the territory (it was purchased at character creation) though the acknowledgement would come with a price tag – an overlord, and I would serve this overlord in the plot.  I was happy with that.

Railroading can be avoided, but it is my experience that you avoid the problem by solving it before the train leaves the station.

Explain what the game is broadly about (This game is a medieval horror with some intrigue and some combat set against the backdrop of the rising church in wales etc where players will be working for a patron of power). This also can take the form of a conversation with players where their expectations of the game can be outlined and the Games Master can adapt accordingly.

Players can then make their characters that will fit in that broad framework, building reasons to engage with other players (and, it doesn’t have to be easy and they don’t have to be friends.  RPG friction between characters is absolutely fine).

Games Master and Players can talk about their character goals, so that the plot hooks have the appropriate bait.

And then, once characters are finished, you should be ready to play.  I suspect many potential instances of railroading can be avoided by a little work before the game starts, and in fact it will make the game more fun anyway.

And, incidentally, if you are running a specific adventure and you are clear about it from the start, and some folks still avoid every plot hook (even the ones for them), then perhaps a conversation needs to be had about what those folks want from the game, and if that doesn’t work, perhaps it is time for them to find something more to their tastes elsewhere.  Harsh, but not unreasonable if you have tried every way to include folks.