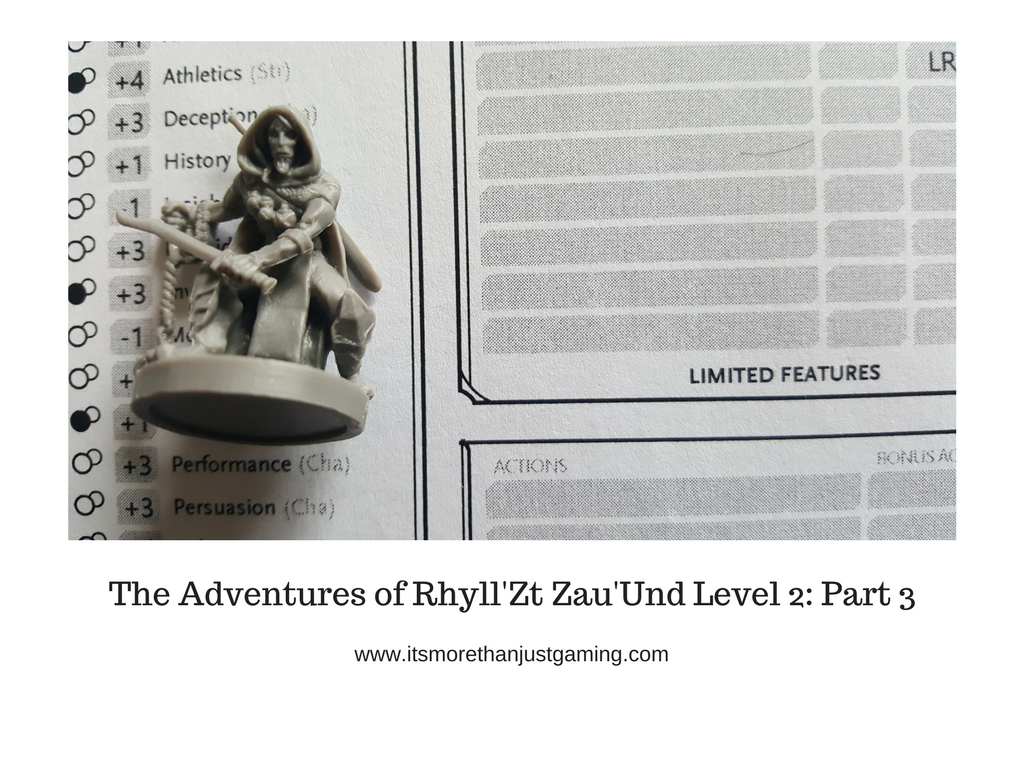 Hello everyone, welcome.  Today I am picking up on our current 5th Ed. DnD campaign where I am playing a Drow Ranger, named Rhyll’Zt.  In the last session, we defended a village from the villain of this piece and his mindslave soldiers.  Our Patron was bested and after the villain left, we decided our Patron had some explaining to do.  The following is an amalgam of a couple of sessions, including one session where we all did our own thing so I won’t be including what everyone was doing here except what my character observed.  You can follow the links below to previous parts.

Our Patron teleported us back to his headquarters in Strig.  It was a workshop of sorts, hidden somewhere in the Mageward of Strig.  There was an ornate heraldic symbol on the Wall with the letters N and C embossed within.  I recognised it as the sign of the Necessaio Conclave, a secretive order of wizards that had a base somewhere in the city.

I have learned that patience is an effective tool for a huntsman.  However, today mine was all gone.  “Ok, start talking.  Who was that warrior?”

“His name was Vorn, and he was an acquaintance of mine.”

“By Acquaintance, do you mean apprentice?”  asked Casseia.

“Sort of.  I think I should tell this story from the beginning.  You are no doubt aware that there are Gods that watch over this realm.  What you may not be aware of is that there are evil forces as mighty, or mightier, than the gods.  And in days long gone one of them cast their eye on this plane.”

His story was interrupted by a metal clang from behind us.  I say clang, it sounded like a clang that was cut short.  We turned around to see Vuldin playing around with some of the various mechanical devices in the shop.  He was examining a sphere, one just like it was rolling across the floor.  He mouthed something to us.  Then he looked more confused than normal, and mouthed again.

The Wizard sighed.  “Don’t touch anything.  Now put that back, please.”

He scooped up the wayward sphere and replaced it on the shelf next to the blessedly quiet Vuldin.

“What is that?” asked Nissa.

“One of my inventions.  Silence Grenades.”

“How much for ten?” I immediately asked.

“They are not for sale to you, Rhyll’Zt.  Now perhaps I can finish my tale?”

“How long do they last?”

“No more than an hour, now be quiet or I may find cause to use a second one.”

An hour was good by me.  I shut my mouth.

“An evil force that I shall not name cast its glance on this plane, and those in the know realised that this was bad news.  Four elemental powers of Earth, Air, Fire and Water came together and funneled a significant portion of their power into mystic gems which were then given to the strongest creatures of the elements.  These Champions drove off the great evil but not without great cost to themselves.  The Gems were lost.”

“Vorn seems to have found the Earth one,” said Casseia, “If the ease by which he trapped you is anything to go by.  Tell us about him.”

“You mean he is someone you plucked from their life, forced through an ordeal and then kept calling on them every time something went wrong?”  I could have been polite I suppose, but sometimes racial stereotypes of my kind are true.  At least I didn’t try to kill him.

“He was part of the first group I recruited to deal with a problem.  He was a fighter of some renown.”

“Does he have access to the village same as us?” asked Nissa, a little alarmed.

“No, the armour he was wearing was his reward.”

Something about that statement made sit up and take note.  Something was familiar about it.  I glanced around his workshop and there it was, nestled in among some contraptions.  A suit of armour, similar to the one he wore.

“Indeed.  The one he received was the prototype for that one, which is designed to hold all of the gems.”

“So, he wants that suit and the other gems, I take it?”

“Yes.  Thankfully, he clearly doesn’t know where they are and was hoping I could reveal the information to him.”

“But we are going to need to find the other gems, presumably?”  Casseia was to the point, as always.

“Yes.  I have a lead on one of the Gems and I have reached out to an associate.  However this will take time.  Probably a day or two.  I suggest you go about your business as normal in the meantime, and come back here when I call.”

“Very well,” I said, seeing no disagreement from our group.  “I don’t suppose you make magical items, do you?”

“Interesting.  Do you have a device that could fire a grappling hook and line up onto a high roof, by any chance?”

He looked at my with some curiosity.  “I may have something like that.  Why?”

“It’s something that might come in handy is all.  If you have one, I would like to buy it.”

The others in the party started asking about other gadgets, including an incredibly animated and totally silent Vuldin who mimed punching something.  There was an exit which I made for as I had no real reason to stick around if he wasn’t going to tell us any more at this point.  I figured I might as well make a bit of money.

Nestled in the Tavern Ward of the city there is an establishment called the Cut Purse.  I have an associate there named Skip.  Skip is a contact for the local Thieves Guild, pretty solid pickpocket and con artist and harmless looking enough that he tends to be overlooked by the watch.  Before I made it to the Tavern Ward, I realised Clatter was with me.

“Looking for work,” she said in her disjointed voice.  “You know places?”

“What sort of work?”

“You can write letters?”  She shook her.  The nodded and shook it again.  “You can fake letters?”

She nodded vigorously.  “Alright, I got someone you should meet.”

The Cut Purse is a place to keep an eye on your valuables and your hand on a blade.  You’re an idiot if you start something but it doesn’t stop some folk from trying.  They often end up face down in the river.  The place was filled with Thieves, muscle, mercs and pretty much the underside of society.  Oddly, the worst of society were the ones that treated me best.  Skip was sitting in the corner drinking his wine.

“Rhyll’Zt!  I was hoping you’d walk in today!”  He is an overly exhuberant halfling who is likes getting into your space just a little bit too much for my liking.  Probably how he is a good pickpocket.  I kept him at arms length.  There is honour among thieves, but if you can’t mind your valuables you don’t deserve them.

“I presume that means you have something for me?”

“No.  This is Clatter.  She is looking for work.  Of the writing kind.”

Skip stroked his pudgy chin.  “Hmm, that is good fortune.  I thought we were going to have to look high and low for someone of letters.  We have something for you too.  I trust she is good?”

I shrugged.  “I met her yesterday.  She didn’t run away when we got attacked by a magical warlord and his mindslave army.  I can’t speak for her competence as a forger.”

“You and your stories!  You’ll need to tell that one about the Vines attacking a village again sometime soon!  Ok, to business.  There is a Doctor in the Merchant’s Quarter who came to us for protection.  He was being bothered by an…” he leaned in to me “undesirable element.  Criminals, you understand?  And who knows who you can trust on the watch.  Everyone knows they are rife with corruption.  So he came to us, and we gave him our protection.  Unfortunately his latest bill has come due, and he seems to have disappeared making it hard to collect payment.”

“I understand completely.  So this is a rescue mission to find our client, and bring them back safely?”

Skip nodded, his face a mask of innocence.  “Yes, as you say, a rescue mission…I like that, might start using it in the contracts.  Ok, your fee will be 100 gold.”

Grabbing some details from Skip, I left.  I had a Doctor to “Rescue”.  Whether he wanted to be rescued or not.