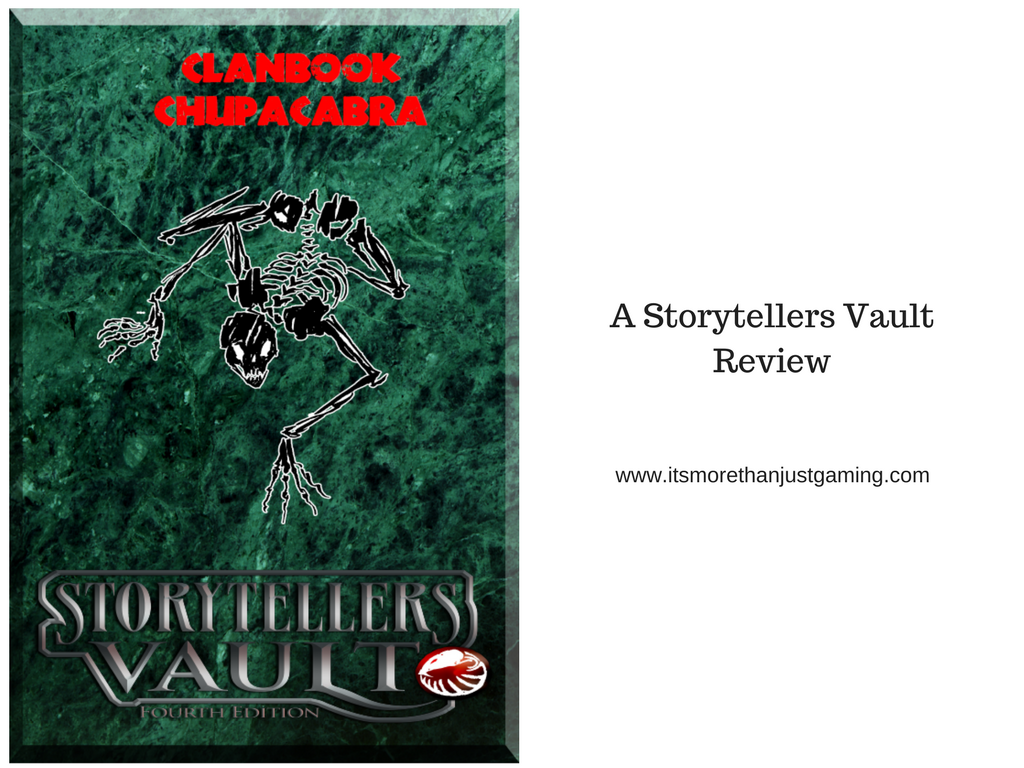 Hello everyone, welcome.  Today’s post is another Storytellers Vault review, this time for Clanbook Chupacabra.  Official stuff out of the way with first.  Evan Berg, the author, kindly gave me a copy of Clanbook: Chupacabra for free for review purposes.  There will be a link at the end of the post to Clanbook Chupacabra on the Storytellers Vault.  That link will have an affiliate tag meaning if you purchase anything on the vault after clicking I gain a small commission.  If you do not wish to click an affiliate link, you can use the following link to the Storytellers Vault.  Now that that is over with, onto Clanbook: Chupacabra.

As the name suggests, this product is a (short) Clanbook introducing a new bloodline of animalistic Vampires, based on the Chupacabra mythology of parts of the Americas and Puerto Rico.  They are introduced as a recent phenomenon in terms of existence, their creation being something of a (speculated?) perfect storm.  The end result is a blood line of Vampires that look more like beasts than even Nosferatu or Gangrels, and that tend to subsist on the blood of animals.

The Clanbook also provides details of their inclan discipline, Miasma, a gaseous method of delivering various types of attack.

The author also supplies stereotypical views of how other clans see the Chupacabra, and how the Chupacabra see the other clans.  For a bit of flavour there is a small piece of fiction set on a Puerto Rican farm which sets the mood for you, and there is also an introduction by a Kindred researcher who has made the study of Chupacabra his (or her) current work.

I liked this premise of an animalistic vampire forced to live apart from humans and the (relative) safety of the larger sects.

I had plenty of ideas of how I might incorporate Chupacabra into plotlines, though I have to say in every idea I had, they were creatures on the fringe (at best) or bogeymen (at worst).  I liked the idea of one sect or another finding a nest of them and dominating/blood binding them and sending them to cause chaos in a city of the other side.  I liked the idea of changing their weakness ever so slightly so that human blood is no longer vile tasting to them.  Rather I wanted them to thoroughly enjoy but draw little sustenance, thus making them more dangerous to humans and other vampires.  I also liked the tragic idea of a colony of them living on the outskirts of a city, trying to maintain their humanity and anonymity by simply hiding and feeding on animals.  That would force the players to answer questions, pretty deep ones, about humanity and civilisation.

I liked the idea of Miasma as a discipline.

The Stuff you need to make up your own minds about

Miasma, as written, requires too many dice rolls – the mechanics start to overburden the game here.

As noted above, I would change the clan weakness ever so slightly.  This isn’t a problem with the book as such, Berg rightly points out at the start of his work that readers should feel free to change what they like about it.

I would have prefered a bit more mystery and speculation about the Chupacabra’s background.  I realise that when source books get too speculative, it sometimes looks like the writer couldn’t make up their mind however in this case I think mystery would have served better.  What was posited by the kindred researcher as the origin of the Chupacabra was perhaps the weakest area of the book.  On the other hand, we aren’t talking millennia of lore here, such as in the other clan/bloodline origins so any storyteller should be able to either work with what is provided or create their own background.

This feels like quite a short review, however, the product is pretty short.  I guess the important question is, would I ever use this book in a game?  And the answer is, yes, I would.  Probably more to create vicious, feral, advanced wights that will make the players terrified when they encounter them, and doubly so when they ask the Nosferatu Elder what they just saw, and the aged, sage monster who knows everything says “I have no idea.”

I feel I would change things, but that really doesn’t bother me.  I change established stuff all the time for my games, just to spice things up.  Would I use this book.  Yes, I would.

You can get Clanbook Chupacabra on Storytellers Vault