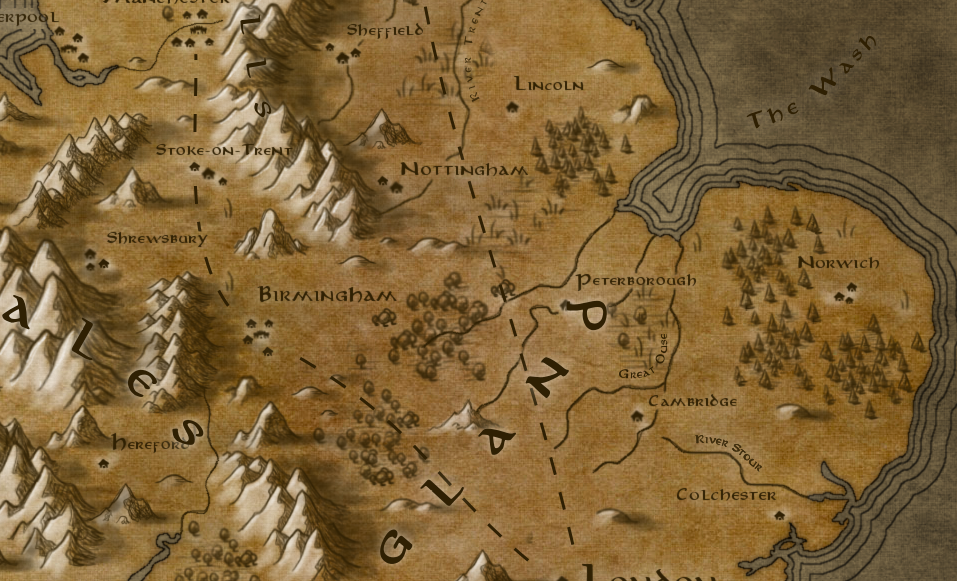 Hello everyone, welcome.  Today I thought I would talk about an aspect of RPG that is a fairly recent phenomenon, to me at least.  If I am honest with you, the phenomenon is probably older than me, let alone older than my enjoyment of RPG.  This phenomenon is the use of Maps whilst playing your game.

My first roleplay experience, back in my teenage years, was playing a game called Shadowrun.  I played a troll, called Zack who had lots of firepower and a couple of spells as well.  My friends and I would sit around a table for four hours on a Saturday afternoon playing the game.  We had our character sheets, pens, pencils and dice but not a map in sight.  I played other games with these folks, some science fiction and some fantasy and even graduated to World of Darkness in my twenties (I had LARPed World of Darkness in my teens but never did tabletop).  We never used or needed maps.  You were either in combat or you weren’t.  You were investigating a place or you weren’t.  You were talking to someone or you weren’t.  So, it came as something of a surprise when I started seeing Dungeons & Dragons on things like the Big Bang Theory where the players were using miniatures and boards and things.  And I thought to myself, “That’s Heroquest, not Dungeons & Dragons!”

However as years have gone on I have seen more and more people using maps to track their games and particularly on the encounter level.  And I have to admit, when I was a kid I enjoyed drawing maps, so I started to become intrigued.  Going back to drawing maps as a kid, they were usually fantasy islands, with monsters and wizards and pirates and swamps etc etc.  They looked really cool to 7 year old me.  They look really cool to ** year old me now.  The thing is I always drew grids on them.  I always thought they would make really cool setups for games.  The mine was a place you could do a thing.  So was the swamp and so on.  I didn’t realise it but 7 year old me already had the GM bug long before I had ever played a roleplay game.  This helped me take the plunge and get a piece of software, Campaign Cartographer 3, to try making my own and seeing what the fuss was.  I still wanted to know the answer to the ultimate question, “Do roleplay games need maps, or should they be theatre of the mind?”

In the name of science I did a test.  I had a scenario sitting in my back pocket and my friend, Barry, was wanting to play in a game.  I should mention, Barry is one of my oldest friends and is currently running a long term Dungeons & Dragons 5e campaign for us, and he is a freelance artist and designer over at Random Monster Table Art (Check him out, he has done loads of work for me).

He created a character.  The game was Vampire: The Dark Ages and I had him create a human.  I asked for and obtained his permission to assign a clan and his supernatural abilities as I wanted the game to be about discovery. (More on that in a future Games Master’s Toolkit) I had him load up Roll 20 and he was presented with the fantasy still image of the English Midlands (above – the Image is by Callum Ogden from D20ART).  I then read out the scenario introduction.

“It is late at night.  You can hear the wind outside battering against the walls of the house you find yourself in.  You can hear shouting, an argument of some kind over in one direction.  You can hear animal howls carried on the wind.  You feel a powerful pang in your gut.  You can feel dirt on your face and getting into your mouth.  You are lying on a dirt floor, and you have no idea where you are or how you got here.”

I could have described the layout  of the room, but instead I had a map prepared for this.  This is what he saw.

I should mention this is a screenshot of Roll20, seen as the player would.  The Token above the bed is not mine, Barry found on the web and as it was just for private use we borrowed it as he wanted his character to look like that.  Hilariously, the character didn’t know he was ugly, at this point, which led to much mirth (silent mirth on my part) when he encountered people who treated him like a monster and he didn’t know why.  The diver token also isn’t mine but was found for our Dungeons & Dragons game.

Barry was surprised when he saw a map.  He wasn’t used to it because he doesn’t use them.  He wasn’t put off, and his first question was how  many spaces he could walk.  That was my first strike against maps.  I wasn’t imposing limits on movement.  People would catch him or they wouldn’t, the difference of a few feet made no difference to me.  I told him so, he was fine with it and started exploring.

I described the room.  An empty firepit with glowing embers, a metal bath (quite rare in the time in question), a bucket, a cupboard with food.  A table with half eaten meals on it, two chairs in front of it and a sealed Jug underneath.  The door is open and there is a window.

Barry started a search of the place, looking for clues to what was going or even weapons (He stole the knives from the food plates – better than nothing).  He was mindful of the window and the door.  And as he was playing a character of a nervous disposition he became hyper alert and crept up to and crawled under the window towards the door and started peeking round.  He saw bodies in the street and decided to crawl out the window instead.  I feel that in this case, the map actually helped build the tension quite a bit.

As he ran down the street he heard an argument going on and not wanting to be discovered turned about and ran back to the quieter end of what turned out to be a farming hamlet.

Barry found himself outside the original house and there were a collection of dead bodies.  Now, this may have been an encounter or a red herring, I won’t say.  However I will make the following statements.

There is one groups of multiple bodies in drab colours facing one direction.

There is a singular body, wearing a blue dress lying facing another direction.

There is a singular body lying apart from the others with slightly more blood spatters and lying a different way.

I could easily describe this situation.  However, let us say at least one of those is a clue.  In a novel the description will be a piece of polished fiction that tells you what you need to know to get the clue, but polished writing doesn’t happen in the first draft in my experience.  So, I am limited to a verbal description.  But in a panic I might forget the key phrase that indicates something is odd about what folks are seeing.  So, instead I used a map.  I placed the bodies the way they needed to be, be they a red herring or a clue and described the scene once and allowed Barry to assess what he was seeing, allowing him to do some of the figuring out for himself.

I think this is one theoretical point in favour of maps as I coulldn’t prove it since his character freaked out at the bodies and then ran away.  In fact, he managed to avoid 90% of all the encounters in the scenario causing me to throw out my prep work after about half an hour of playing and having to wing it for the rest of the game.  That wasn’t a problem, it resulted in some beautiful roleplay from him (a timely nervous breakdown on the part of his character proved to be very helpful to the plot) and we got to where I needed him to be (despite him heading in totally the opposite direction – that was funny).

We did actually have a short combat encounter in the game, however that happened well after we were off script and without a safety net.  And neither one of us actually felt it(the safety net of a map) was needed.  Combat was one on one with the villain’s buddies jeering from the sidelines, and they were in melee range right up until Barry discovered his character had super-strength and knocked the villain flying.

My conclusion.  I think maps are a helpful tool, as using things like the fog of war feature in roll 20 (or lots of post it notes if you are using a printed map) actually shows the player they really don’t know what is round the corner.  This adds to the suspense, particularly if you have a paranoid player/character checking for windows and lines of sight.  You can also set up visual clues to add challenge to the game, meaning the players need to be paying attention to their surroundings and even if they didn’t hear everything you said, they have things to look at around them.  You can also have players set up sophisticated strategies for dealing with problems, such as building traps over the entrance to a village about to be attacked.  It is easier to do that if you know what the village looks like.  Using the trap example, what if you fortified your village as best you can but there is a weak point?  The fact that you can see on your map that there is a place the enemies can get in is going to increase the anxiety.

However, I don’t really think I will ever get used to the idea of using them to track movement.  I don’t see me ever doing that.  The reason being, the players are the stars of the show.  And unless it is dramatically the right time, the heroes are always able to close with their foes when they need to.  Unless the villain is about to reveal his master scheme and gets away to be fought in Act 3.  In which case, tracking movement would diminish the drama of the Heroes’ defeat.

I suspect not everyone will agree with my perspective.  That is fine.  I suspect some folks enjoy the structure of the rules and the balance they perceive it gives to their games.  This is also fine.  Whatever works and is fun for you is absolutely what you should do.  I will never complain in a game where maps are used, nor will I complain if they are used to track movement or any other reason than the ones I have mentioned.  If a person is good enough to run the game, you should be a gracious player.  Ultimately it is all about having fun, so do what works for you.

All the best, and see you next time!

2 thoughts on “The Games Master’s Toolkit: To Map or not to Map”